I know two people (Nancy and Laura), who routinely ride their bikes between Hartland and White River Junction (my 33 mile goal).  They most often are commuting, but occasionally they carry loads on front or rear racks.  They are much fitter than I am.  I used them as role models for this project, with the qualification that my bike was going to have to help me out a bit.

There are also hundreds of thousands of people in Amsterdam and Copenhagen racking up about 2 million kilometers each day on bicycles.  They can't all be fit, and they are going to work in work clothes.  On their upright posture bikes, people wear skirts and suits.

When I was a kid, an "English" 3 speed was the bike to have, (with derailleurs becoming more common just before I got my car license).  These were practical bikes, I rode mine for miles around town, including shortcuts through wood paths, corn and potato fields, and miles of state forest maintenance roads.

Strictly speaking, a regular electric bike would probably do my current errands with some fussing during packing the loads, but the pick up truck nature of the bakfiets makes it much easier.  A few things I've carried (like 30" x 40" foam core energy committee posters) will probably be easier on the longtail, the only place for them on the bakfiets is taped on top of the solar panels.

During initial layout of the dimensions, Karen asked for the bike to be able to carry compost in 5 gallon buckets.  I designed the cargo box to fit 3 buckets, but then moved the battery from outside to inside the box, so it now it only fits 2.  If I were to build another bakfiets, I would shorten the box several inches to just fit the 2 buckets and battery.

I've ridden in pouring rain, and the inside of the bakfiets cargo box stays dry, but overall weather is another issue.  I have a few ideas, but they are going to have to wait until the third bike..... 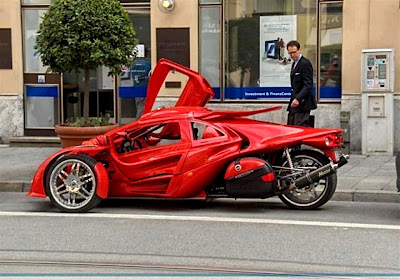 Just kidding! This is a trike, and I'm sticking with two wheels!  (This photo appeared on an Italian blog and I'm unsure of the photo credit.)