I want to emphasize that the numbers in this post are preliminary.  I would not publish a report using them until more sample points are added, but these numbers are still helpful for seeing general trends.  Basic answers were figured out last summer for the most asked questions, and I've realized that it won't be until next summer that much more data is added, so I'm posting what is available now.

For a little over 200 miles during the first three months of last summer (2012), there was no measuring device on the bike.  The only energy use data from that period is from a Kill-A-Watt P3 meter used during recharging the battery with the plug in charger, and measuring the mileage when the same trip was repeated in a car.

Then I installed a Cycle Analyst, which is a speedometer meant for Electric Vehicles.  In addition to the usual speed, time, and miles, it also tallies Volts, Amps, Amp hours, Watt hours, Watt hours per mile, regeneration Amps, battery capacity and battery life cycle count: 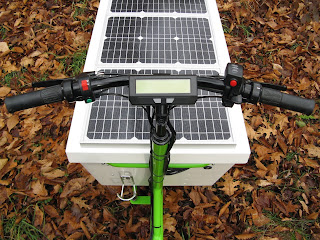 Display panel of Cycle Analyst in center of handlebars

The bike also has a data logger with GPS tracking, but that data is for more in depth analysis.  I'll write about the Cycle Analyst and the Analogger in a future post, and for now I'll just stick with the general trends.

There were 14 trips (totaling 198.8 miles) taken in September and October that had good measurements.
-The average energy use was 13.2 Watt hours per mile.  Using the EPA conversion factor of 33.7 kWh per gallon of gas, this is equal to 2553 miles per gallon.
-The plug in charger is 85% efficient, which raises the energy use to 15.55 Wh per mile.  This converts to 2167 mpg.
-Using the GMP residential electricity rate of 14.959 cents per kWh, the 15.55 Wh per mile costs $0.00232, or about a quarter of a cent per mile.
-The usual traveling speed is 16 to 19 mph, and the average speed (all readings from whenever the wheels are turning) is 14.8 mph.
-The top speed using only motor power is 20 mph on a flat level road.
-The maximum speed was 40.9 mph going downhill. 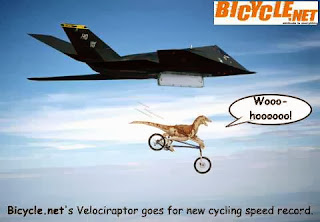 The above numbers show that a bicycle really is a very efficient vehicle, even with a big cargo box on the front carrying a load.  This makes it a good fit for using solar energy for at least some of it's power, and suggests adding more solar panels.  It also points out the benefits of working to make it a good car substitute.
Posted by Karl K at 1:12 PM