Bike builders often use a heavy metal table with custom spacers bolted on to it to hold tubing in alignment while they work, or a jig made of angle iron or extruded aluminum sections that are adjusted to fit the frame design.  If I was making more than one bike I'd build a jig to hold the frame in alignment during cutting and tack welding.  But since I'm building one off experimental bike designs, the methods that I'm using have more to do with custom cabinetry.  The design is drawn full scale and pieces are then scribed and cut to fit the pattern, using strings, templates, and other measurements taken along the way to keep the project straight and lined up. 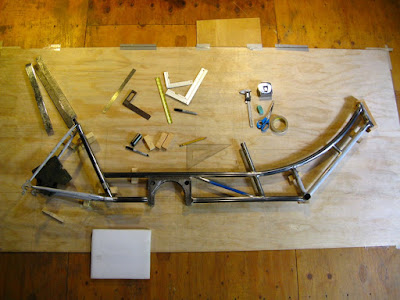 To start the Oma cargo bike I found the flattest part of the floor I could, and taped a sheet of thin underlayment plywood (smooth on one side for drawing lines) to the floor to keep it from shifting around on the different bumps.  (I might build a low, flat, and level table if I keep doing this.)   Plywood has decently parallel edges for hooking measuring tapes and squares over, allows me to erase lines when I make mistakes, and lets me glue spacer blocks on it to position the tubes in the right locations.  Plywood does move with the weather just like wood and the corners do swell out of parallel, but over the years I've learned habits that allow me to easily work to 1/32" tolerances (which is 0.031"), and with minimal effort I can work to 1/64" (0.015") and can push it to less than half that when needed, so wood patterns are OK for a project like this.

For this bike I had an overall style in mind (the Adelaide Longbike) and I knew the dimensions of my components, so I started at the head tube and laid out the rest of the bike moving towards the back.  Making this frame was actually a lot like lofting for shipbuilding- while I didn't use a spline for drawing the upper tube curvature, I did use a beam compass, and then used triangles, squares, and blocks to build the frame over the drawing.  For example after drawing the top tube high enough to clear the front derailleur and the motor but as low as possible under the cargo box, it was simple to place the tube on the pattern to check the fit while bending and notching it. 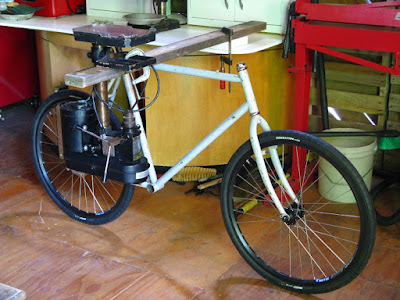 Before cutting anything I propped up the donor frame level with some weight on it and took measurements.  The head angle is good to know because that is what the fork is built for, but the front axle to bottom bracket centerline distance, wheel radius, and the bottom bracket drop and height should be checked too.  This frame was very large, and while the head tube angle was a nice slack 68 degrees, I decided to move the bottom bracket 1.5" closer to the front axle to help shorten up the length of the bike.

My goal is an everyday bike that can easily do many of the functions of a car, but quite a few people have told me that they couldn't use one of my bikes because it was too big for them to store easily.  This bike also turned out too big- the wheelbase is 82 3/4", which while 4" shorter than my bakfiets is 6" longer than my longtail.  An easy way to make this bike at least 12" to 18" shorter would be to move the rear wheel forward and have a hump inside the cargo box (like a Madsen cargo bike), but I decided I wanted my dog to be able to ride in the box so I left the floor flat and about the size of a car front seat.  I also kept the solar panel 6" behind the rider to reduce the butt shadow on it, but if the solar wasn't as important the bike could be shortened another 4" to 5" behind the seat.  The Bike Friday Haul A Day is proof of how popular a smaller cargo bike can be.  Eventually I'd like to build a small run of Scarlet Runner cargo bikes for people around me to use, but for now I'm still learning how to package the components of a work bike tightly.  One thing I have learned is that really good bicycles are about doing many functions with the least amount of bicycle possible. 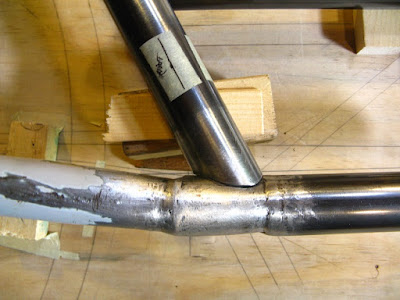 To transition the rear chainstays to the lower tube I made a cone shaped adapter piece.  Before welding it on I welded a diaphragm across the ends of the chainstays to keep them from deforming under load.  The tubing is propped up on the drawing with blocks to the correct height to keep it straight, and then it is easy to use a try square (with one wide leg so that it stands up) to line the tube up with the drawing while fitting joints. 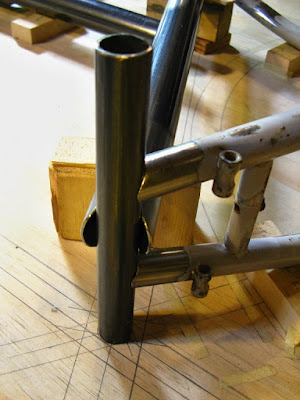 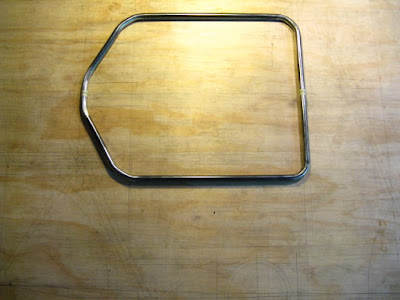 The hoop that supports the rim of the cargo box was made of two pieces welded together.  To form the outline I simply drew lines up from the drawing of the frame at the bottom of the plywood (click on the picture to enlarge if you can't see the drawing), and then drew in the sides the same width as the solar panel that forms the lid.  I then placed the tubing over the outline as I bent it to check the shape. 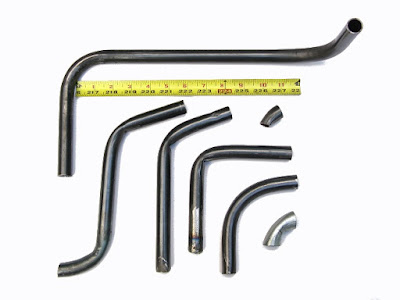 Bending small radius curves without heating the tubing has been a problem.  I have a tubing roller that works very well on large radius curves (such as the top tube on this bike), but while it's possible to turn out small curves, it's too difficult.  This picture shows the results of experiments with several different dies, supports, and also techniques like welding end caps on the tube and filling it with sand, etc.  I'm finding that the small radius curves I've made so far are about 2.5" to 2.75" center line radius, which is not a common die size for commercially available tubing benders, and the tooling gets very expensive so quickly that I've started to build my own rotary draw bender instead of buying one. 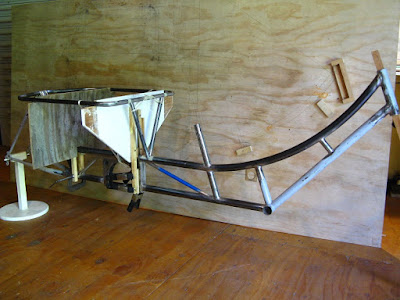 Once the backbone of the frame was finished, it was time to install the hoop.  The two wood supports propping it in place have legs that center them on the frame which kept the hoop very close to being lined up, but I also ran a string from the head tube back over center marks on the hoop to the rear upright and then leveled the hoop and frame too.  With the hoop held in place, I fitted the uprights.  In the background you can see some of the shim blocks glued onto the drawing on the plywood sheet from the earlier steps.

I also decided to try a feet forward seating position on this bike, and the seat tube post is set back about 9" from the bottom bracket.  The goal was to have my feet flat on the ground at a stop.  The basic formula for this is that the distance from the middle of the top of the seat to the ground (i.e. inseam) is the same distance as from the middle of the top of the seat to the top of the pedals at full leg extension.  If you draw this out the seat actually has to adjust up and down in an arc, however the middle 6" of seat height adjustment is close to a straight line, which is what I used for setting the seat post location and angle.  I knew that I'd lose some pedaling force by not being over the pedals (unless I stand up), but this might be OK because of the electric motor assistance.  (Since my next bike will be a semirecumbent this is a good intermediate seat position trial.)  I don't have many miles of riding this bike yet, but first impressions are that it's good, but the front fork stem is far away and the steering feels like a tiller.  Since many velomobiles and recumbents have a similar tiller this should not be an issue, but I think that if I built these for others I would move the seat post an inch or two forward closer to the usual position.  When people extend their leg they naturally point their toes, (which is why setting the seat height using a straight leg and your heel held flat on the pedal works- the toe pointing reflex gives the correct bend in the knee at full extension), and this pointing slightly reduces the need for having the seat as low as the theoretical inseam height that I calculated. 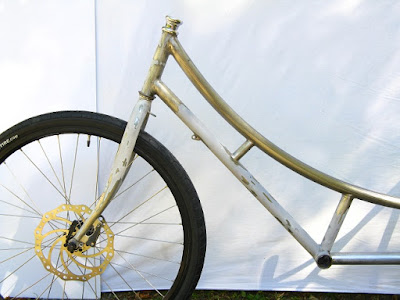 The curved top tube makes it easier for people to get on and off the bike- my impression from comments on the test rides with my other bikes is that at least 1/3 of riders want easy access on their everyday bike. 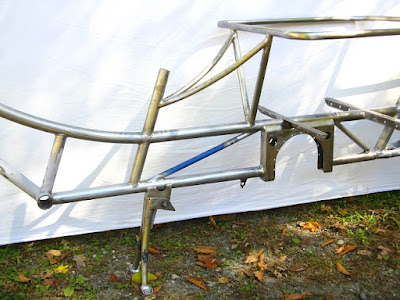 After adding uprights to support the hoop, I put in a few diagonals to help brace the frame.  I curved the diagonal braces that run up to the hoop so that they would clear springs on the back of the seat, they bend inwards as well as down.  The motor mount is a weak spot, although I did include a bash bar that bolts on underneath the motor which will take some of the downwards force that would try to bend the mount open.  The next time I mount a motor like this I will use plates that attach near the axle shaft instead of around the spoke flanges.  I then added some ells to support the cargo box floor. 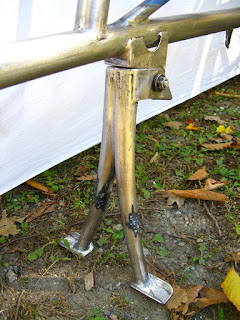 I had an old bent fork that I made into the kickstand, the legs turned out nice but I'm not happy with the pivot (it's too far over center and hard to use), and the chain clearance is minimal.  I plan on redoing the idler sprockets for the front chain, probably by making the front sprocket into a single gear and adding a 3 speed freewheel and derailleur to the motor, which should help the clearance.  But for now the frame was done enough to ride, and it was time to get some paint on it and make the cargo box.