The Transportation Expo in Hanover on November 16 was a lot of fun.  Sustainable Hanover arranged to use the Richard Black Community Center for Saturday morning, and had several electric and hybrid cars out in the parking lot, as well as organizations like Advance Transit, Hanover Bicycle and Pedestrian committee, Upper Valley Trails Alliance, and several bikeshops, in the building.  I thought it was great because I finally got to meet Larry Gilbert of Zoombikes and try out an Evelo ebike.  There was good crowd, and another half dozen people took test rides on the solar electric cargo bike. 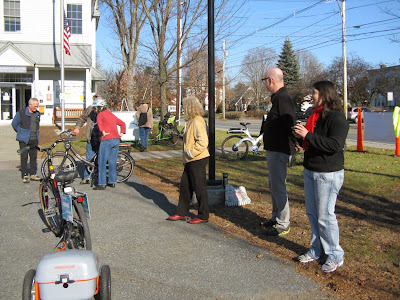 The temperature was a little cool at the start, but quickly warmed up under a clear blue sky, a great day for test bike rides.  Larry had both regular style electric bikes, and a trailer with an electric motor for pushing a bike along.  Hoyt Alverson brought his homemade ebike that had extra towing power, and the solar electric cargo bike held down the utility commuting side of things. 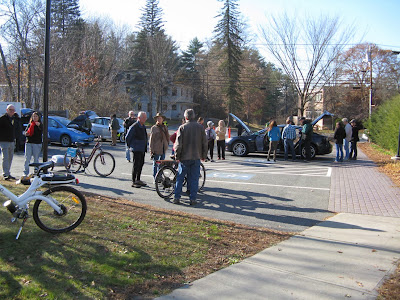 The parking lot had Toyota, Nissan, Ford, Chevy, and two Tesla electric vehicles for people to look at. 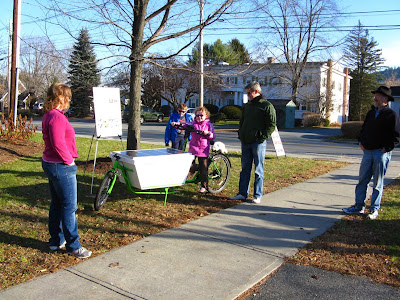 Riders were eagerly waiting for test rides on the solar electric cargo bike. 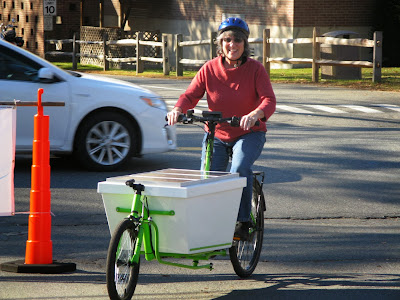 The usual result of a test ride- a big grin. 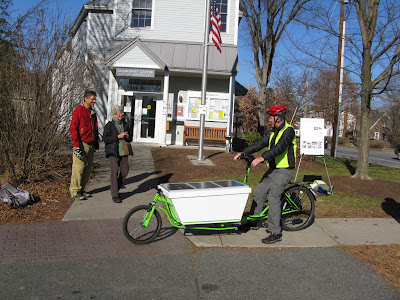 A test rider pausing to talk with friends before a test ride around the block.