At first the low budget route seemed good, reusing something I already had.  But after reading some mileage claims, I decided the bike needed a fair amount of energy to get to WRJ and back, (33 miles with no side trips).  The old car battery might have had maybe 300 watt hours capacity left in it, and besides it was only 12 volts- the motor needed 36 or 48.

A short side note here:
As previously mentioned, Amps is like the water flowing through a pipe, and Volts is the pressure (zing) pushing the water.  The two have to be combined to get the total amount of power, and this is done by simply multiplying them together to get watts.  If I let 20 amps of electrons flow out of a 12 volt battery, there is 240 watts of power flowing.  If the battery produces that flow for an hour, (this changes the flow into a fixed quantity), the amount of energy produced is 240 watt hours.  The more the volts, the more the amps, and the longer the time the battery lasts, the more capacity it has.

The nice battery pack in an aluminum case under a bike luggage rack that I mentioned while talking about range is probably 36 volts x 9 amp hours, or 324 watt hours.  I wanted more.

Lead acid batteries (like my old car one) have a few problems.  They are heavy (like lead), spill sulfuric acid, and don't like being drained below half full (they die).  Golf carts use deep discharge cycle versions because they are cheaper than other batteries, and it is ok to carry around 250 pounds of batteries under their seat.  A sealed lead acid battery prevents spilling acid, but still dies if discharged too much.   The consensus on most forums about lead acids was that they last only one year, because no one stops themselves from draining it all the way to empty.   At a Lead acid battery a year, a lithium battery that lasted 3 years would actually be cheaper, and not have the draining problem.

You will notice that I've jumped over NiCad and NiMh batteries.  NiCads are quite toxic, have a memory, and don't come in big assemblies.  NiMh are better, but why not just go to Lithiums?

Most Lithium battery charts look like this (right click on chart and open in new tab to get a larger version): 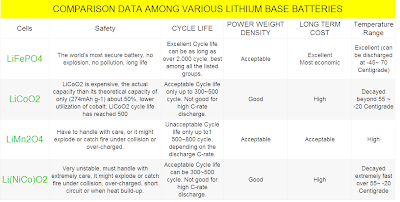 (Similar versions of this chart are used by several Chinese battery and ebike motor manufacturers.) 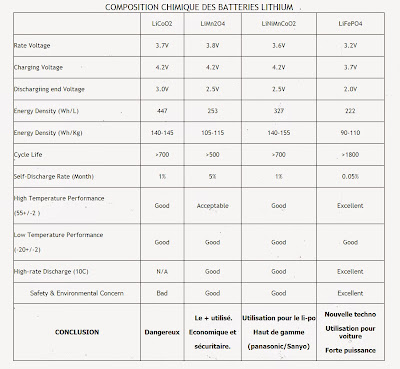 (Chart by a Sun Trip commentator, who was traveling on an electric bike from Shanghai to Lille, France.)

In addition to LiFePO4 being an obvious good choice, it is also available in Prismatic Pouch cell format: 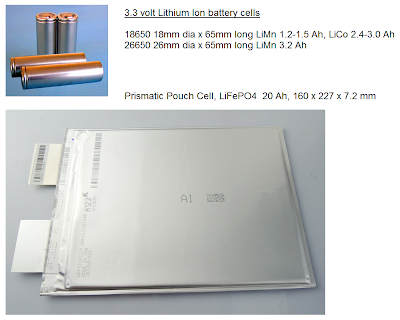 (Top photo by Cedax, bottom photo by Cycling-2013, cells are about the same scale.)

While a cylindrical cell allows air to flow through a stack for cooling, (good for preventing Priuses from catching on fire), the LiFePO4 chemistry doesn't really need it.  The Prismatic Pouch cell takes less space on a bike, and is lighter.  In addition, they are actually connected to the US, as A123 is from Massachusetts, (although the cells in my battery probably came from a plant in Korea).  A further feature is that LiFePO4 is similar to the naturally occurring mineral Olivine, and is relatively low toxicity.

The Prismatic Pouch cell comes in a 20 Amp hour size, and assembling them in series with a battery cell monitoring circuit for a nominal 36 volt battery gives 720 watt hours of capacity. 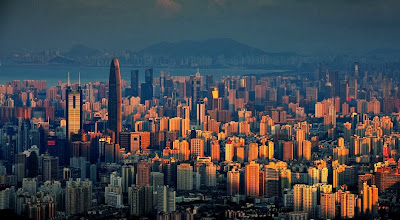 The cells were assembled into a battery in Shenzhen, China (photo credit Concrete Jungle) 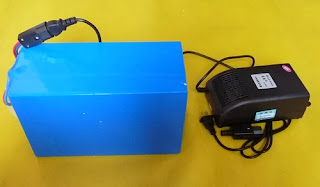 The battery has foil faced foam board sides held together by blue heat shrink tubing.  This is a step up from the cardboard and duct tape wrapping that many cylindrical cell battery manufacturers use.  It has worked very well for about 450 miles this summer and fall, and the only bad comment is that the charger was squashed during shipping, and I had to pay $25 more and wait 4 weeks for a replacement before I could charge and use the battery.