Yesterday I had the honor of giving a presentation about the Solar Electric Cargo Bike to the Transportation committee of my Regional Planning Commission.  I summarized the main points of the bike, which are written about in more depth in this blog, so I won't repeat the presentation here. 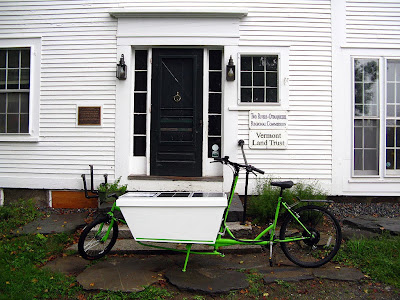 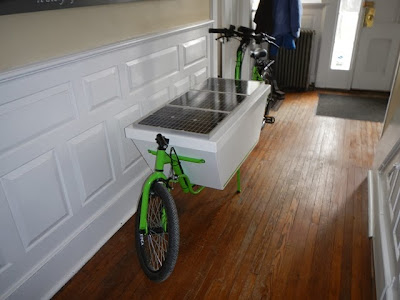 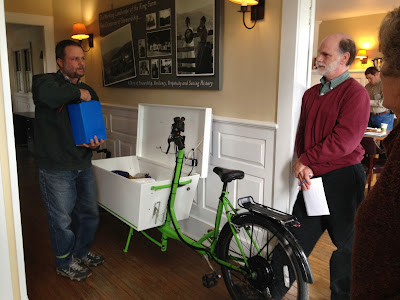 The other speaker was Gina Campoli, of the Vermont Agency of Transportation, giving far too short of a talk about Electric Vehicles in the state.  She highlighted the state's current population of cars, (5 of the top 7 most popular new cars are pickup trucks), and what this means for our state's Green House Gas emissions and fuel use.  The rural character of our state also puts us up close to the lead in Vehicle Miles Driven per capita.  There were 7.141 billion miles driven in Vermont in 2011, or 11,400 per capita, which is 20% above the national average.  People may have a very efficient house, but then because of our rural nature, have to drive out from it on average 7 times a day.  One of four methods of dealing with this is by switching to Electric Vehicles, (the others are improved vehicles, reducing vehicle miles traveled, and improving vehicle system operations).  Buses would come under reducing VMT, but unfortunately a housing density of at least 5 units per acre is needed to support bus service at 5 to 15 minute intervals.

One problem appearing is that as Vermonters use less fossil fuel, the gas tax funds for maintaining the roads will shrink.  Another loss of funds is the national trend that registrations have started to decline, particularly among young people.  At the VT Toxics Action conference last week, a young woman told me that she and her husband live in Boston and use their bikes for all transportation other than long distance, for which they regretfully own a car.  Also, I noticed that when I gave my talk about the bike that several young people from the Regional Planning Commission dropped in to listen.

The RPC is only 9 miles away from my house, but the route goes over a mountain with about 700 feet elevation change in a little over a mile.  On the way home I walked up that section, with the bike motor turned on low pushing the bike along for me.  This increased the average power use to 18.2 Watt hours per mile,  and dropped the trip's average mpg to 1850, and average speed to 11.9 mph.  It made me wonder if a mid drive motor might be better for Vermont, because the bike motor would have more leverage from being shifted down to the slower gears.  Or do I just need more power? 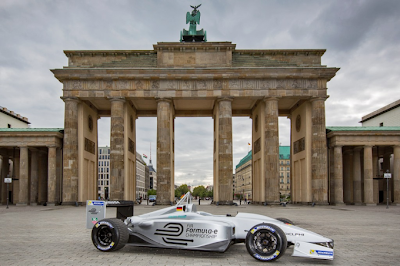 Berlin will be the site of one of the 2014 Formula E races ( http://www.formulaeracing.com/ ), along with Los Angeles and Miami.  Judging from the YouTube videos, Formula E cars do make noise, mostly from the gears and smoking tires.  Perhaps they will use some of Berlin's 220 public charging stations for the pit stops, with the race cars waiting in line with the city's electric police patrol cars?