Yesterday I took the third bike to the annual Vermont Energy and Climate Action Network (VECAN) conference.  It is not finished yet (I have to do all of the wiring still), but I didn't want to wait another year until the 2017 conference so off it went.  Since 275 people have now seen it at the conference I thought it should be introduced on the blog, and then I'll write more about the details as I finish building it.  Because I've built 3 bikes and have ideas for 3 more (plus I've been asked to build a bicycle bean thresher), I've decided to introduce Scarlet Runner Bicycles as a name for this series of bikes. 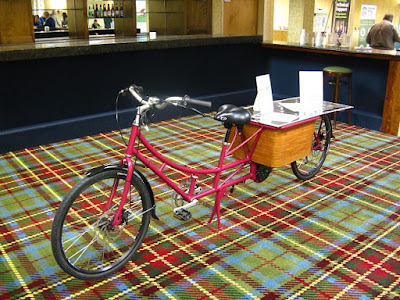 VECAN is a network of town energy committees from about half of the towns in Vermont.  This year's conference was "Local Leadership, Local Action: Partnering to Get to 90% by 2050", which is acceptable because it is our state's energy goal, but I'd really prefer Sierra Club's "Ready for 100%" renewable energy goal.  The local leadership is necessary because our federal government is such a mess.  The keynote speaker this year was Søren Hermansen, Director of the Samsø Energy Academy in Samsø, Denmark, an island that is generating all it's electricity with renewable energy sources and now exporting power back to the mainland. 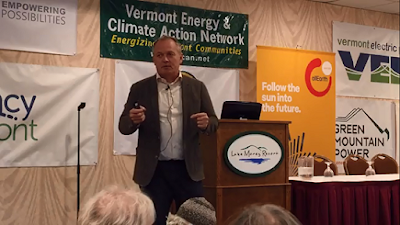 If you would like to watch Søren's presentation, Bob ("Bob the Green Guy") has filmed and posted it at http://bobthegreenguy.com/vecan-2016/keynote-address/soren-hermansen/   Søren's talk starts at 30:30 and ends at 1:33:42.  It's a good talk about community building, which is sorely needed right now. 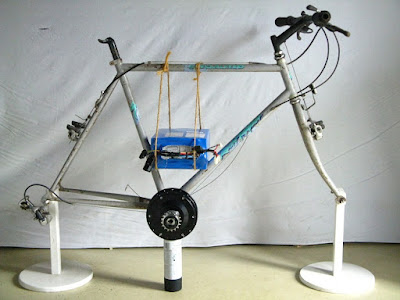 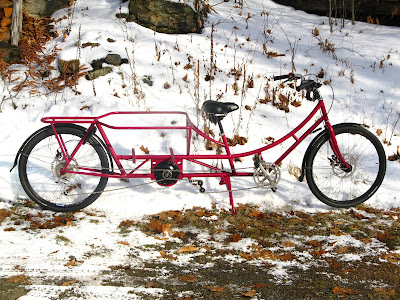 After
As you can see I kept the rear chain stays, seat stays, bottom bracket, head tube and front fork, but I added a little bit in between.  This bike was inspired by the Longbikes built in Adelaide, Australia in 1987 by the Musgrave Community Bicycle Works. 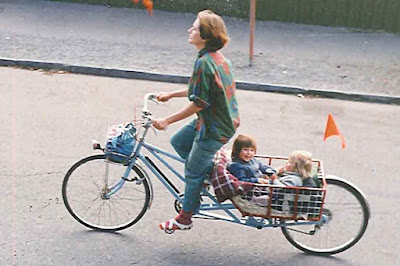 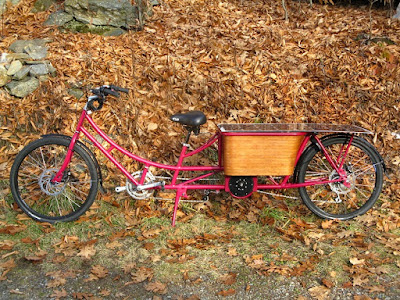 I based the mid cargo box layout on a Dutch Oma (Grandmother) style frame for easier getting on and off, and then I moved the seat back and down into a cruiser style position for both comfort and having feet flat on the ground at a stop.  (click on pictures to enlarge them) 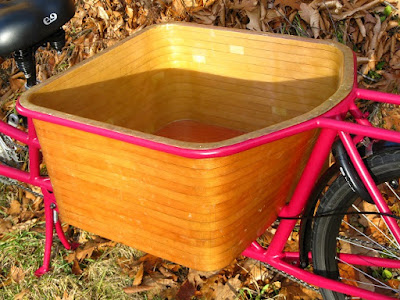 The box is thin cherry veneer with fiberglass cloth and resin wrapped around both the outside and the inside.  I almost tried canvas instead, but this turned out fairly light weight.  The length and width are the size of a car front seat, and a child seat will fit inside.  The paint is magenta acrylic latex enamel house paint, and I've finally figured out how to get a good coat applied- two people asked me at the conference if I had sent the frame out to be powder coated. 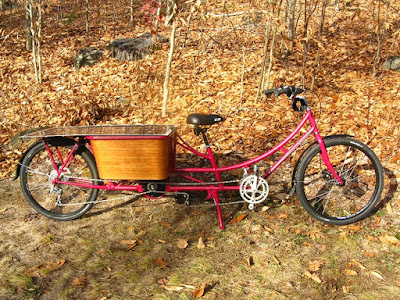 I moved the motor from the rear wheel to the frame for two reasons, the first is shifting down for climbing very steep hills (20% to 22% grade), and the second is to make fixing flat tires easier.  I converted a geared hub motor from spinning the outside case (out runner) to spinning the shaft (in runner), which gave me an internal freewheel inside the motor and an external one on the shaft, so that the motor and pedals can work independently. 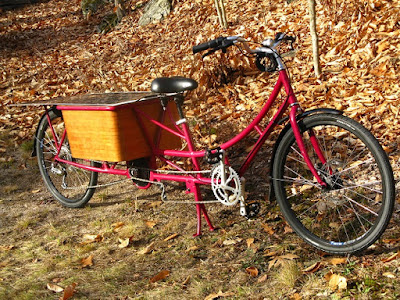 There are many things to be finished up yet on the bike, but I've been able to take short rides and it seems good.  It takes forever to turn because it's so long, (it's shorter than the bakfiets but longer than the longtail), but I'll save that discussion for another post. 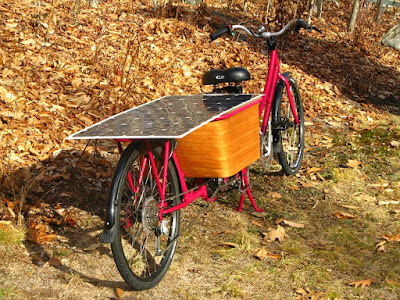