I rode down to the Thanksgiving day community supper yesterday (5.5 miles each way), because I wanted to ride a bit while thinking about the design of the second bike.  I rode a regular bike so the solar electric cargo bike wouldn't get dirty (the roads have been sanded and salted).  It was a little cool- the daily average temperature was 23 F.  In addition the daily average wind speed was 11 mph, gusting to 41.  However I was very comfortable, with a polar fleece hat under my helmet, neck warmer, and work coveralls on.  (I suppose if I was more fashion conscious I might have worn ski clothes.)  The only discomfort was on the way home, as I ate too much, and did not feel like pedaling up the hills, an electric motor would have been really nice.  I noticed two things on the ride- that traction was pretty much normal, and that the regular bike (even with knobby tires) was slightly easier to pedal than the solar bike (with the motor turned off).  I'm not sure why it was easier, some reasons might be:
-the slip clutch in the electric motor is dragging slightly (with a medium push, the motorized rear wheel spins about 2 turns, and the regular bike with a freewheel spins about 10 turns)
-the cargo bike's weight might make more of a difference than I thought
-the frozen dirt roads were noticeably easier to pedal on than the softer, thawed, sunlit sections that would be more similar to previous cargo bike riding

It does point out the quantity of energy that a bicycle uses is on the small end of the scale, and small changes can make a difference. 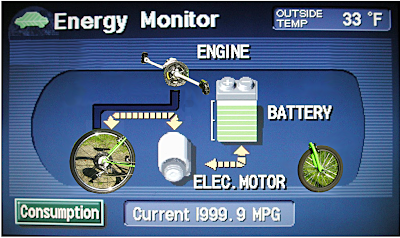 The mpg should be more like 2500, must be going up a hill.
(My apologies to Prius owners for this display simulation.)

Regenerative braking (regen) on a bicycle looks like it will be a grey area that might get lost in smallness, and the only way to find out for sure will be measuring energy use next summer on the second bike with the direct drive motor.  (The first solar electric bike has a gear drive motor with a slip clutch, and cannot do regen.  Mid drive bikes also have slip clutches.  See my blog post about The motor for more info.)  Some considerations for now are:

To put things in overall perspective, the simple kinetic energy equation:  Energy = half of mass times velocity squared, (E=0.5mv2), can be used to compare a bike and a car.
Using data from last summer:
-the bike's average speed was about 15 mph, and an average bike and rider might weigh 200 pounds.  Stopping to 0 mph would yield 1.13 Watt hours (before system losses)
-My car's average speed was about 26 mph, and I'm estimating the weight at 3000 pounds.  Stopping to 0 would yield 51.1 Wh (before system losses)
(I used average speeds instead of traveling speeds to be more representative of all situations.)
Stopping the car yields 45 times as much energy.  The question becomes, "Does the small amount of energy from bicycle regen matter, compared to other energy flows of the bike?

To start, I'm going to refer to "Is Regenerative Braking Useful on an Electric Bicycle?" by Brent Bolton of EcoSpeed LLC:
http://www.ecospeed.com/regenbraking.pdf
He covers many issues that make bike regen questionable, such as:
-The large number of stops needed to get 10% more range
-System losses (averages might be: generation about -5%, charging the battery -10%, discharging -10%, giving a -25% total loss)
-A battery has a maximum rate for accepting energy, and must discard more than that (for example going down a very steep hill)

I can add four more factors to Brent's list:
-From my house to the center is an 800 ft drop in elevation.  If I charge the battery before leaving home, it can't accept any of the drop as regen energy on the way down, but will still use the usual amount coming back
-Much of a bike's energy load is air resistance, which is not recoverable
-Terrain will affect regen, because long, medium descents will yield the greatest regen, full stops that are more common to flat areas are not as effective, and steep descents that dump energy will actually cause a loss.
-Since the cost of a bike's electricity is so small, perhaps the cost of regen capability is better spent on a larger battery

Parasitic motor drag is a special situation.  Regen on bikes is done by electrically switching the permanent magnet motor to run as a generator.  The motor has to be directly connected to the wheel, if there is a one way slip clutch to allow coasting, the wheel can not drive the motor for regen.  The problem is that the magnets are attracted to the steel motor poles, and without power applied they resist moving from one pole to the next.  If you have ever turned a stepper motor (such as on a computer printer paper carriage), you've felt the cogging as the magnets moved from pole to pole.  This drag on a direct drive ebike, when the power is turned off, feels like riding with a soft tire.  In a car this doesn't matter, as the baseline drag loads are large enough that a motor has to be powering the car all the time (except during braking).   However bikes spend a lot of time coasting with no motor on, they have a state in between the motor being on, and motor regen, that helps make them very efficient.  An ebike direct drive motor can be turned on slightly to give the illusion of coasting, but does the regen energy make up for this loss?

In Vermont most roads run along valley floors, with a long steep climb and then a long descent to get from one valley road to the next.  I would love to have regen instead of having to hold the brakes during the descents, would this make regen viable?  Would local urban use in WRJ be different?  Since there are so many variables, the easy answer will be simply comparing the Watt hours per mile of the second bike that has the direct drive motor with regen next summer, versus the Wh/m of the Bakfiets without regen from last summer.  An even closer comparison will also be possible using data from the Cycle Analyst data logger on trip sections.