Inside the cargo box

The cargo box was designed to fit 3 five gallon buckets, for carrying compost around to community gardens. At first the lid simply fitted over the box using rabbets cut into the lid frame to hold it on, so that I could completely remove it for large loads, or for a person or dog sitting in the box.  But it was awkward opening the box and setting the lid down while holding groceries, so I added some hinges: 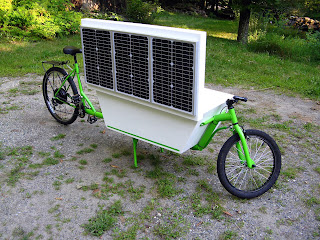 This meant my dog could no longer ride unless I unscrewed the hinges, but it has turned out that I wanted the lid for most trips anyhow, for both PV power and load protection (from the wind at 35 mph, and occasional rain). 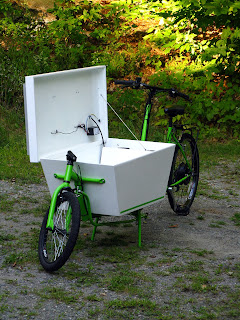 The only time the load has gotten wet was once when I didn't screw my water bottle lid on tight and put it inside the box.  Then I found out how watertight the box is. 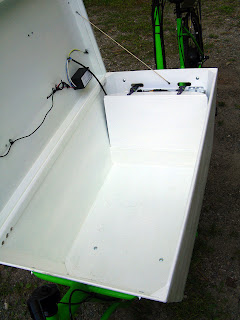 The box is mostly cargo space.  The original design had the battery outside, but it ended up inside with all the electrical devices for weather protection, and an inside cover to restrain the battery and protect everything from getting trashed by the load on rough roads: 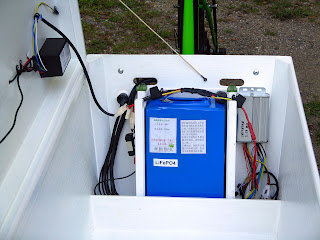 On the lid at left is the controller for the solar panels, and the left back wall has an ignition key and a dc to dc converter for the lights (both hard to see in this photo), the blue battery is in the center, and the motor controller is on the right.  It's good to have the controller mounted in a protected open area, as it does get warm and needs air circulation around it, however I've also seen two controllers that were mounted outside which short circuited when rain got inside them.

The slots in the back wall are for seatbelt loops for use with a child seat.

If I were to build this bike again, one of the changes would be shortening the box by 7 to 8 inches, so that it would fit just the battery and two buckets.  It has been more than large enough for carrying groceries and recycling.  Another change would be to use a monocrystalline cell frameless and glassless solar panel as the lid.  The two modifications together should lighten the bike by 20 pounds, (although also be a lot more expensive).
Posted by Karl K at 2:00 PM