The Breeze, the Stratus frame (S1E2)

I'm only moderately familiar with recumbent design, and my first step was to figure out what the Stratus was supposed to be like originally, before years of different owners had worked on it.  I didn't find any original documentation from 1985, but there was a 1992 review in the Recumbent Cyclist News archives (https://rcnpdf.com/ , Vol 6 No 12).   Amazingly my bike was pretty much whole, with the original Shimano 600 group set.  I was going to have to change some of that out because I didn't think a 35 year old freewheel would be reliable enough for my use, but I'd be changing the front chainring anyway with the addition of a motor.  There was also no way I'd use the shifter and brake on the joystick. But overall the frame was straight, and mainly needed a new coat of paint.  It had a sticker on it from Dana Point Cycle and Sport, and I imagined the original owner cruising up and down the California beach front listening to "Hey now, Hey now, Don't Dream it's Over". 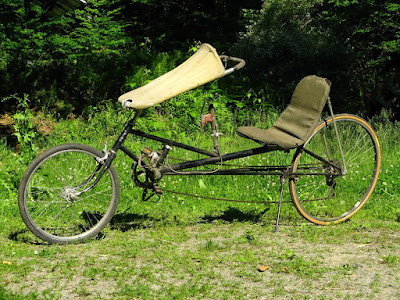 The RANS Stratus A as received
Out of the many bikes with a lower seat height, I was lucky to receive this Stratus.  This model and the Easy Racer Tour Easy (https://easyracers.com/toureasy.html) appear to be 2 classic bikes that are so popular that one blog writer claimed they are the bikes that have crossed the US the most times.  It's a very good place to start from. 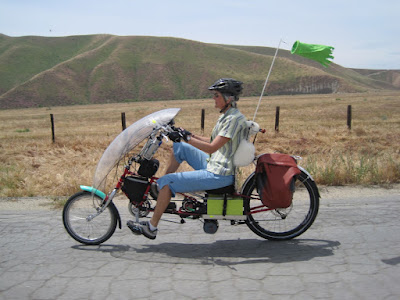 An Easy Racer Tour Easy with an early electric motor drive kit added under the seat.
Photo credit: I don't know the original source, I found this photo on recumbentbike.com back in 2014, and that site now appears to be dead.  I've seen this picture on a few other sites since then.
The Stratus has a bottom bracket height of 14 inches off the ground and a seat height of 21 inches, while the Tour Easy has a slightly more upright position at 13" BB and 22" seat.  I had been planning on a seat height of 18" for The Breeze frame to match many household chairs I have and also the seat height in my old Saab 900, but I found while riding the Stratus I liked a 1" pad, which gave me a 22" seat height that matches the Tour Easy.  However the Stratus BB height is better at 14", as the heel of my shoe was often less than an inch from the ground. 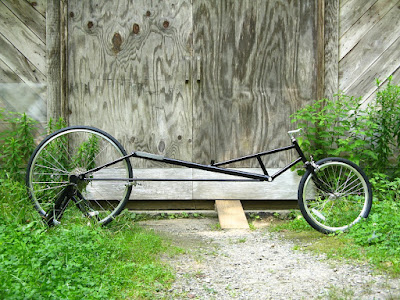 The frame after welding the rear dropout and painting, with the new wheels
(It's mounted in an old exercise stand to prop it up.)
Evaluating the frame design while cleaning it up was lot of fun!  There were a few things I wouldn't have done, such as the plastic cap closure for the seat tube, and the termination of the stays on the rear dropouts (which I'll say more about in the drivetrain post).  Also I was wondering how the BB to seat to rear dropout triangle would handle the torque of a motor.  Otherwise the frame was thought provoking! 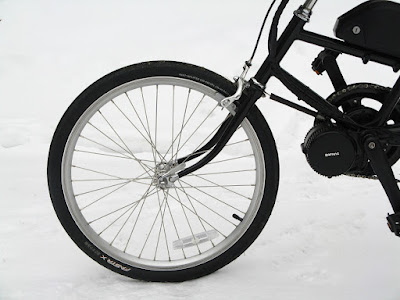 A 59 degree head angle with a centering spring added to counteract flop
The 59 degree head angle confirmed something I've learned since I wrote my blog posts about steering geometry back in 2014- the basic function of the head angle is to put the handlebars comfortably within the reach of the rider, and handling is secondary.  Here's an example that demonstrates the important aspect is trail, not head angle: Tony Foale rides his modified BMW with a 15 degree rake (motorcycle terminology, or 75 degree head angle in bicycle terminology).  Tony modified his motorcyle for testing with rake angles of 15 and 0 degrees, which under some conditions performed better than the stock 27 degree angle which could oscillate.
Credit: Motorcycle Chassis Design: the theory and practice, Tony Foale and Vic Willoughby, 1984, Osprey Publishing Ltd, page 62
The Stratus head bearings were notchy, and I found a current version that looked the same but now had seals!  The front wheel wasn't original, it had nuts and 90 mm Over Locknut Dimension (OLD) while the fork had 100 mm spacing.  I dug out an old Shimano 100 mm quick release front hub that looked period correct and built a new wheel using an aero shape rim.  A major side effect of the 59 degree head angle is a tremendous amount of annoying wheel flop, and after a couple of weeks of having the front fork turn sideways whenever I let go of the handlebars, I made a centering spring.  It's just 4 inches cut off of an old spring for a wood screen door (the kind that always slammed shut with a bang), and is attached to the fork with a little ell bracket on the brake caliper bolt, and onto the frame by hooking it on to a hose clamp.  I still have to figure out a front fender though, because RANS cut it a little too tight with less than 1/8 inch between the tire and the fork crown.
While I did remove the central joystick, I wanted to keep the front fairing + storage cubby.  I added bar extensions to the hoop handlebars instead of the usual update of  "ape hanger" bars.  This bike is steered by leaning, not by turning the handlebars, and it took me a while to learn to steer with my seat.  I had to not lean on the backrest for about 20 miles before it started to become more natural.  There's a small amount of tiller effect during slow, sharp corners, but at speed it's not noticeable at all.  The handlebars aren't very solid and mostly just a place to put your hands, but the fairing does block the wind, and the cubby is really handy! 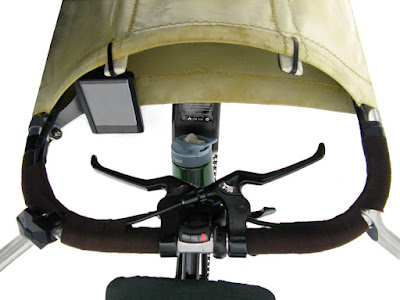 The cockpit with a pair of Dia-Compe SS-4 two finger brake levers and a Shimano Mega9 shifter sandwiched in between them.  The BBS02 keypad is on the left handlebar extenion, and it's LCD display is on a custom bracket that mounts to the fairing in front of it.  (The handlebar extensions are cut off in this photo.)  All cables and wires fit under the bar tape for a comfortable grip, although it is a pretty close fit.   The brake switches are the inline cable type and hidden inside the fairing.
I've adjusted the hoop so that my knees have just an inch of clearance to the underside, and realized that while a fixed solar panel could be mounted over my knees on a bike frame that has steering with a remote linkage, there wouldn't be much space for a front trunk underneath it.  Also a solar panel over my head would be much taller than I had planned, so the next step is to reconsider the seat height again.
The rear wheel is also new.  I had planned on upgrading the antique freewheel hub to a freehub to better handle the motor torque, but I found a complete wheel that I was able to modify, so I simply replaced the whole thing.  I'll cover this part a bit more in the next post about the drivetrain.
The seat cover had shrunk and I had to make a new one.  Also the original kickstand simply spun around on the chainstay, so I took a standard Greenfield kickstand and lengthened it by epoxying on a 4 inch piece of a salvaged seat stay that I had hammered into a profile that slipped on the leg nicely.  (This took three tries:  on the first try I hammered too hard and snapped the leg off, the second time I tried using a torch to soften the tube and melted the aluminum kickstand.  The third time I applied a lot more patience.  It's good that these kickstands are common and inexpensive.) 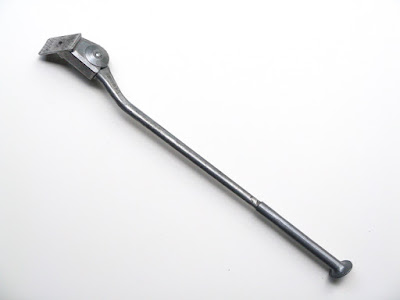 The extended Greenfield kickstand
The chainstays are very slender and could be bent, so I made top and bottom mounting plates out of 1/2" CDX plywood with grooves routered in them that cupped the tubes to spread out the force of the kickstand   Then after mounting the kickstand I scribed the end of the leg to the correct angle and welded on a circular foot.  I had originally planned to combine the kickstand mount with a pair of chain idler pulleys, but the pulleys weren't necessary.  I'll write more about this in the drivetrain post. 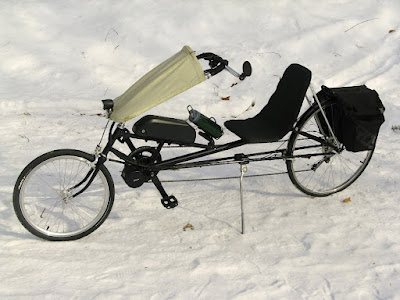 The almost finished Stratus project, (it still needs a front fender and another layer of foam on the seat)
I finished the bike in September and rode it for a couple hundred miles before snow started and then I parked it to keep the road salt off of it.  It's very fast- easily able to keep up with cars in 25 mph zones, and under most situations it's very comfortable.  It's definitely in it's element on a paved road, but it's been fine on all the dirt roads here except for the worst ones where the town has dumped a lot of 3 inch stone.  For The Breeze I'll probably go one size wider in tire width, from 1 1/4" (32 mm) to 1 1/2" because of the stone, but I don't wish to go wider because I also need to cover distance quickly.  I've found it hard to choose between cruising along on this bike or the more upright posture of my converted Marin eMTB and I split my time half and half between the two.
For the next post I'll take a closer look at the drivetrain.