There was a good chance that solar panels might not work on a bike, because of shading from trees and being in valleys.  My first estimate was that the panels might produce 1/5 to 1/6 of the power needed if everything went right, enough to extend the range of the bike, but not enough to run on.  It has turned out that it all depends....  (mostly on shading), and actual performance will most likely be a bit better. 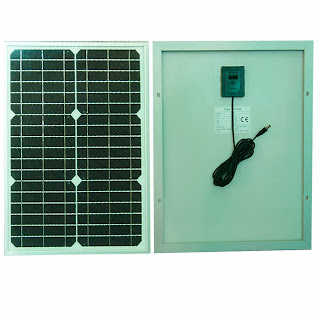 Top and Bottom views of the solar panel

The lithium battery has a specific charging profile, so to make it easier to modify if it wasn't working right I chose the simplest and cheapest route, wiring the panels in series.  The available area for this bike's design was limited to the top of the cargo box.

The end result was 3 generic 14" x 18.5" Chinese panels that cost $49 each, that were built with Bosch monocrystalline cells that have 17.5% efficiency.  They are 20 watts each, for a total of 60 watts output at 36V.  After deducting for losses in the panels using these average output factors:
-98% PV module rating discrepancies
-95% soiling
-97% summer heating
-98% DC wiring
-99.5% diodes and wiring
The panels might be expected to put out 52.8 watts in full sunlight

To verify the solar panel contribution, I need to wire a shunt into the panel output and connect it to the data logger, this is ongoing. I will write more about this in a future post about the Cycle Analyst and data collection.

There are several improvements that could be had by going to a 48V system on the next bike, but it appears that costs will also at least double due to a more sophisticated system.  When the design is worked out I will put up another post.

Likewise, some significant benefits could be had by going to frameless and glassless mobile application solar panels, (estimated 18 pounds of weight savings), but they would cost about 4 times as much.  The market is changing, so this may work out to be a near term option for the second bike. 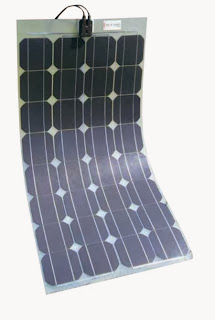 The long term (14 trips) average energy usage of the motor (any time the wheels are turning), is 195.36 watts.   Using the estimate of 52.8 watts for panel output, the motor to generation watts is about a 4:1 ratio.  Again, until the shunt is installed on the panels, and some time is spent analyzing the results, I won't have a shading factor for Vermont roads.  It can be estimated simply by looking down a road and seeing how much of the pavement has a shadow on it, but this is not as accurate as long term measurements would be.  For now I am using the simple equation that if you ride for half an hour, then park in the sun at your destination for 2 hours, (4 times as long), it will charge the battery back up.