Bicycle frames have evolved over 200 years, and there isn't much I'm going to do in my workshop to improve them.  A thin wall steel tube frame is probably the best choice for a cargo bike anyhow, as it won't fracture or splinter like carbon or wood when the bike gets dropped down some stairs, and is more easily repairable or modified than aluminum.  (I've seen projects that I've built a year or two after they were finished, and sometimes I've wondered "How on earth did this happen???")  Steel can take some abuse, which is good for a working bike that is carrying someone at 20 mph with no routine maintenance plan.

In general the walls of the bike frames I cut apart were about 1/16" thickness (0.060"), and they had a bead running down the inside of the seam, so they were not Drawn Over Mandrel (DOM).  Many bike frames are made of chrome moly (CrMo) steel, which is stronger than more common carbon steel.  (The tensile/yield properties for CrMo are around 70,000 to 85,000 psi, whereas 1020 is more like 45,000 to 60,000.)  However CrMo is slightly more likely to crack around welds, and isn't as workable.  So I used a good carbon steel and sized the tube slightly larger to make up for the psi.  It's a few ounces heavier, which will be more of a concern several bikes from now. 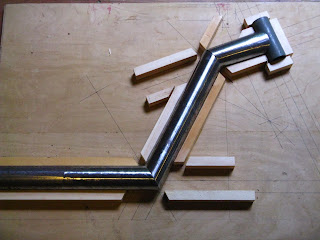 Down tube (behind front wheel), in jig ready for welding

One of the nice things about making a frame is that it can be made to suit the job better.  For example I used a 69 degree angle on the front fork stem, which gives slightly slower steering than most bikes, making the cargo bike more stable.  Also I dropped the crank as far as possible, to make it easier for riders to step through, or to stop and stand at an intersection.

MIG welding was used, which is not as pretty as TIG, but still serviceable.  My opinion here (Warning!) is that since abrupt changes in section create stress risers, the many ridges going across a TIG weld aren't as good as a smoother MIG weld, and the reason why either works is because the root section is so thick the stress risers don't matter.

I'm off grid, and the welding was solar powered. 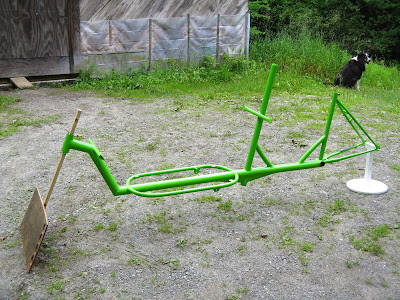 The finished frame getting a coat of paint.

The frame, box, and lid were built concurrently, to make sure they fit together.  Porsche has been using water based paints on it's cars for several years now, so I wanted to try something other than the usual automotive spray cans.  Latex generally is too soft, so I tried to find some water based polyurethane at first, but it doesn't seem to be available anymore.  The final choice was a high gloss brush on exterior acrylic latex.  It works well, with some caveats:
-A good primer coat is needed or the steel will rust and turn the paint brown.
-Good prep work is needed for a good primer coat.
-It takes at least two months to dry.  The frame can be worked on the next day if you treat it very, very carefully, but it won't be hard.
-As it dries the brush strokes flatten out, and well brushed sections can turn out like automotive paint.
I'm planning on continuing to use paint like this, and improve the application technique.  A further experiment will be a clear topcoat, but that will require scheduling so that the first coat can dry thoroughly.