I've just been asked about the FlyKly again, (I think their search engine optimization people are working overtime), and thought a post about it might be appropriate. 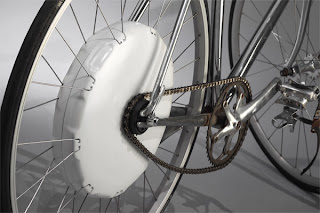 The FlyKly is a rear wheel replacement that has the batteries and motor built inside the hub, making it very easy to install- you simply replace your bike's old rear wheel with it.  There is no wiring or connections.  When you brake going down a hill it charges the batteries, and as you pedal going up a hill it automatically  turns the motor on.  Easy installation, easy riding.

It is very similar to MIT's Copenhagen wheel, which should have been on the market by now because they had a couple year lead on the FlyKly.  They licensed it to Ducati in Italy.
http://senseable.mit.edu/copenhagenwheel/
Update December 9, 2013- The Copenhagen wheel is available for preorder for $699.  While it appears to have a gear drive motor which will increase it's power up hills, it doesn't have a very big battery pack and will probably not have the reserves for very many hills.  There would probably be an overheating problem on a long climb anyhow, because larger hub motors, like the one on the cargo bike, can overheat with a larger load, and they are much more open to the air for cooling.  The spokes might also have a long term tension problem, as they are bent in a U which is more likely to move.  The torque arm in the earlier pictures appears to be removed, signifying light duty use.  It is possible to buy a kit with a slightly stronger hub motor with a larger battery mounted under a rear rack on eBay for less money.  Most of the FlyKly comments below will apply. The preorder website with more information is:
https://www.superpedestrian.com/

The devil can be in the details.

The motor fits in one side of the hub limiting it's size, they state it is 250 watts.

My Bakfiets solar electric cargo bike was designed to carry loads, and has a motor running at 500 watts, with 720 watt hours of battery capacity.

I'm going to quote electricbike.com, in a review they did about the Daimler (Mercedes Benz) Smart eBike:
"Smart bike has taken a big step into the electric bike market and "looks" to be trying to hit it out of the park with it's line of new ebikes.  However because they have chosen a 250 watt hub motor, their attempt looks like it will be more like a bunt-dash to first base rather than a home run."
(The whole report is at  http://www.electricbike.com/smart/  )

A further indication that the FlyKly is lighter duty is that they do not have a torque arm on the spindle of the hub, and rely only on the slots of the drop out to keep the axle from spinning.

Having only one speed is not that much of a handicap on an electric bike, I ride the solar electric cargo bike in top gear 98% of the time.  The motor does has to be functioning to make this possible, which means the batteries have to be charged.  A good analysis of the amount of energy available from regenerative braking on a bicycle is at:
http://www.ecospeed.com/regenbraking.pdf
Most riders should expect to get the majority of energy into the FlyKly batteries from plugging it into the wall, and then because the batteries have at most a 200 watt hour capacity, to have a limited to medium range (depending on individual circumstances).

A further complication is that regeneration will only work with a motor that is constantly engaged, there can't be any slip clutches that allow coasting.  The problem with direct drive bike motors is that the permanent magnets are constantly attracted to the steel poles for the windings, and this causes a slight drag when turning the motor, like riding with a soft tire.   If you have ever turned a stepper motor, (commonly used in computer printers, mechanical control systems, and small industrial drives), by hand, you have felt the cogging as the magnets jump from one pole to the next.  The result is that you cannot truly coast with a direct drive motor, when a rider stops pedaling there is a slight drag slowing the bike down.  A compromise is designing the system to have the motor turned on slightly to give the illusion of coasting, but this becomes a tradeoff between range and whatever regeneration might be produced.

I would point out two other limitations:
-Most bikes nowadays are not designed to adjust chain tension, that function being taken over by the derailleur mechanism.  In most cases the FlyKly chain will simply have a large droop and a lot of free play in the pedals, but in the worst case the chain may slip.
-Wifi or Bluetooth communications generally have a range of 300 feet under perfect conditions, and 100 feet or less under real world conditions.  This may affect the security functions of the FlyKly.

With the understanding of these FlyKly limitations I would still say there is a market for it, just don't expect it to haul loads up a hill.  If you are a lightly loaded bicyclist, who has a mainly level route, that is medium distance or less, and needs just a little extra help getting up that hill or two, this might be an easy to use solution for you.
Posted by Karl K at 10:03 AM