There are not very many solar electric cargo bicycles where I live.  As I started to collect information about them the summer of 2012, I asked at bicycle shops between here and Montpelier, talked with other energy committee people who were Electric Vehicle enthusiasts, and asked Transition Town bicyclers.  Entering that winter I had a list of 21 people who wanted to be involved in the project in some manner, with about half of them willing to be test riders for a week or two and write a report on whether they used the bike or their car and why.  From the start there was a lot of interest, and it seemed like many people would be involved.

There was also a definite scarcity of knowledge, so it seemed like these bikes might end up as a public education program, like Solar Hartland had been.

I had also started to collect used bikes early on, and after putting a notice on my town's listserv looking for more parts bikes, ended up with 27 bikes (and several additional people who wanted to be part of the project): 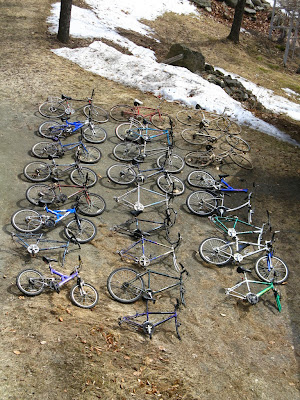 Some of the parts bikes

About the same time, I started to become aware of how expensive this project might be.  Since so many people were involved, I asked for permission to run it as a town energy committee project, and then applied for a $1000 grant to cover the batteries and some of a motor.  The precedent was a pair of Transition Town bicycle blenders that I had been loaning out to various community groups for the previous 5 years.  The grant wasn't approved because they felt there wasn't enough community involvement, which turned out to be true: When I had to care for family members during the summer, Bob and Chad were able to do some of the welding, but without me designing the pieces the project slowed to a crawl.  So I sucked it up and bought both motors, (it is always better to have the parts in hand for measurements when building a frame), and postponed the batteries for a few months. 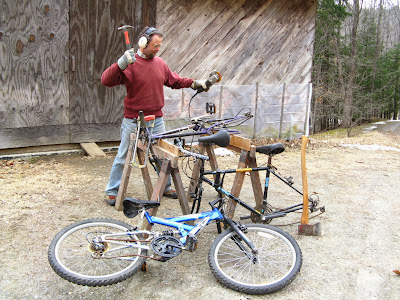 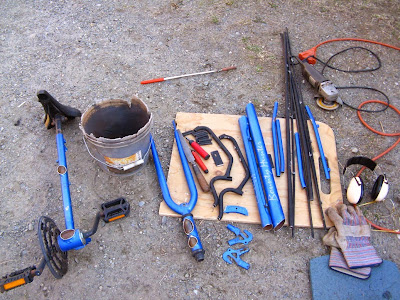 Ever take something apart and think "I'm not putting that back together again"?

Unfortunately the battery was needed sooner than planned to finish up the frame dimensions, resulting in my skipping church donations, etc. for a while.  The motors came from Hong Kong (the company was a delight to deal with), and the battery from Shenzhen (the company might have been ok, but the shipping company squashed the charger and things went downhill from there).  I'll write more about this in upcoming motor and battery posts.

Another item that didn't work out as planned was the parts bikes.  Only about half of the parts were usable, and many shifter or other parts were unique to a manufacturer, so a lot of bikes were needed to get a whole bike. Also only about half the frame tubing could be reused, as many of the cut pieces were a few inches too short.  It is necessary to put together one good bike, and then plan on purchasing new tubing and repair parts as needed to convert it.

One of the bikes had this sticker on it: 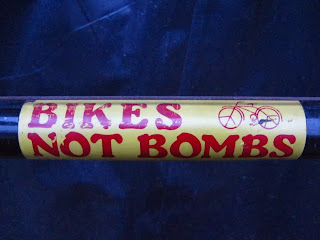 I had heard of them before (a local baker, Kelly, has adapted it to "Bread not Bombs") but wasn't familiar with them, so I looked them up on Wikipedia.  They are in Boston, and have been around since 1984!  https://bikesnotbombs.org/  I can only imagine how many used bikes they must have to go through to produce a shipment.

Eventually the bakfiets was presentable, in time for the Fourth of July (2013) parade.  Other events have included: 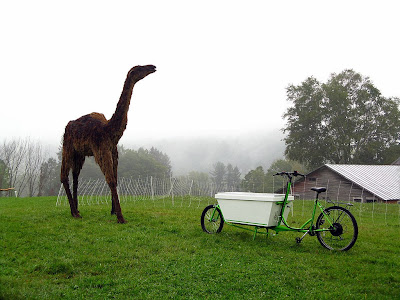 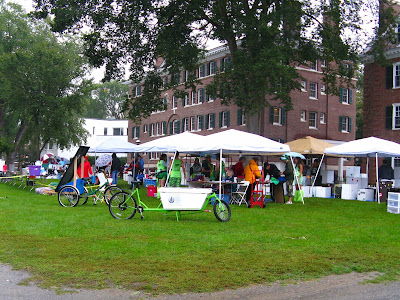 Helping out the Dartmouth Sustainable Group at Move In Day
as part of the Upper Valley Sierra Club.  The student's portable power
solar panel project on a tricycle is visible to the left of the cargo bike. 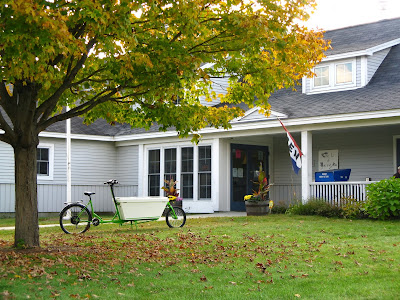 Visiting "The Li of You and Me" community art show at the Library.
(Poster delivered on the cargo box top.) 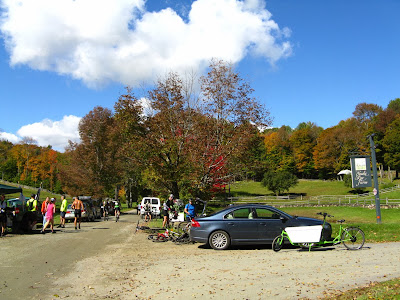 Hanging out watching the bikers and runners at a water stop at the Vermont 50 mile race. 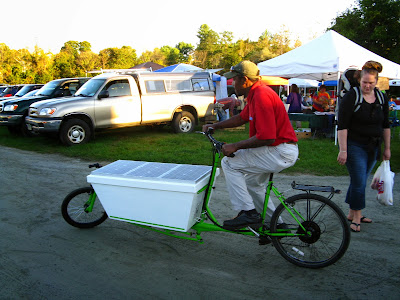 The bakfiets ended up putting on close to 450 miles this summer and fall, about half of which had good records made of the energy usage.  (I'll write more about that in an Energy Flows Budget post.)

There were many fun moments, like walking out of a regular supermarket, throwing the bags of groceries in the box, and riding off with shoppers looking on.   About 50 to 60 people took test rides, and about a dozen times I heard riders say "WOOOOO" from a quarter of a mile away once they figured the bike out.  If they didn't come back with a big grin, I knew they had missed turning on the motor somehow, and repeated the instructions and sent them back out again.

There are other events and conferences still coming up this year, but because of the delayed building schedule the loan trials did not happen.  I'm expecting the longtail will be done next summer, and once the second battery is purchased, the loan trials will take place.