The motor helps make this bike a car substitute.  There are several decisions:
-Front or rear wheel (and since I started this project, mid drives have become more popular)
-Geared or Direct Drive
-Size (300 to 1000 watts)
-Voltage
-Throttle control or Pedelec
-Price vs quality

I'll run through the main considerations:

A lot of bikes have a front wheel motor, as it doesn't involve the freewheel and chain.  However the rear triangle of a bike frame is much more solid than a front fork, and since the cargo bike design included carrying loads, I choose a rear motor.  A secondary factor is that many of my roads are dirt and sometimes steep, and I expected a front wheel motor to be more likely to spin.  (There are bikes with a motor on each wheel for all wheel drive.)  A note: both locations need a torque arm, especially aluminum front forks, unless you have a very small motor that you never turn on full. 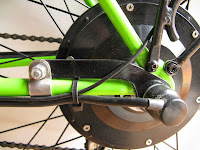 Torque arm (black metal piece from axle to frame) that stops axle from spinning in dropout.

A geared motor has a smaller hub inside it carrying the magnets, which spins much faster than the wheel. Then gears slow down the motor speed to the wheel speed, giving a lot of torque at low speeds. However the gears would make coasting next to impossible, so a one way slip clutch is added.  This allows coasting like a regular bike, but does not allow any regeneration on braking. 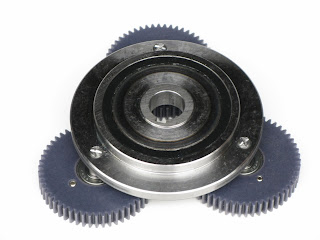 One way slip clutch in center, with 3 planetary gears riding on it.  The motor gear fits in the center of them, and the outer ring gear is on the bicycle wheel inside where the spokes attach.

A direct drive motor has the magnets attached directly to the wheel hub, and has to be a larger diameter (and heavier) to give the magnets enough leverage.  Very simple, with no gears: 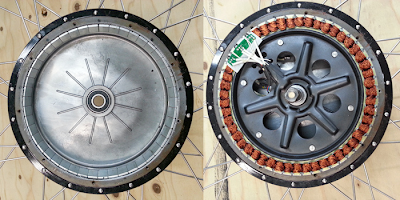 Direct Drive lets the motor function backwards as a generator, and pump electricity back (Regen) into the battery when going down hills. There is not much energy available on a bike from doing this, I'll cover it more in a Regeneration post. Also the magnets are constantly attracted to the coils in the motor, and if the motor is not turned on it is harder to pedal, like riding with a soft tire.

Mid drive motors (connected to the front sprocket near the pedals) have been made mostly by Panasonic for the Far East market, however in the last year Bosch, Contitech, Benchmark, and Yamaha have come out with motors, and there are also several aftermarket kits, like Stoke Monkey. I originally ruled out mid drives because they can be complicated, and they use the standard chain and sprockets to transfer power, which seemed less robust than a hub motor.  However they do have two advantages:
-A very big motor can be squeezed in behind the seat for racers
-A small motor also works, because you shift down for hills

A Pedelec system turns the motor on only when the rider is pedaling, by using pressure sensors on the pedals or sprocket. 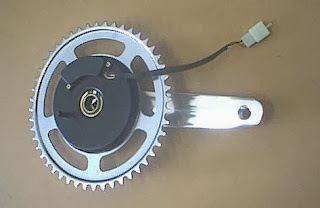 Several European countries require this system.  The solar electric cargo bike uses a hand throttle instead which allows riding without pedaling.  However if done well, (such as Bionex), a Pedelec can be a lot of fun to ride with no constant control needed from the rider.  It is also a natural fit with a mid drive system.   I may have to build a fourth bike to test this out.

Amps are like the water flowing through a pipe, and Volts are like the pressure pushing that water.  On an electric bike you get the same amount of push by turning one down and the other up equally, and in general higher voltage/lower amps is the way to go.  This direction allows thinner wires, which reduces cost and makes the bike lighter, all the way up to the point where the motor burns up because the insulation can't handle the voltage.  Most electric bikes are using 24, 36, or 48 volt battery packs, and I chose a middle of the road 36 V battery for the bakfiets.  It's motor can probably handle over 100 volts, the limit here is set by the controller: 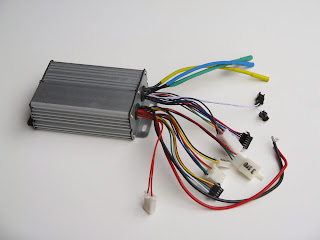 The power section of this controller is rated for 52 V, so I could also use a 48 V battery pack.  This controller is programmable, and I can set several operating parameters.  The bike is currently set up as a 500 watt bike, (36 volts x 15 amps = 540 watts), and this is proving to be a decent amount of power for getting up hills.

The motors I chose are very good quality, but more expensive than the kits being sold on Ebay.  I did this for a few reasons:
-The motors have the capacity to go up to 1000 watts under continuous use.  Although only 300 W is needed on a flat road, I wasn't sure what would happen on hills with a loaded cargo box.
-I knew the bikes were going to be loaned out, and wanted some safety margin so no one was stranded
-The bikes are an experiment, and being able to program the motor controllers is useful
-The seller had high recommendations, and was able to let me choose rim size and type, motor torque and speed, controller specs, and throttle control
This setup is medium heavy duty.  If I was building a bike with no racks for around town use, one of the lighter kits on Ebay would probably be ok.
Posted by Karl K at 11:50 PM