Before I write further about the second bike's front fork geometry, it seemed like there should be a front fork 101 to help put it into perspective.  Many times you will see a fork geometry diagram like this: 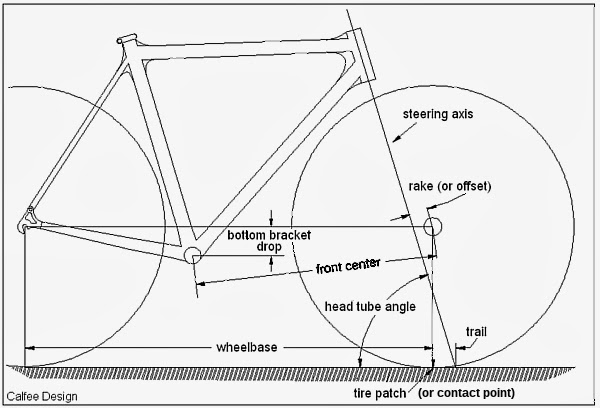 This is a very nice diagram, but I thought I'd add a little background to it to help with interpreting the new longtail's numbers.  Photo credit: Calfee Design 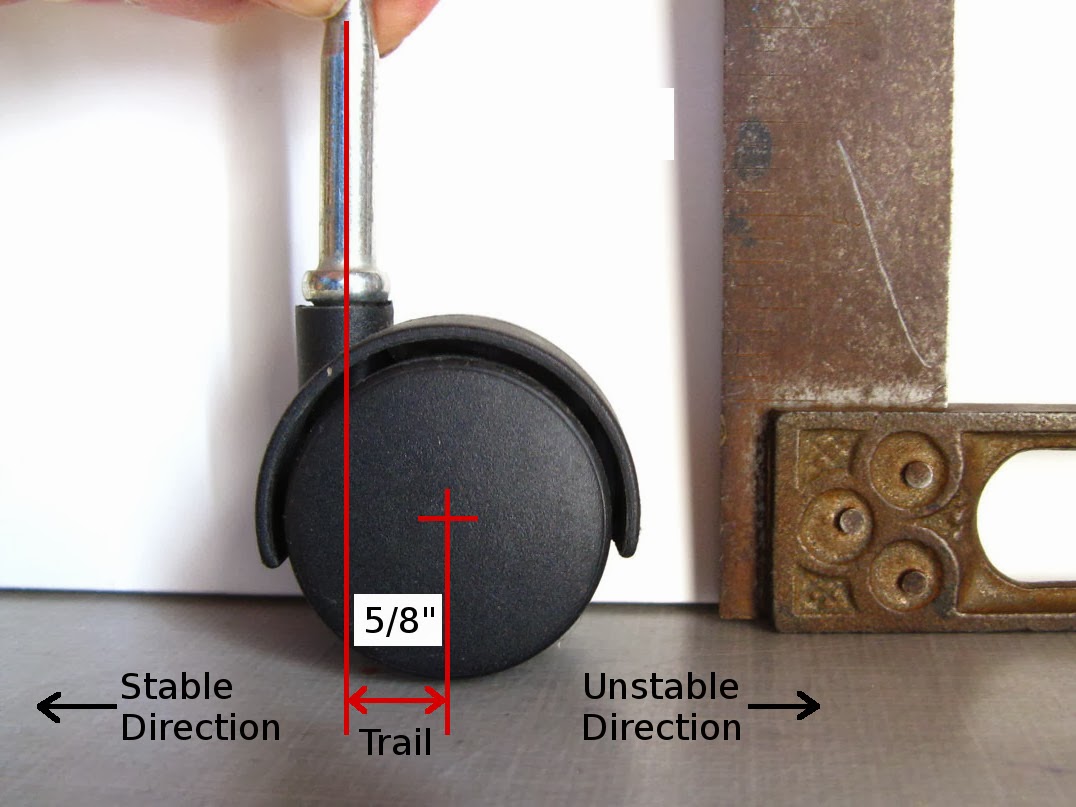 A caster is stable when pulled in the direction where the wheel trails the pivot axis, and wobbles around when pushed in the other direction, with constant steering corrections needed.  Also, a small amount of trail responds to direction changes quickly, and a large amount would pivot slower and take more effort to change direction. 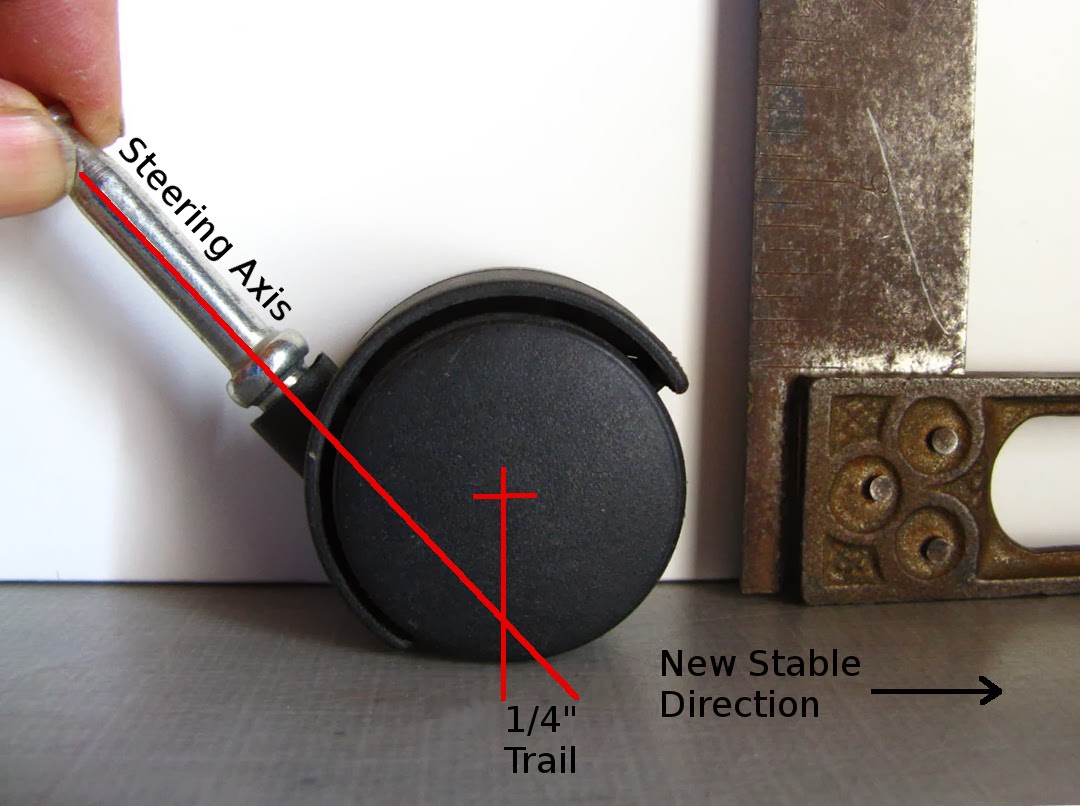 However if the steering axis is tipped, the trail can be moved to the other side of the contact point, and the caster becomes stable while moving in the other direction.  Another factor is added though- gravity also tries to make the wheel flop over. 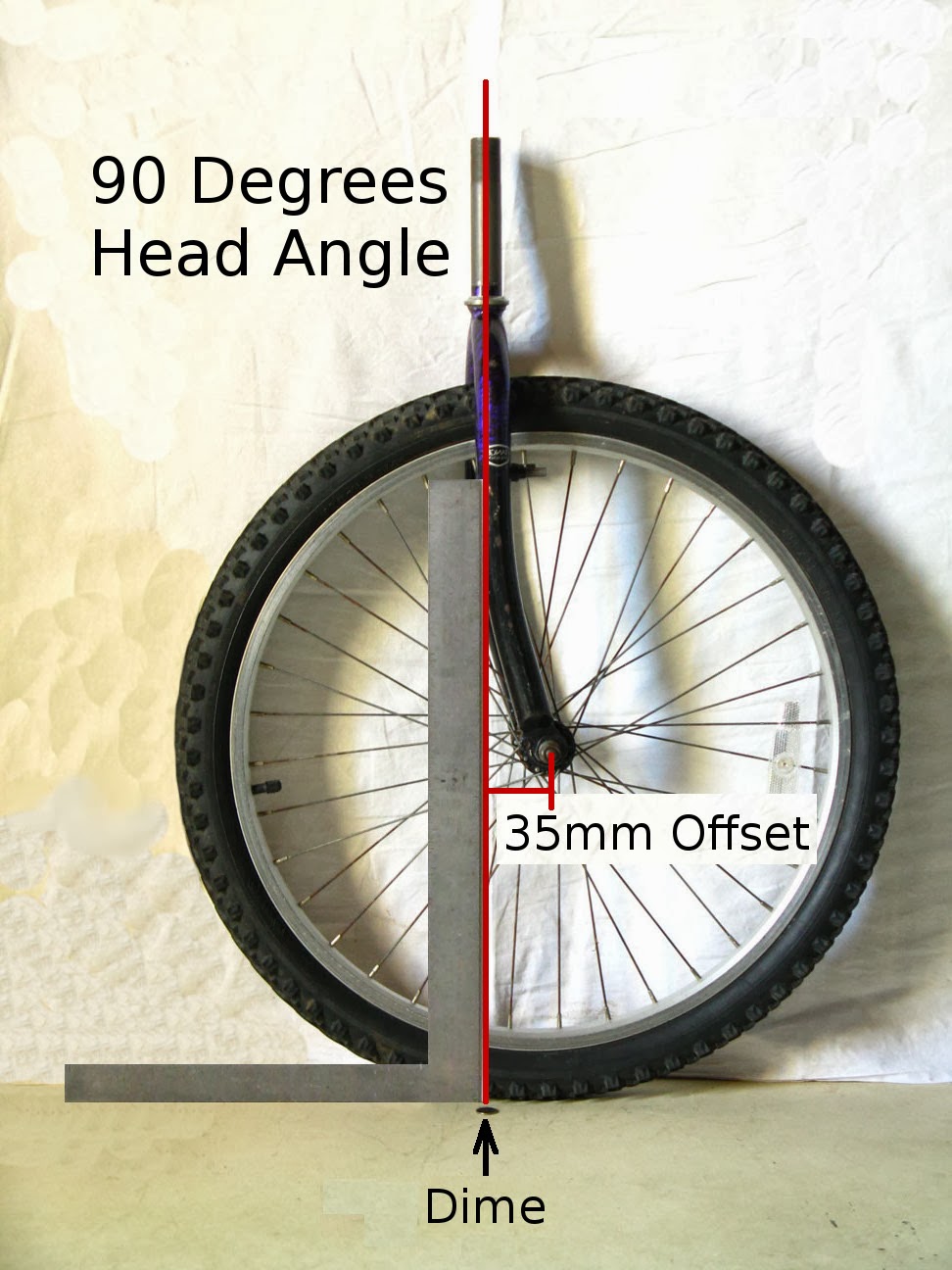 This fork has a 35 mm axle offset (a unicycle would have none).

With a vertical steering axis (90 degrees head angle with the ground), the steering is very quick.  If the front axle was not offset, the bike could literally turn on a dime.  This is great for stunts, but not pleasant at speed, and if an obstacle catches the wheel it can flip it sideways easily. 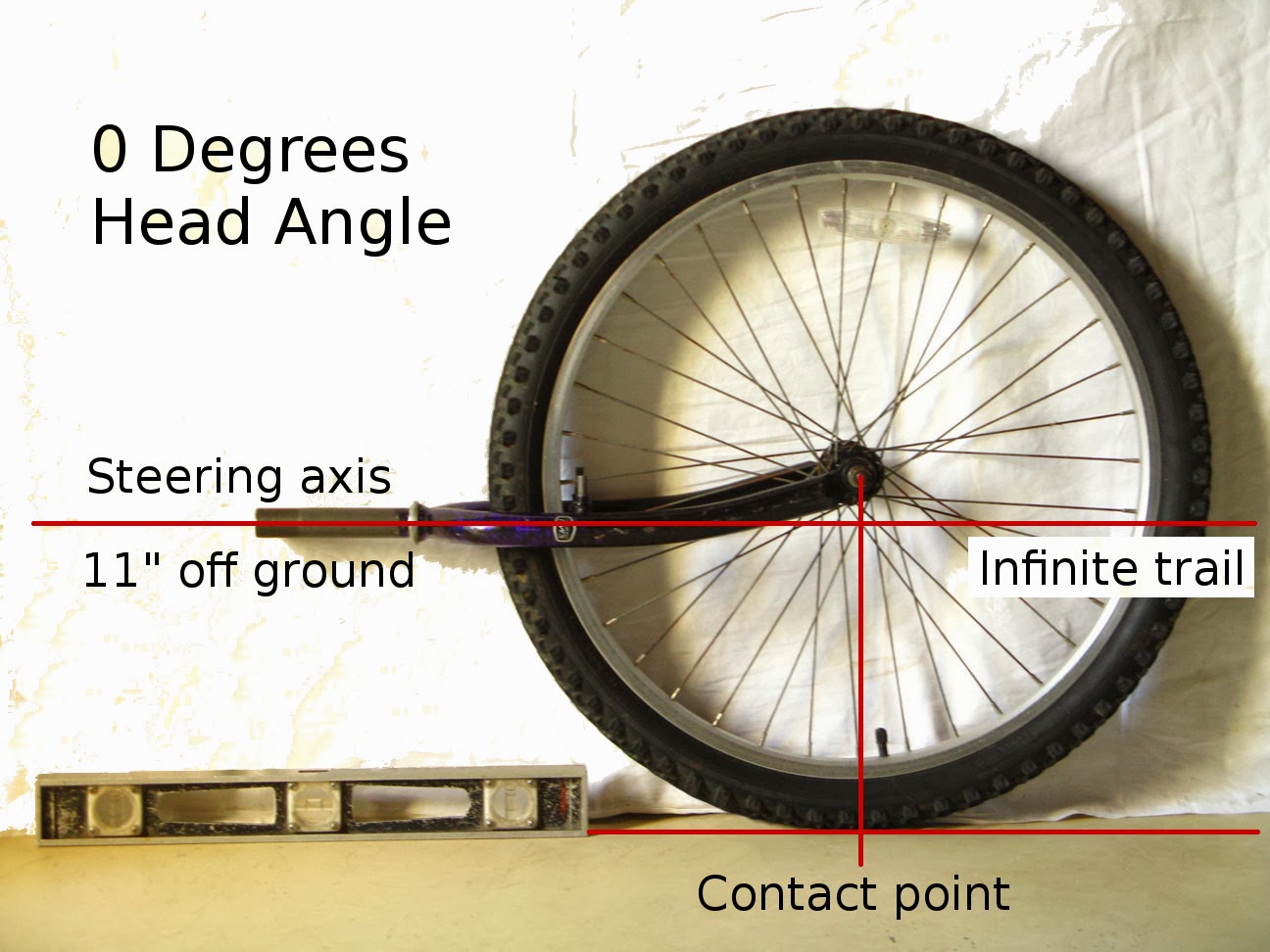 The other extreme is a horizontal steering axis (0 degrees head angle with the ground).  This is very stable at speed, and cannot be knocked to the side by an obstacle, however it takes a whole parking lot to make a turn. (The bike will turn sort of when the front tire leans over onto it's sidewall.)

At 0 degrees head angle, the tire naturally wants to flop to the side, which is 9" lower in this example.  To straighten the bike, the rider has to keep the bike lifted up 9" with the handlebars. 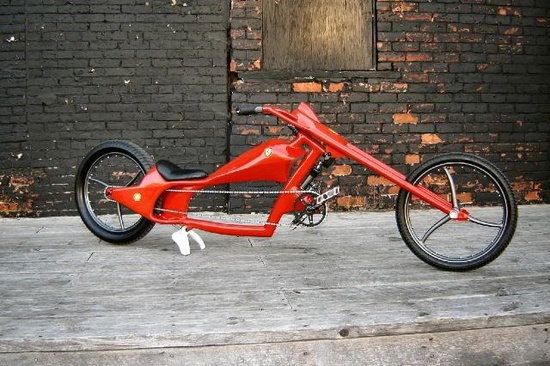 When the head angle is lowered and front forks are extended flop becomes a problem.  Above the pedals on this bike you can see a black spring device that is connected to the forks, to help keep the bike lifted up.  At more normal head angles flop is a much smaller effect than the forces from head angle and trail, but at speed it can make an instability problem worse.  Photo credit: Rob Lalonde, Ontario, CA, RHL Customs 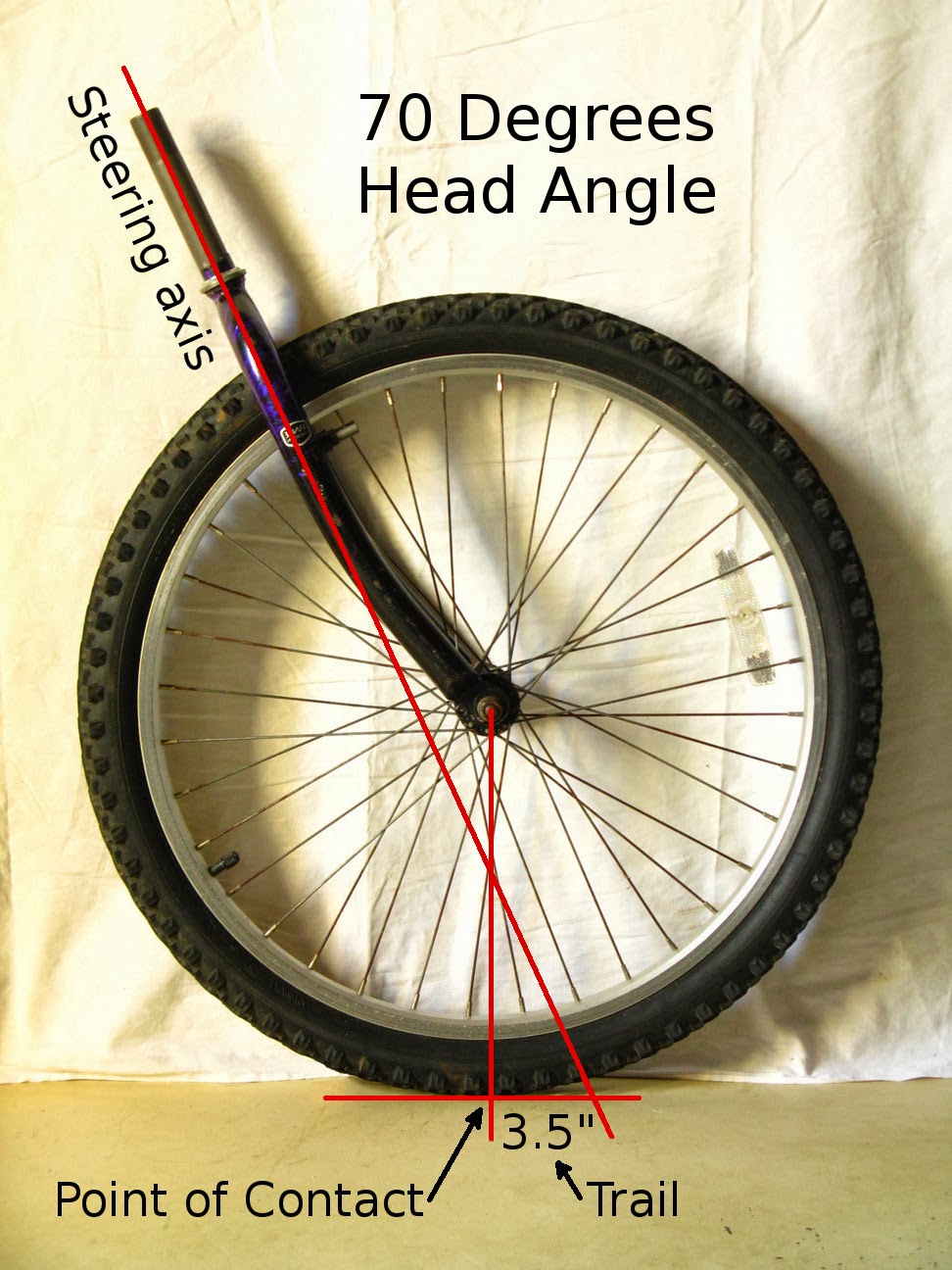 Normal production head angles have ranged from mid 60's up to high 70's degrees.  On a motorcycle this angle is called rake, and on a car it is caster.  Besides this range of 15 degrees in production bikes, the head angle will also change a degree or two on a bike with suspension as the frame tilts when one end or the other compresses or extends.  There isn't any narrow band of head angles that is correct because other factors also affect handling, and common angles have changed as rider preferences change.

The head angle combines with both axle offset and tire size to produce trail.  (A note: sometimes the front axle offset is called rake by bicyclists, but to avoid error because of motorcycle terminology, I use offset.)  Road bikes commonly have offsets in the 40 to 55 mm range, with 26" tires using the smaller and 29er tires the larger end.   Although changing the offset will affect the front end height vertically and thus the head angle, at 70 degrees the change horizontally in wheelbase is 2.7 times larger (tan of 70 degrees).  Looking at the 70 degree head angle picture above you can see that increasing the axle offset would move the Point of Contact forward, which would reduce the trail.

Bicycles (lower speed) seem to use a quicker handling 2" to 4" trail range, and motorcycles (higher speed) use a slightly slower 3" to 5" range.  These numbers should be taken as general guidelines, because many of the authors leave out a description of tire size (larger tires are slower handling, and they also scale the geometry up), and what they consider normal handling.  70 years ago racers preferred no trail and very squirrelly bikes (see Dave Moulton's blog ).  To prove that people can learn to ride almost anything, there are choppers with head angles at 45 degrees or lower: 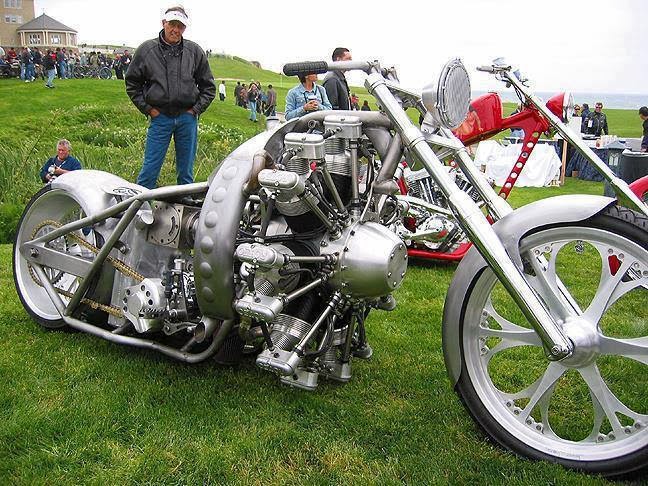 California chopper with about 45 degree head angle to help clear airplane motor.  This probably has 8" of offset, but I can't estimate the trail because the head tube is hidden.  Photo credit Steampunk

Neutral handling bikes travel through a corner consistently, a different requirement than being stable in a straight line.  This is a bit beyond Front Fork 101, but I'd like to mention it.  Low trail bikes tend to resist being leaned into a corner or straightened up, and tend to climb out of a corner (straighten out) by themselves.  High trail bikes will lean better and feel solid at speed, but also tend to drop into a tighter curve than the rider intended.  This set up depends on several other factors, such as tire radius and profile, wheelbase, weight distribution, riding position (for sensory feedback), so I'll just give an example of how difficult it is to predict:
The best handling motorcycle I've ever ridden was a BMW K75S, (sport), during the late 1980's.  I didn't ride the bike, it read my mind.   On the other hand, I've ridden a BMW K75T, (touring version), which is the same bike, weight, geometry, and tires, but with a different set of front fork springs and riding position, and it needed correction during turns and leaning.  I spent a lot of time trying to adjust it to match the S.  The S would be a safer bike than the T.

I think I'll finish with this nostalgic news story.  I've put a ruler on the head tube and it looks like the trail is only a couple of feet off, I would guess that he is having trouble balancing because the fork is flexible and he can't accurately correct for a flopping problem, look at the twist between the front wheel, the handlebars, and his position over the rear wheel: 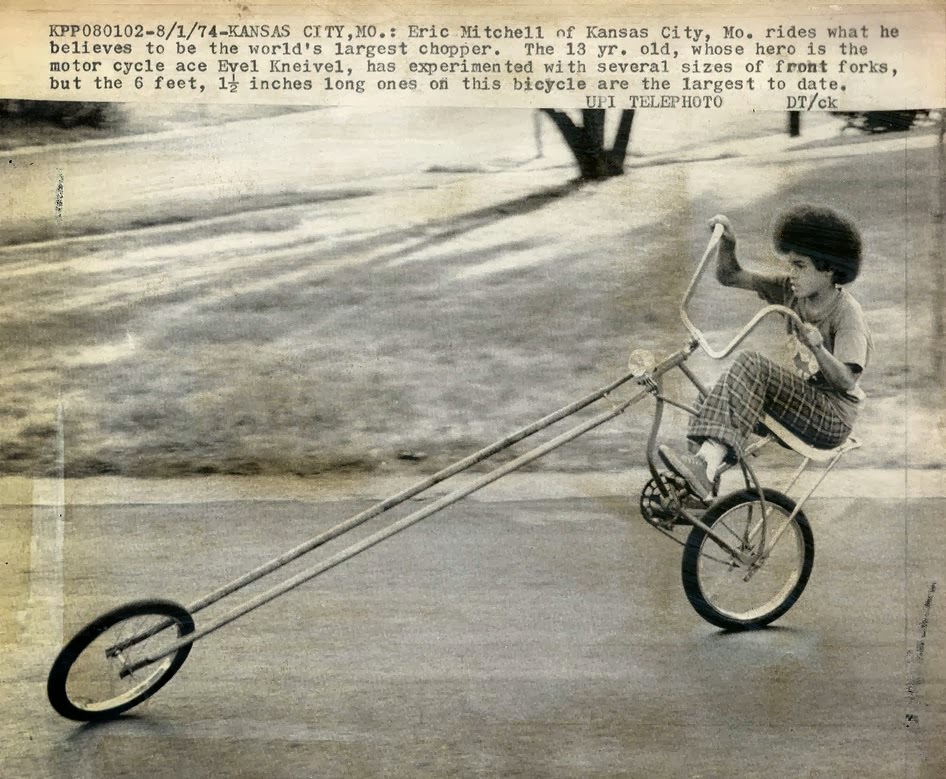