Jill wrote asking about body work for bicycles, she wanted something more noticeable in traffic.  In particular she mentioned the fietstaxi shown in Thomas Collardeau's video "The Cyclists": 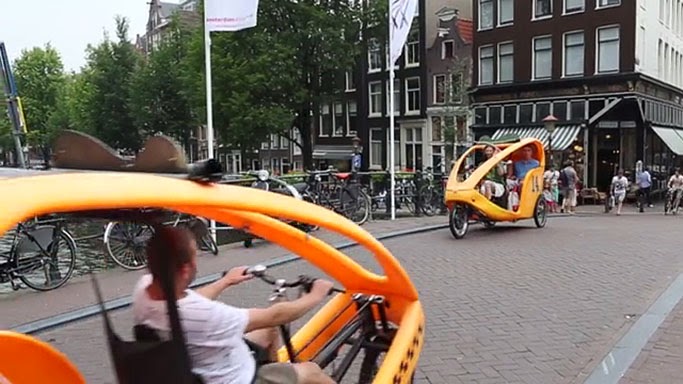 These are large molded plastic body pieces mounted on a trike frame, and though I managed to find them in four other cities, I couldn't find the manufacturer.  However this made me organize my thoughts about building bodies for bicycles- what would I prefer?  I've always wanted to build a Porsche 904 replica: 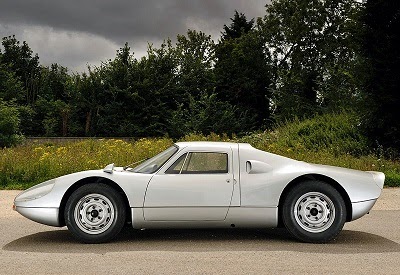 I can remember reading a test report of the 904 in Road and Track and falling in love.  I've looked the report up- it was July 1964, I would have been in third grade.  Those were the days, when a kid could dream about cars without any thought of what a disconnect from reality they are.  I still think this is a great design.  Ferrari did too- they tried to copy it, but they didn't do quite as good a job: 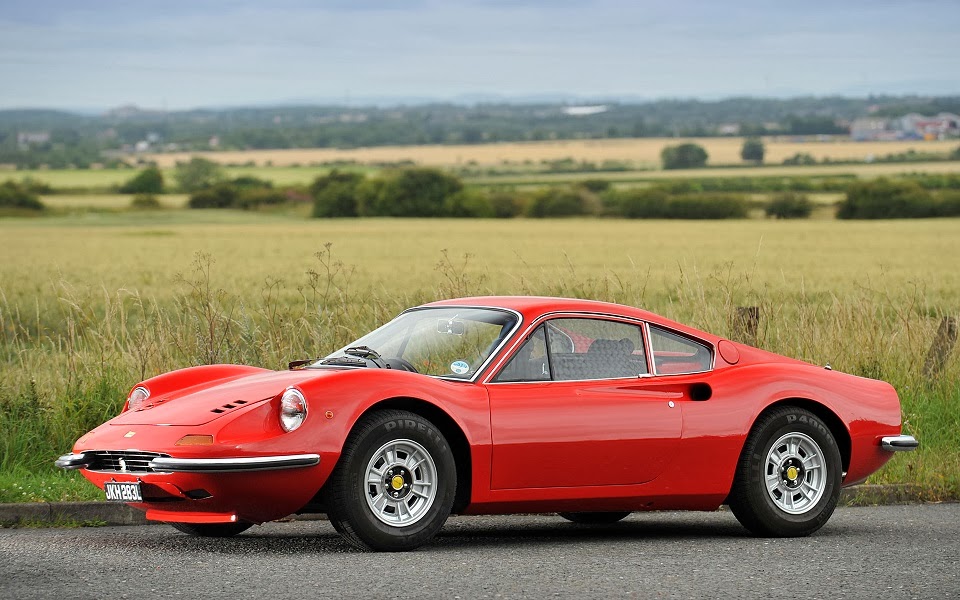 So if I could, I'd make my bike look like the 904.  Maybe when I build the mid drive bike there will be some vestiges of it that show up.  There is a person in Vienna who actually has built a pedal powered Porsche, but it won't work for my daily needs, he really needs to add an electric motor or two:
Ferdinand GT3 RS pedal Porsche, World's slowest Porsche, Video credit: Vishakx3

Human powered vehicles are operating in the 50 to 300 watt power range, and larger bodywork on a bike is going to take more power to move it.  I don't usually think of aerodynamics affecting a car's performance under 25 mph, but a bike is working on a much smaller power scale, and it does affect a bike at much slower speeds.  There is also the extra weight going up a hill.  The delivery bikes in Paris, or fietstaxi in northern Europe, China, or India are feasible because the average speed of a car in a city is so slow that a cargo bike can match it, and sometimes even do better. 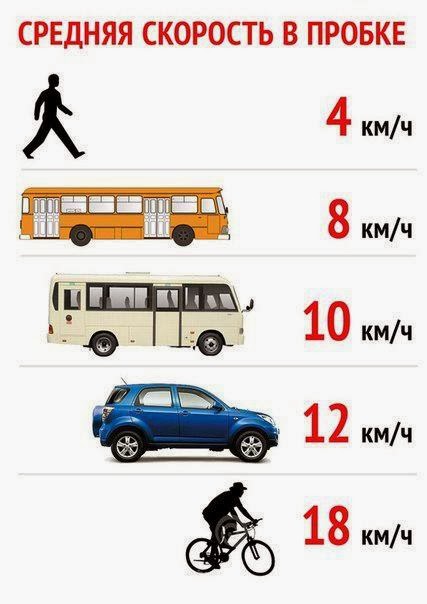 An effective body shape for my longer distance errands bike would be much smaller.  A 3 wheel version would be the Velomobile or Quest trikes, but I'm still thinking about 2 wheels, so theoretically an ideal body would look more like the International Human Powered Vehicle bikes: 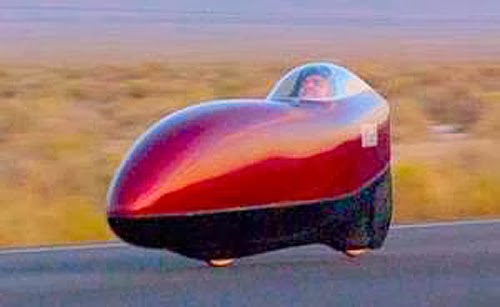 Varna Diablo, 2008 IHPV record holder at 82.33 mph, piloted by Sam Whittingham.
Notice the narrow width, fully covered wheels, and low height (24" to hood, 30" to canopy)
This record was broken in 2013 by Delft University students at 83.13 mph.
Note- these bikes do not have a motor.

A more practical road version would be the Velerique from UK, made from 1972 to the 1980's: 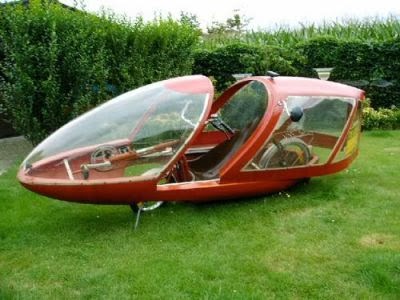 Sliding canopy on a recumbent frame.  There are cutouts in the floor
that allow the front wheel to turn, and for putting feet down at a stop.

Cedric Lynch in the UK has also put on many miles as a daily ride in his home built fairing: 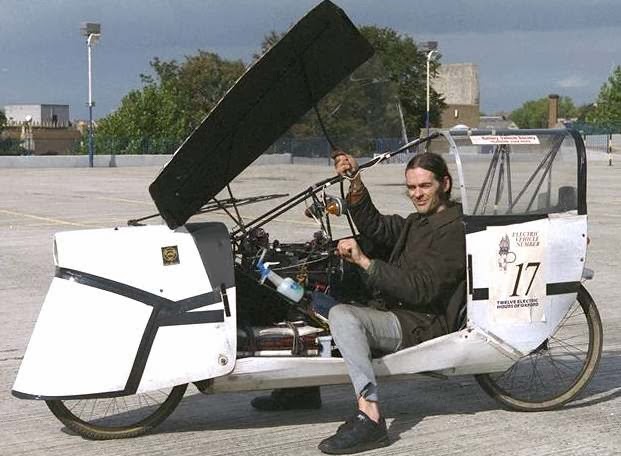 The bottom of the doors have flaps for putting feet down at stops when the body is closed.
One report mentions a 60's mph top speed under favorable conditions.

It is mud season as I write this post, and getting a bike through 2 to 4 inches of mud or 6" deep ruts in the road needs to be a design goal.  Bodywork could be reduced down to just a simple fairing on the front to make it easier to push along, and it would still be helpful.  When I started to ride a motorcycle on the street in the 1970's, Saeng was selling a gorgeous parabolic front fairing that covered down almost to the front tire, that they claimed increased gas mileage by several percent.  The fairing was similar to the molded clear plastic bubbles on the front of many trikes and recumbents now: 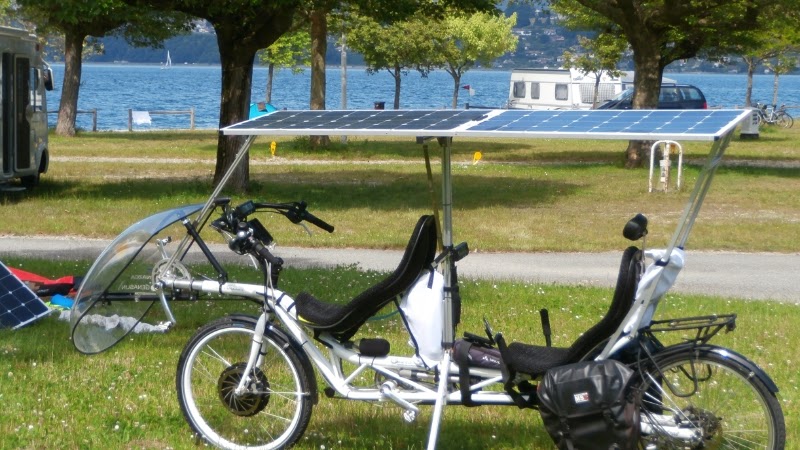 A problem with the early fairings was that they were mounted on the handlebars, and any unexpected crosswind would steer the bike, even light crosswinds were a pain at highway speeds.  Later motorcycle fairings like the Vetter were frame mounted, but were also much bulkier to cover the front forks, and thus heavier.  More modern fairings reduce the size even more, tending towards ninja or sport touring half fairings. 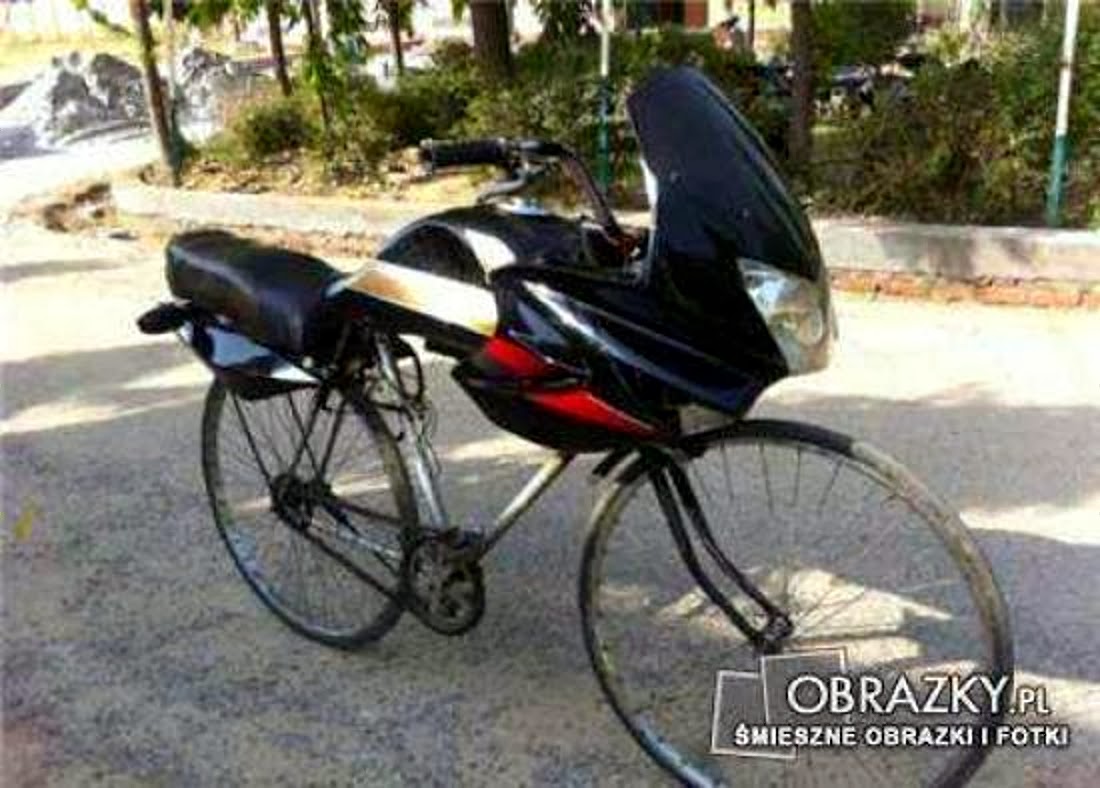 Crosswinds are an important consideration, even for the small area of the bodywork on the human powered speed record bikes.  The minimal area that will get the job done is best. 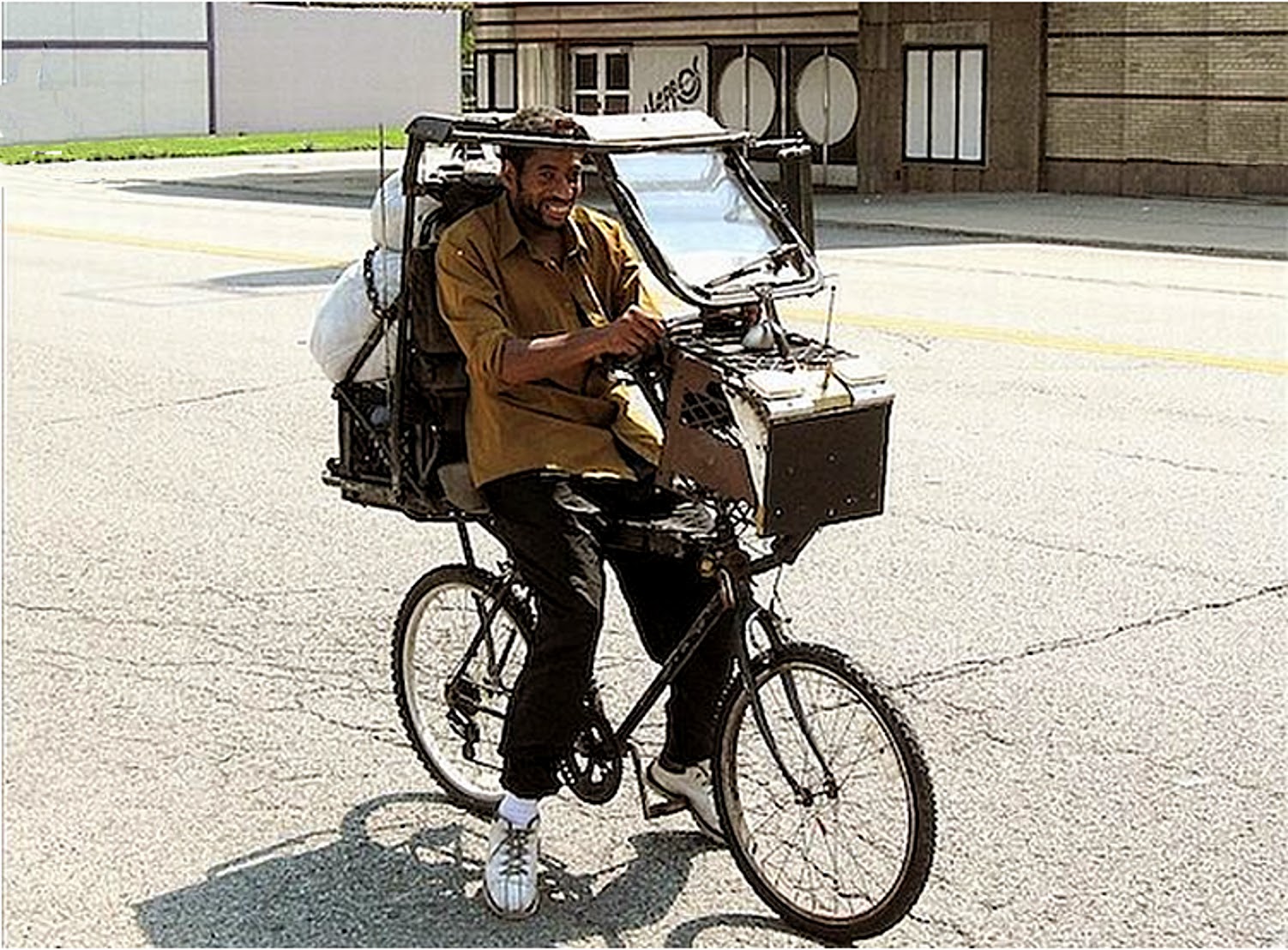 I love this cab.  He has a handle bar basket with storage that is protected from the
rain and sun, a windshield with a wiper, a huge rear mirror, a sunroof, and
a radio in the dashboard.  It is probably reasonable in a crosswind, but there
is probably a fair amount of forward air resistance.  With a smoother exterior
and a lower profile, this could be a good model.  Photo credit: unknown

The gains from full bodywork can be air resistance reduction, weather protection, load capacity, and visibility to traffic.  The disadvantages can be air resistance and weight increase, loss of handling and maneuverability, hauling it through bad roads, and storing the bike.   A good design for getting me over to the next town and back would be somewhere in the middle.  In the next post I'll cover aerodynamic basics to help with defining the trade offs, and then do a post looking at some examples, such as the ELF.
Posted by Karl K at 11:59 PM