Freewheels and bearing drag for a mid drive

Santa was very nice and brought lots of mid drive presents.  Most of these pieces are meant for the third bike, as the second bike will have a simple direct drive hub motor in the rear wheel.  There are about half a dozen ways to connect a motor in the center, and these pieces give me a chance to experiment before committing to a design. The general idea is that you don't want the motor spinning when pedaling, nor the pedals spinning when the motor is running, unless the rider wishes to use both.  This requires at least 2 one way rotation devices, such as freewheels or one way bearings, and fitting it all between the pedals is a challenge.  Most mid drive bike motor manufacturers replace the standard bottom bracket with a special casting with the drive train inside.  For those doing it on a smaller scale, a motor can be connected three ways:

-left or right side of rear wheel using a single speed gear set with a large wheel sprocket, (this works well for a larger 4000 to 8000 watt motor)
-in the chain before the rear derailleur, which gives about a 2.2x range from high to low speed
-before the pedals, which gives about a 3.5x range, (this is the one I'm aiming for)

A manufacturer using a new casting can use either concentric cranks or offset shafts to separate the motor and pedals.  This is not an option here, and although the motor will be remotely mounted, at least one freewheel and an extra sprocket must be mounted on the crank.  (If both freewheels are placed there the cantilevered load becomes a concern, and a provision should be made for supporting the outboard end of the assembly.)  Mounting directly on the crank arm using the common freewheel 1.375" x 24 tpi thread saves some space: 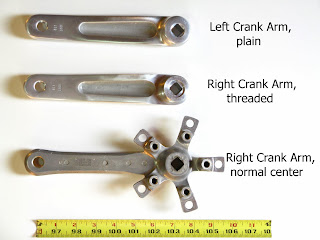 The threaded right crank arm allows a freewheel to fit in the small space. 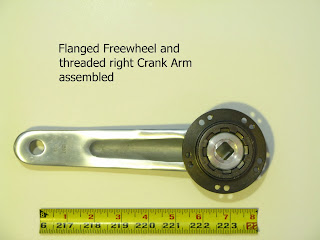 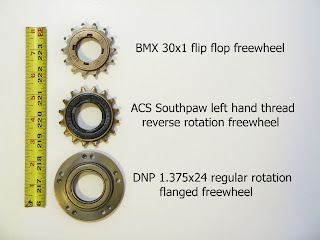 A reverse rotation freewheel is usually needed for the second freewheel for the motor connection or it will unscrew, and unfortunately these must be adapted from single speed freewheels as there aren't any flanged units. 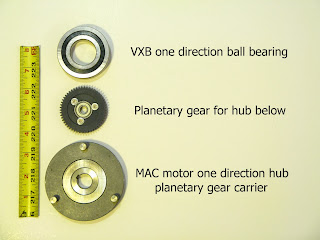 Bearings that have either sprags or ramps in them will spin in only one direction, and can be used in place of a freewheel. Since the motor speed needs to be slowed down, a planetary gear set built with a one way bearing is very tempting.  However there are problems with the inside bore diameter fitting around the crank bearings, and also with enclosing the gear assembly, which makes this a more serious solution for someone willing to build a case and/or custom large diameter one way clutch. 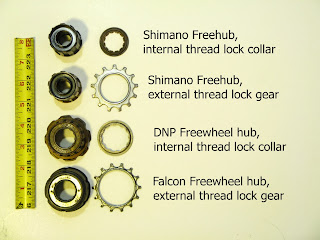 I've also collected a few freewheel hubs and freehubs, just in case it looks like a lay shaft would be the best fit.  They would have a problem fitting down in the crank area. 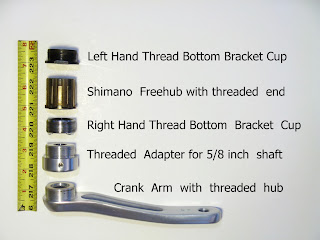 Adapters that could hold the one way devices. 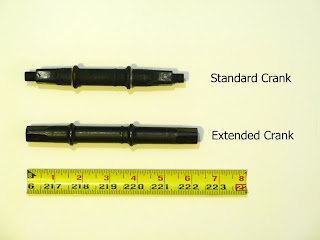 A crank with an extended right side to allow more stuff to fit between the pedals.

As long as all the pieces were loose, I decided to test them for drag.  My general impression has been that freewheels (with a ratchet) have less drag than one way bearings (with sliding contact pieces), but it would be nice to know how much better.  I wrapped a thread around the outside of each piece and pulled on it.  Three forces- the force needed to start the device moving (break out), the force to keep it just barely turning, and the force while pulling as fast as I could while still being able to take a reading, were measured with a small postal scale that had a 0 to 120 gram range.  Dividing this by the thread circle radius gave these torque ratings (the low to high order is based on the average of all three readings, but only the faster speed readings are shown here):

The measurements formed 3 groups:
-the regular ball bearings with 0.4 to 4 grams/cm of drag torque
-the freewheels with 14 to 17
-the one way bearings with 22 to 27

There were two freewheels that didn't do well.  The second flanged DNP is new and I'm not sure what is going on, as the other one has much lower drag. The Shimano freehub probably has some very old and dirty lubricant inside, maybe even rust, so I don't feel it is representative, just an example of what bad maintenance will do.

The best choice appears to be freewheels, but it should be noted that these are all very small amounts.  The lowest plain shielded bearings cause a drag when riding that is equivalent to lifting 0.002 ounce- not even noticeable, and the worst case dirty hub is only 0.4 ounce drag, which is similar to lifting two pencils.  If a bike was never maintained it might be possible for the front and rear wheel bearings, and the crank bearings to have that much drag also.  The bike would be only a little bit less rideable. The point here is to avoid adding many more bearings while building a mid drive, because maintenance can not be guaranteed.
Posted by Karl K at 6:39 PM