The first two bikes have motors that are built into the hubs, this makes for a clean and robust design. 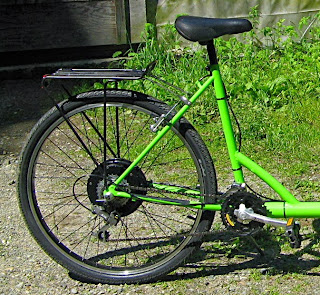 However this is the problem: 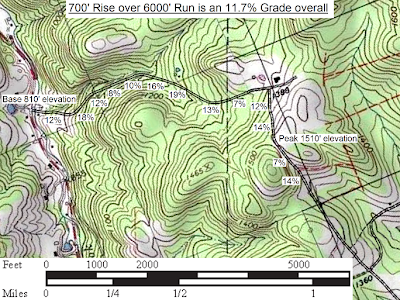 When I ride over to Woodstock, it is easier to get off the bike on the steep sections and walk.  This isn't as bad as it sounds, because I can turn the motor on low and have it pull me and the bike along.  (This would not be possible with a Pedelec or BionX style throttle control.)  To put this into perspective, in my car this is a second gear hill under good conditions, and when there is washboard it is first gear at 5-10 mph, which is not much faster than the bike.

The solar electric cargo bike motor is currently set up for 500 watts of power, which isn't enough for riding up this hill. There are a few ways around this limit:
-I can reprogram the controller for more amps.  This is easy, but drains the batteries more quickly and the motor will run hotter.
-I could put on a different battery with a higher voltage than the current 36 volts, (this is called over volting), as the motor is rated for up to 100 volts intermittently.  This is more expensive.
-A second motor and extra batteries would do the job:
Fast 2WD Electric Bicycle- Top Speed 50 mph, video credit: RNickeyMouse

Since my goal isn't 50 mph, but going up the steeper hills around my area, it is also possible to use a regular power level motor and battery pack, and connect it as a mid drive to the pedals so that the derailleur gear reduction system is used, just like shifting to a lower gear in a car. I've been avoiding a mid drive because:
-it is more complex (more things to wear out or break)
-at the higher power levels it wears out chains and sprockets quickly
-2 pawl freewheels don't like the power, so a good quality freewheel is needed, and a freehub is better
-if you shift without letting up on the power you can break stuff
-they are generally noisy- the good ones sound like a turbine (which is neat), the bad ones destroy any chance of a pleasant bike ride
-the width must fit between the pedals, so it must use a small motor, or a second chain to a remotely mounted motor
-a few bikes use the one regular chain, with the motor drive tied in to the upper chain section.  This gives you only the gears on the rear wheel, and it can not use the front gears
-many mid drives extend the gear reduction train upwards, which raises the center of gravity higher than a hub motor.  However I don't think this matters anywhere near as much as where the battery is mounted, and both types of bikes commonly use the front triangle or rear rack.  I've ridden a bike with a very large battery on the rear rack and it tended to oscillate.  One way some riders are getting around this is by carrying the battery in a backpack, such as in the video above, and also on some European mountain eBikes.

I'm trying to design for average riders and average budgets.

Of course it is possible to get a little obsessive about a mid drive setup: 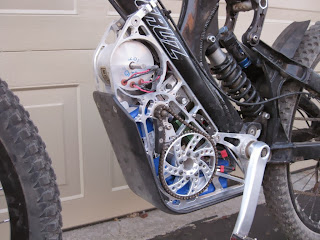 Which usually results in something like this:
Electric Downhill Bike (66 mph run), video credit Kim Reeg

Unfortunately this kind of usage is a pretty heavy draw on the batteries, there is a large aerodynamic drag and the range suffers.  I don't think there will be many of these bikes, as it is just too complex and costly.  In addition to the drive setup, you also have to upgrade hubs, rims and front forks, and start using moped or small motorcycle tires and brakes.  For a cargo bike it needs to be a little more balanced, trading off some of the performance for better range.

Many countries in Europe or Asia have set a power limit of 250 watts for electric bikes, or about the power of a professional bike racer.  While the solar electric cargo bike's average energy draw is 196 watts, in real life this turns out to be too small for getting the bike and cargo up many hills, and the power draw goes up to the 500 watt limit while speed drops.  I can imagine riders that aren't in good health wanting more power.  Most European manufactured drive systems (AEG, Bosch, Conti, MPF, Panasonic, Yamaha) have 250 watt motors and must be built as a mid drive gear reduction system to make it work- you shift down and just go slower.  I think it would be easy to overload a 250w motor while hauling loads in Vermont and greatly shorten it's life.   However the 500 watt hub motor is close, and with gearing added might be a respectable ride up my hill.  Looking around for good mid drive examples, Audi's eBike is pretty well balanced and has received a lot of positive comments:
Audi e-bike, at Worthensee show, ridden by Julien Dupont.  The bike in this video probably is traveling around the legal European electric bike maximum of 25 kph (15.5 mph), and you will notice that Julien is riding with his helmet unsnapped.   It also has a few things that could easily be left off of a cargo bike, such as the carbon fiber frame and wheels, and wifi control.  Most bikes like this have a custom gearbox at the pedals with slip clutches for the pedals and motor, and internal gears.

The geared hub motor was a blast for 500 miles last season, and I will continue using them, but I admit to my usual need for speed up long, steep hills (or at least riding instead of walking), so I am thinking about mid drives.  I also want the assist to be strong enough for people with different levels of health to be able to ride.  There is plenty of power available from an electric bicycle, as you can see from just a few seconds of this video:
Extremely high power tadpole trike, video credit Matt Schumaker

The design problem is how to trade some of the power for range, but still have it there for the hills.  There are several ways of connecting a motor as a mid drive, and I'm waiting for all the Christmas presents to arrive so I can start experimenting.
Posted by Karl K at 10:28 AM