To be able to compare the bakfiets and the longtail, I've chosen a very good speedometer. The Cycle Analyst can be ordered with an external shunt and be used on any electric vehicle, but the model used on the Bakfiets was designed to interface directly with the motor controller, and has a 6 pin plug in.  This uses the shunt inside the motor controller and should be pretty accurate, as the shunt value is specified by the factory to two decimal places.  Unfortunately this CA is not able to use feedback from the motor hall sensor phase signals to determine speed, because the geared motor has a slip clutch built into the gear carrier that disconnects the motor from the tire.  The CA installed on the bike needed to be equipped with an external sensor on the front wheel for measuring speed.

There is a wealth of performance information that is tracked, the easiest way to explain is to run through the screens:

Same as first screen, but with Miles toggled to Amp hours

Total Watt hours used on trip, and Watt/hours per mile (this is similar to miles per gallon)

For motors that are direct drive- Regeneration electricity.  The geared motor can not do regeneration, but a very tiny amount amount usually shows up, because when the motor is turned off the collapsing magnetic field inside it generates a back emf that feeds electricity backwards.

The minimum and maximum Amps, and minimum battery Voltage.  Minimum Amps will go negative with regeneration.  Maximum Amps is programmed to be 15, but I have decide not to change the shunt value to lower the Amax to 15, because it would reduce the Wh/mile below the 13.2 average, which is not likely to be correct.  Volts minimum is how low the battery drops under a heavy load, and an older battery will drop more.

Maximum Speed, Average Trip Speed, and Elapsed Time for trip (total of any time the wheels are turning)

Number of Cycles and Total Amp hours drawn from battery, and Total Miles traveled since the memory was reset.  LiFePO4 batteries have a 1500 to 3000 cycle lifetime depending on how hard they are used, and usually the battery dies from age instead of cycles.

This is pretty much all the information needed for the average cyclist, and even one using the speedometer for light training purposes.  However since two separate bikes are being compared, it would be useful to compare the differences going up or down a hill, or cruising along flats.  A data logger (Analogger) was added to the speedometer for a closer analysis. 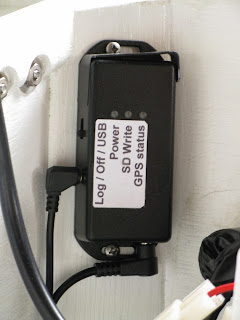 To ensure correlation, GPS data is written alongside the Amp hours used, Volts, Amps, Speed and Distance.  The data file looks like this (new values are written on a defined interval, currently about every second):

The corresponding GPS-NMEA information is written out in 19 sentences for sequential locations.  This gives data that should be a very close fit when comparing performance between the bakfiets with geared motor, and the longtail with direct drive motor with regeneration.
Posted by Karl K at 7:12 PM