The Strolling of the Heifers

The Strolling of the Heifers was founded in 2001 to benefit local food, farmers, and healthy agriculture.  It has grown over the years, and now has a Slow Living Summit to go with it.  Brattleboro cargo bike advocate Dave Cohen put out a call for cargo bikes for the parade, and I took the Bakfiets down to it.  A full range of bikes showed up, which included panniers, racks, trailers, trikes, longtails and bakfiets.  I tried to take some pictures while riding, but there is a more complete video of the parade on their website (the bikes are at minute 41). My overwhelming impression was amazement that so many people wanted to watch cows walk up main street.  Bikes are much faster.  But in keeping with the spirit of things, we rode at a heifer's pace, (which I think is just a little faster than the pace set by the preschoolers in my town's 4th of July parade). 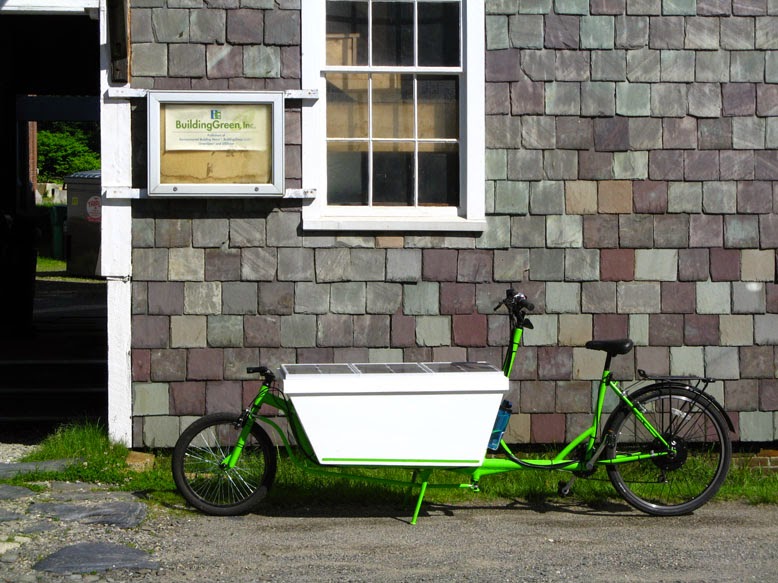 I parked on the south side of town and rode in to the parade.  On the way I had to stop at the offices of Building Green, the energy efficiency building journal, next to the Estey organ museum, for a Green Photo.  The row of old mill buildings along the street all have slate siding. 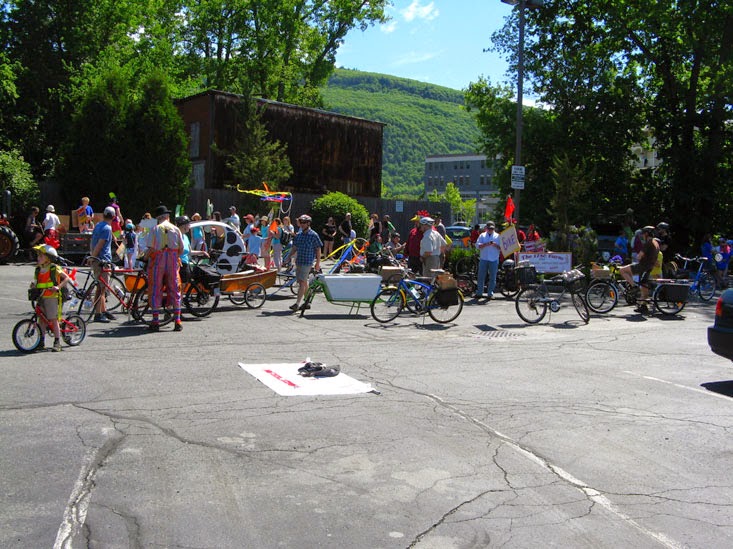 This was our staging area, the hill in the background is across the river in NH.
(Click on pictures to enlarge.) 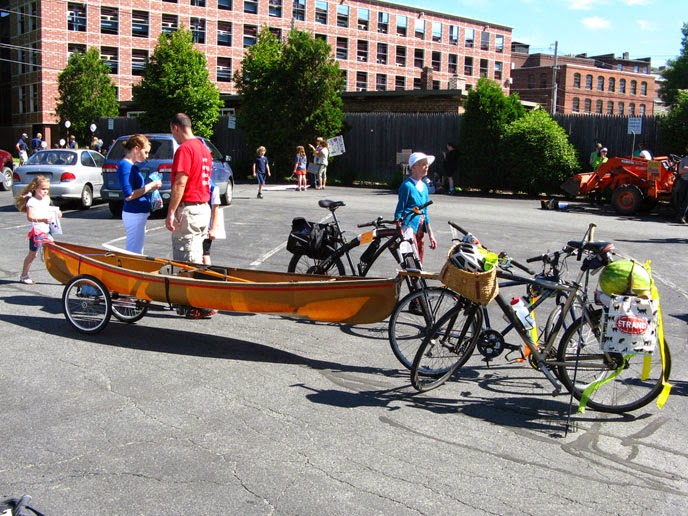 Among the bikes were Kathleen's trailer/canoe, 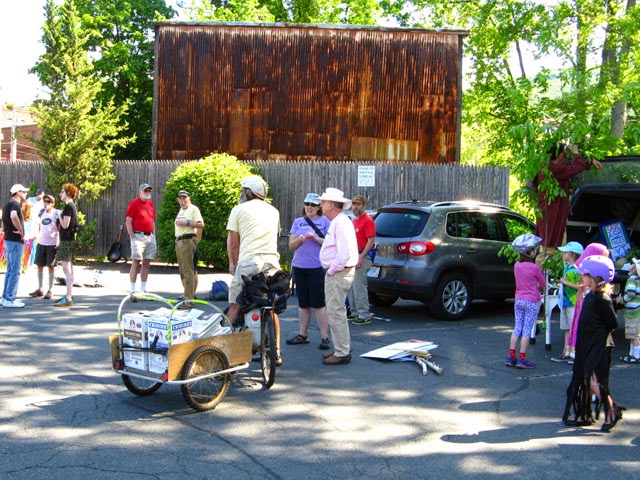 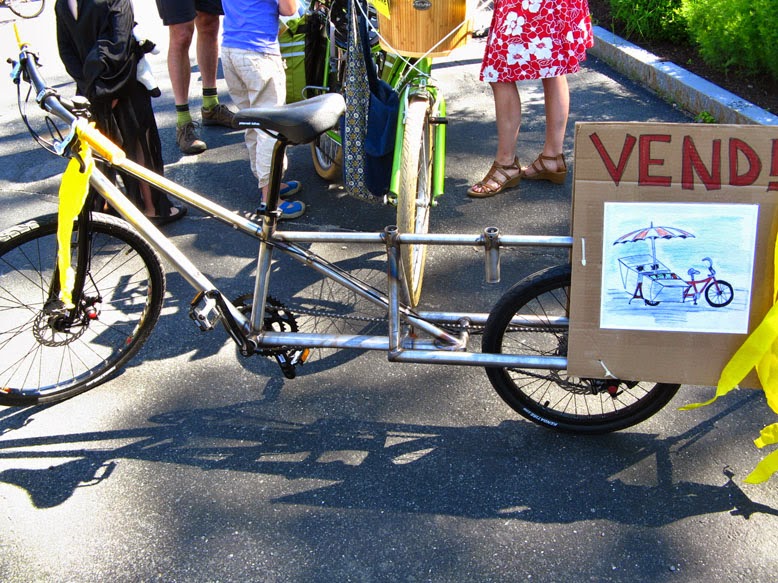 the frame of a new vendors cart bike being built by Hannah, 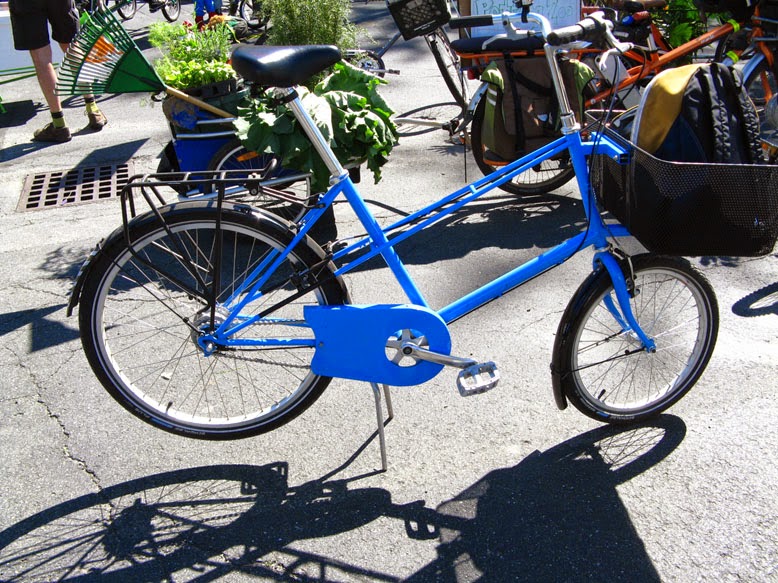 and a nice cargo bike with a front box built by Jesse of Seneca Bicycle Works. 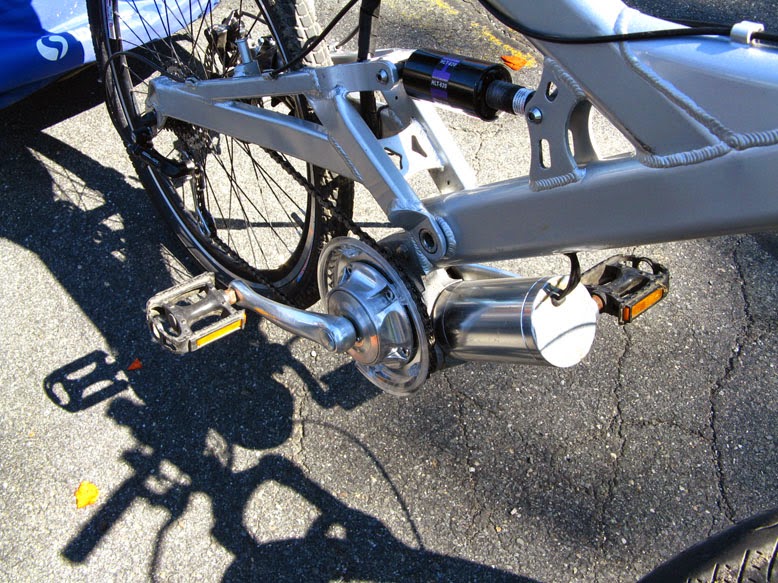 This is Todd's custom ebike with a 2 speed front hub, pulling a trailer. 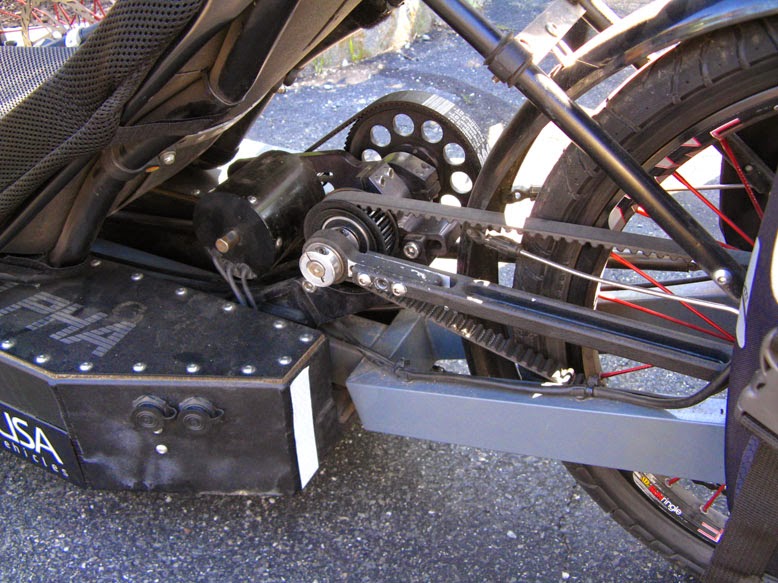 The drive system of an Outrider trike in the parade.  Note there are only 3 large wires coming out of the motor, so there is no rotor position feedback.  This makes the motor harder to control and not as efficient, I'm in the middle of planning the motor and gearing for the third bike right now, and plan to cover this more in a future post. 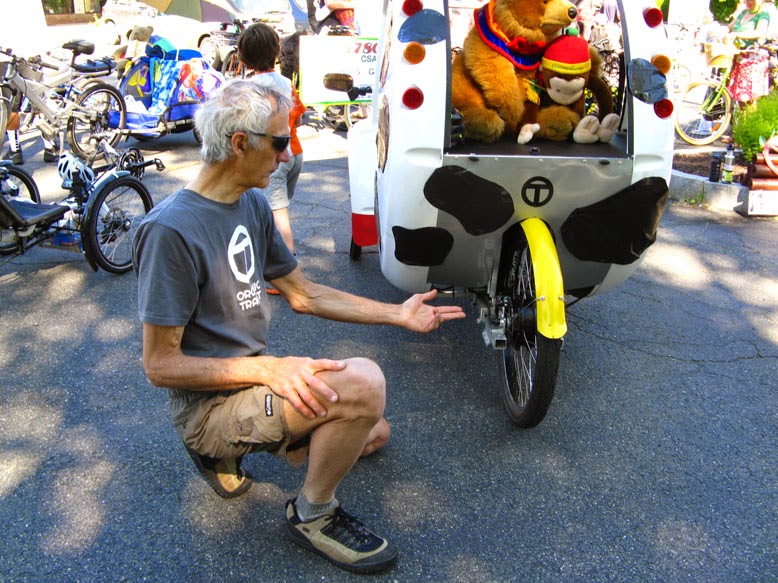 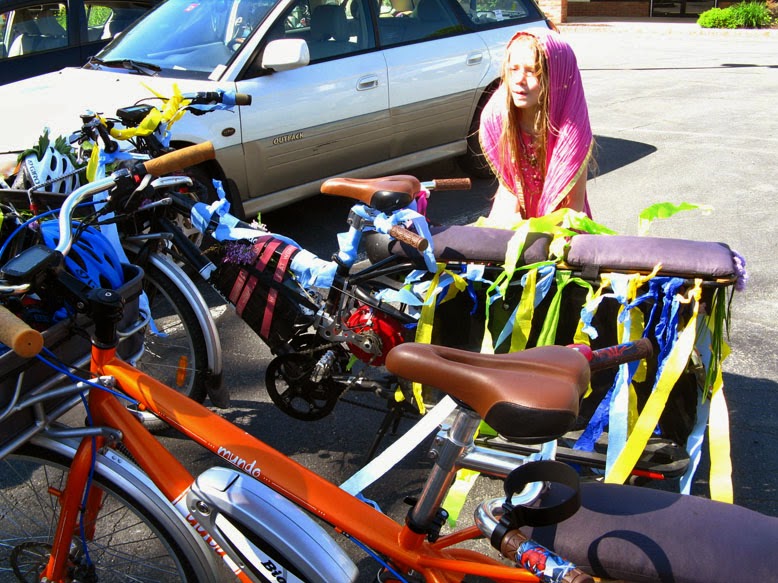 Two Yuba el Mundos with a Stoke Monkey and a Bionx, and a passenger who is ready to ride. 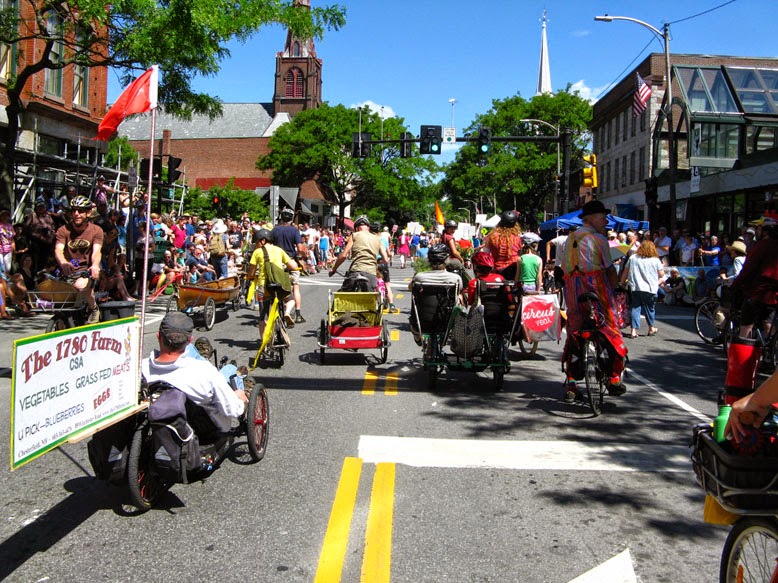 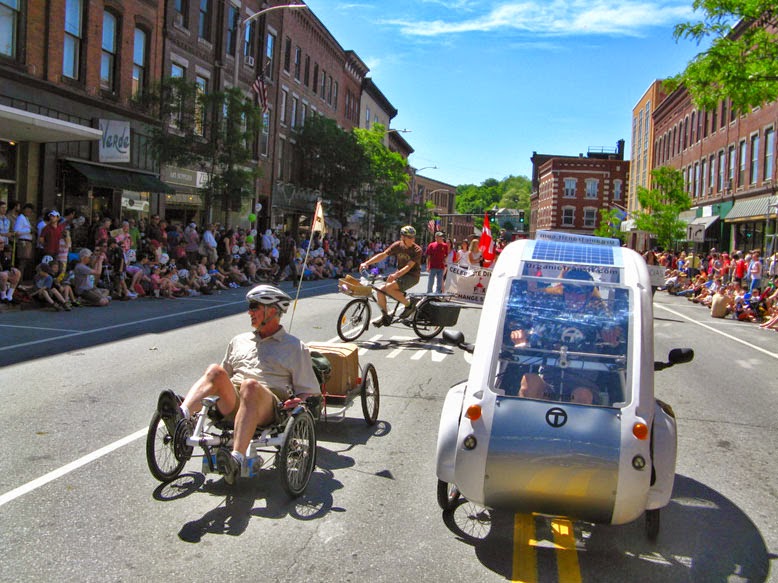 Looking back down Main Street, (with 1/4 mile of people already). 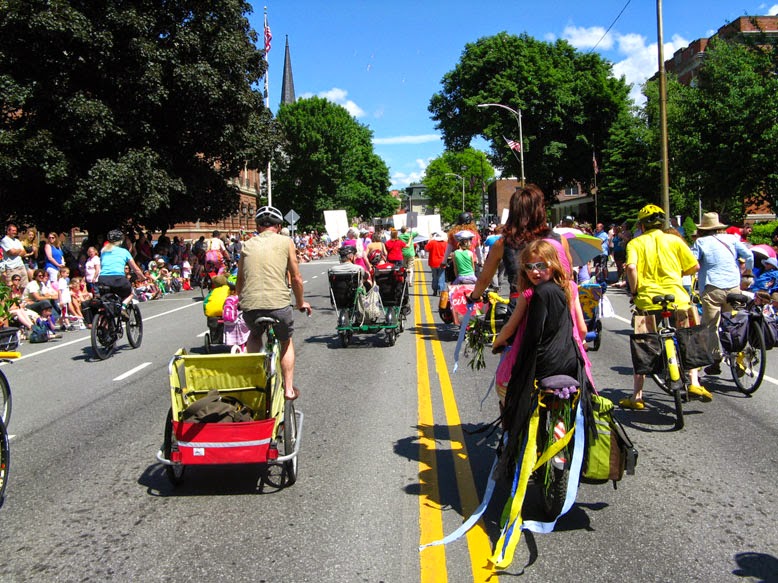 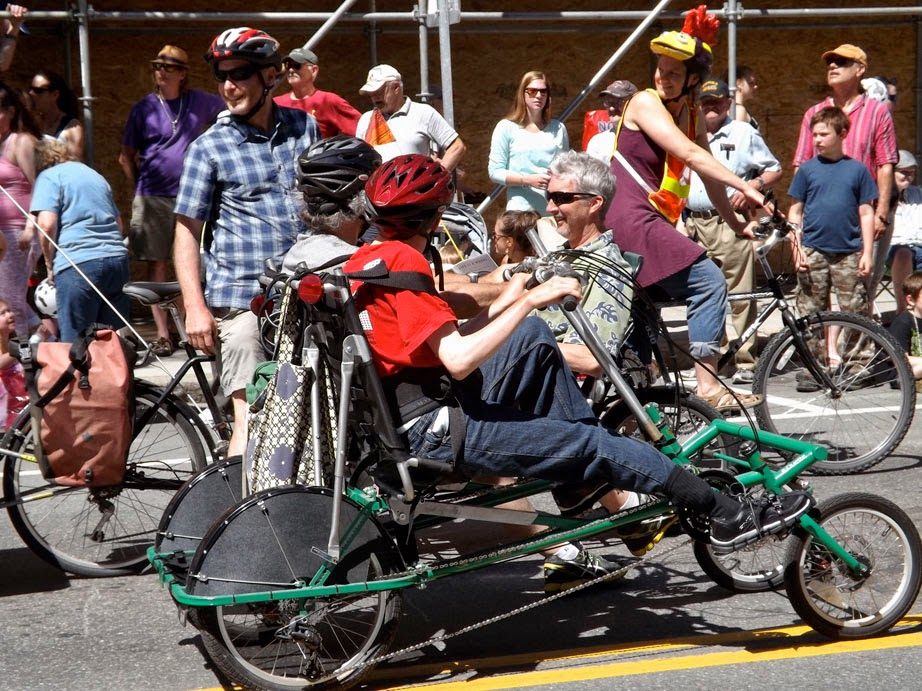 Stephan and Eliah in their Quadracycle.  Each rider was connected to one rear wheel,
with no link connecting the two sides.  Photo courtesy of Dave Cohen 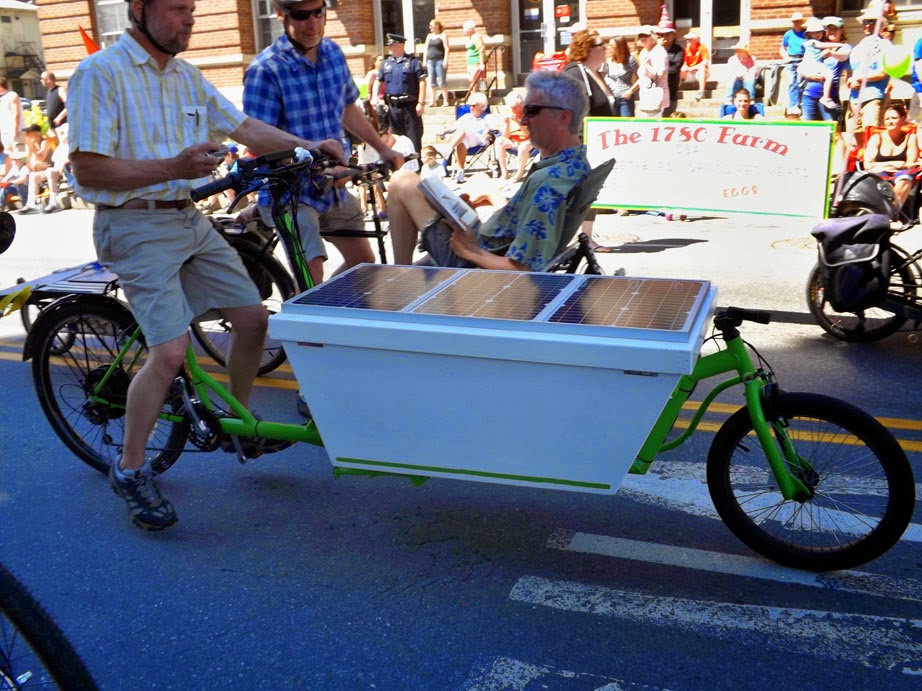 My Bakfiets. The person riding the bakfiets next to me is Dave Cohen.
His passenger (sitting backwards) is reading the book "Life is a Wheel".
Photo courtesy of Dave Cohen. 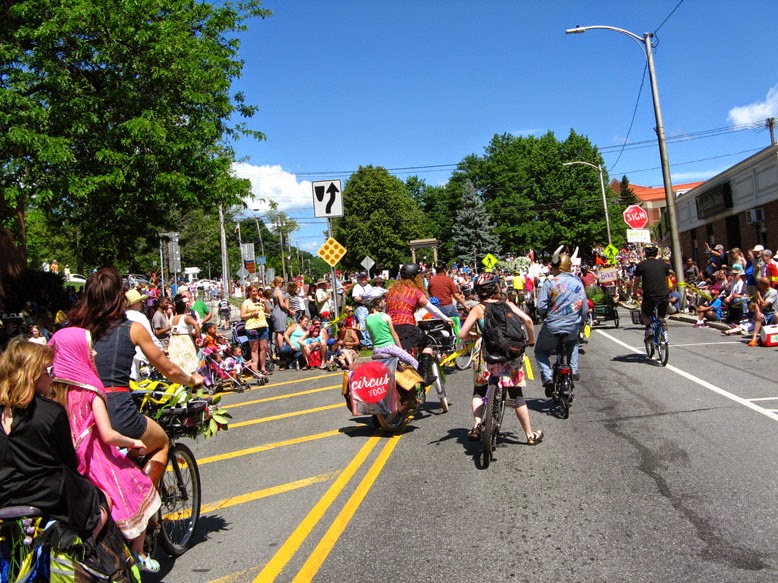 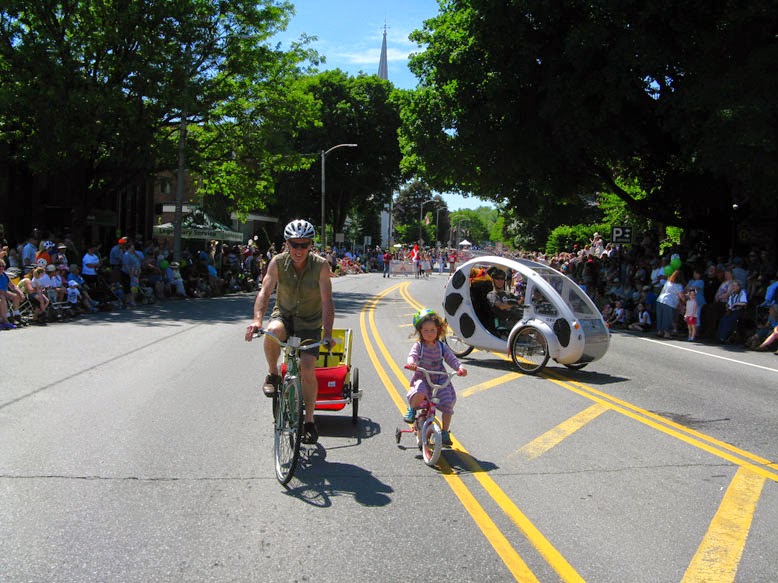 Sometimes you don't want Dad's help, you just want to peddle yourself.
She actually rode the whole parade! 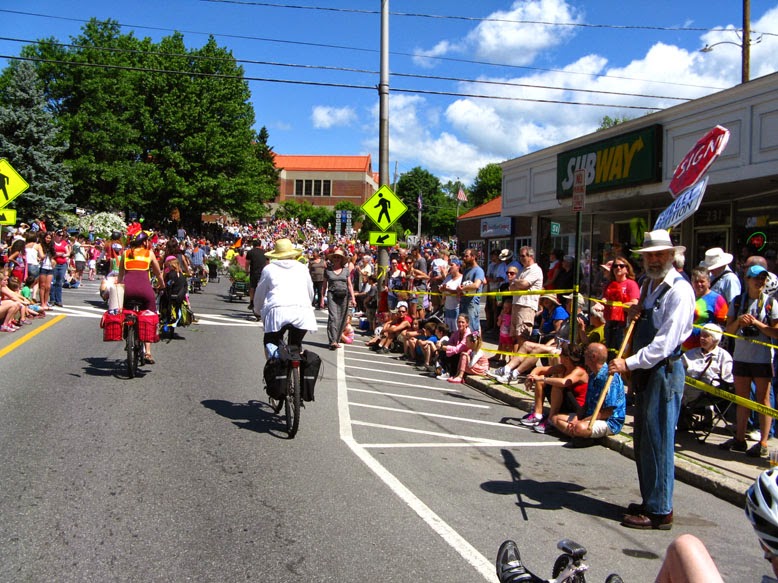 My word, the people!  It's heartening to think that most of them are in favor
of local food and agriculture, and so were probably very interested in biking too. 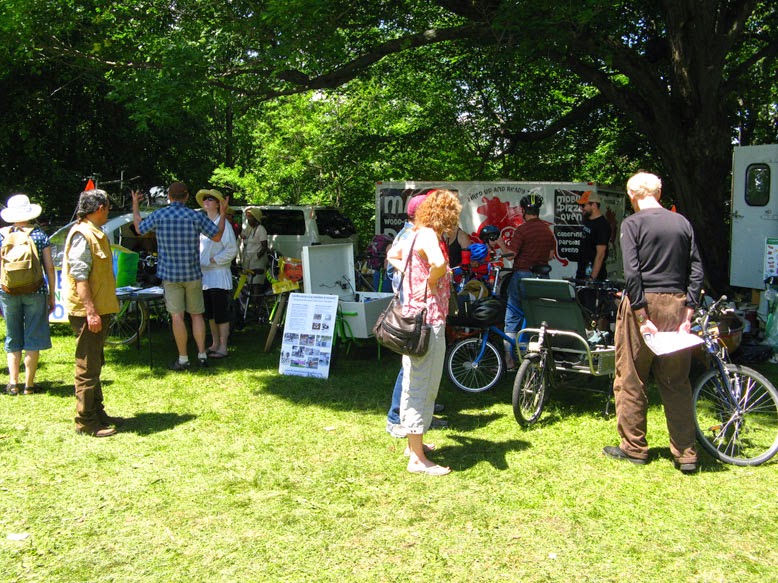 Our line up of bikes during the afternoon after the parade at the Bike Petting Zoo.  We answered all sorts of questions about our bikes.  I took a picture for a mountain biker from Virginia while he sat on the Bakfiets, and I had a great conversation with a couple from New Jersey about urban versus rural biking. 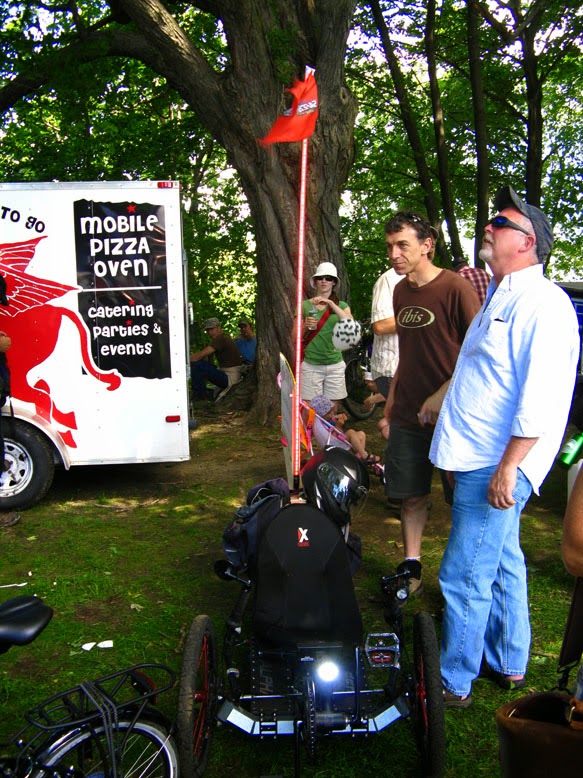