The UVEV Demo and Forum was a blast!  There were about 20 owners and 3 dealerships that had signed up, and what actually happened was a full capacity crowd. 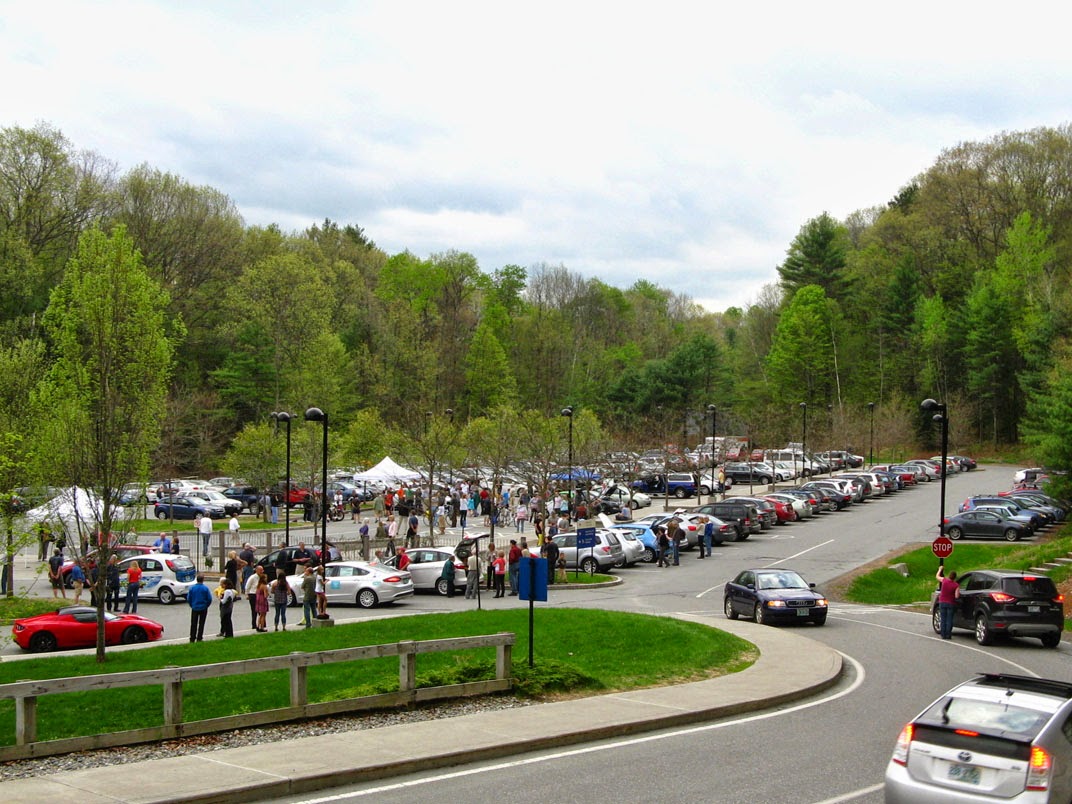 (Click on images to enlarge.)
Every spot in the parking lot was taken and then some.  We had to enlist Erin Sterner and Sarah Simonds to direct traffic (thanks for your help!)  There were about 250 people in the parking lot, networking with owners, taking test EV rides and ebike rides, a race car display and electric motorcycles, and electric vehicle builders.  It's been two weeks since the event, and I can still feel the tremendous energy from the group. 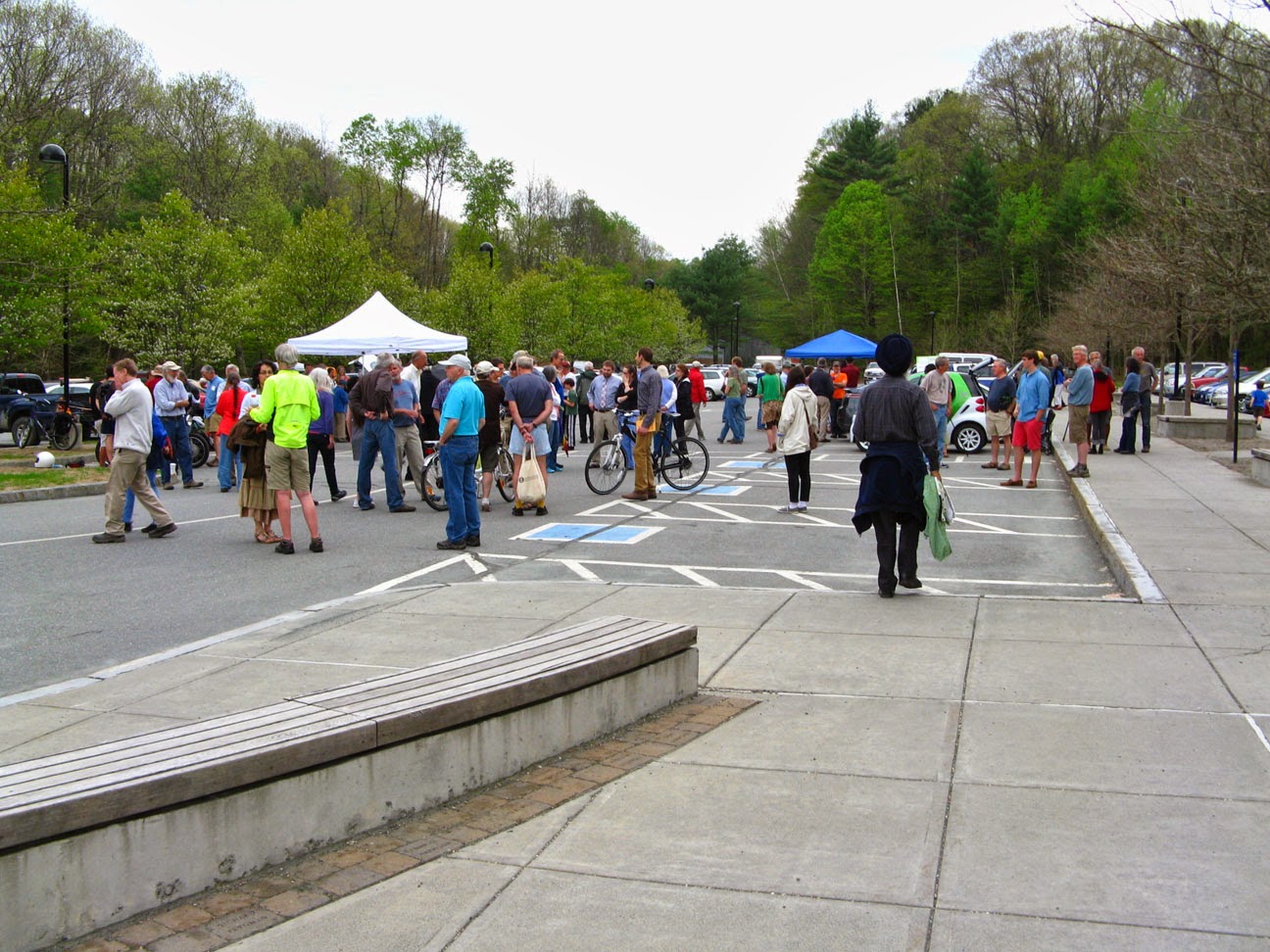 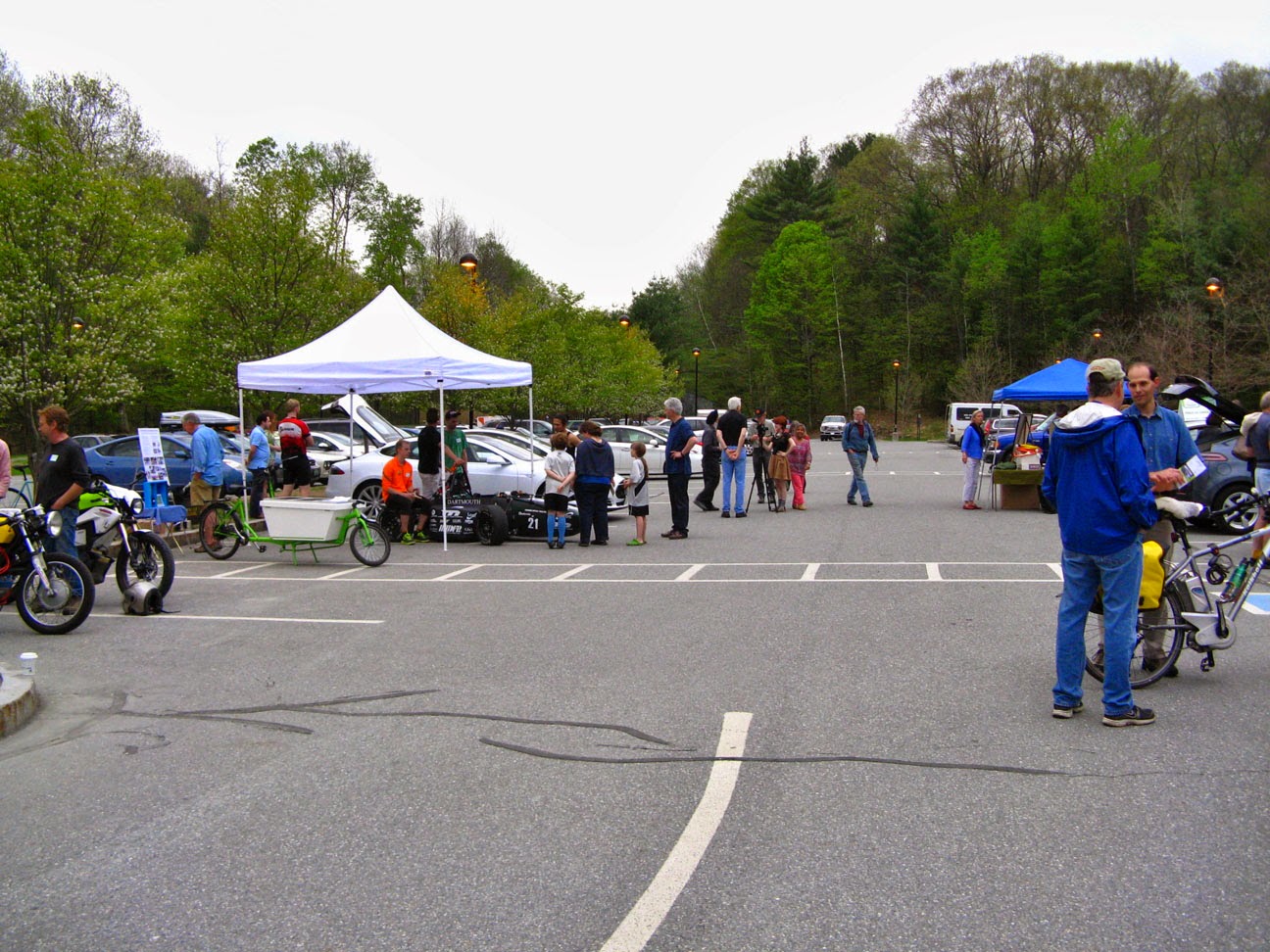 Later in the evening when the crowd had gone inside for the presentation, I took this photo looking down the center row.  On the left were two electric Motorcycles, my Solar Electric Cargo Bike, the Dartmouth Formula race car, and a Tesla.  On the right were Zoombikes eBikes, a private owner eBike, a Smart EV and a Volt, a modified Prius from Randy Bryan with a larger battery pack and 120 volt power generator (see http://www.converdant.biz/ for more info), and a modified Ford Ranger pickup truck with a hybrid electric drive designed and built by Margeaux Leblanc, a Dartmouth student, (for more info see her website:
http://ampedupranger.wordpress.com/ ) 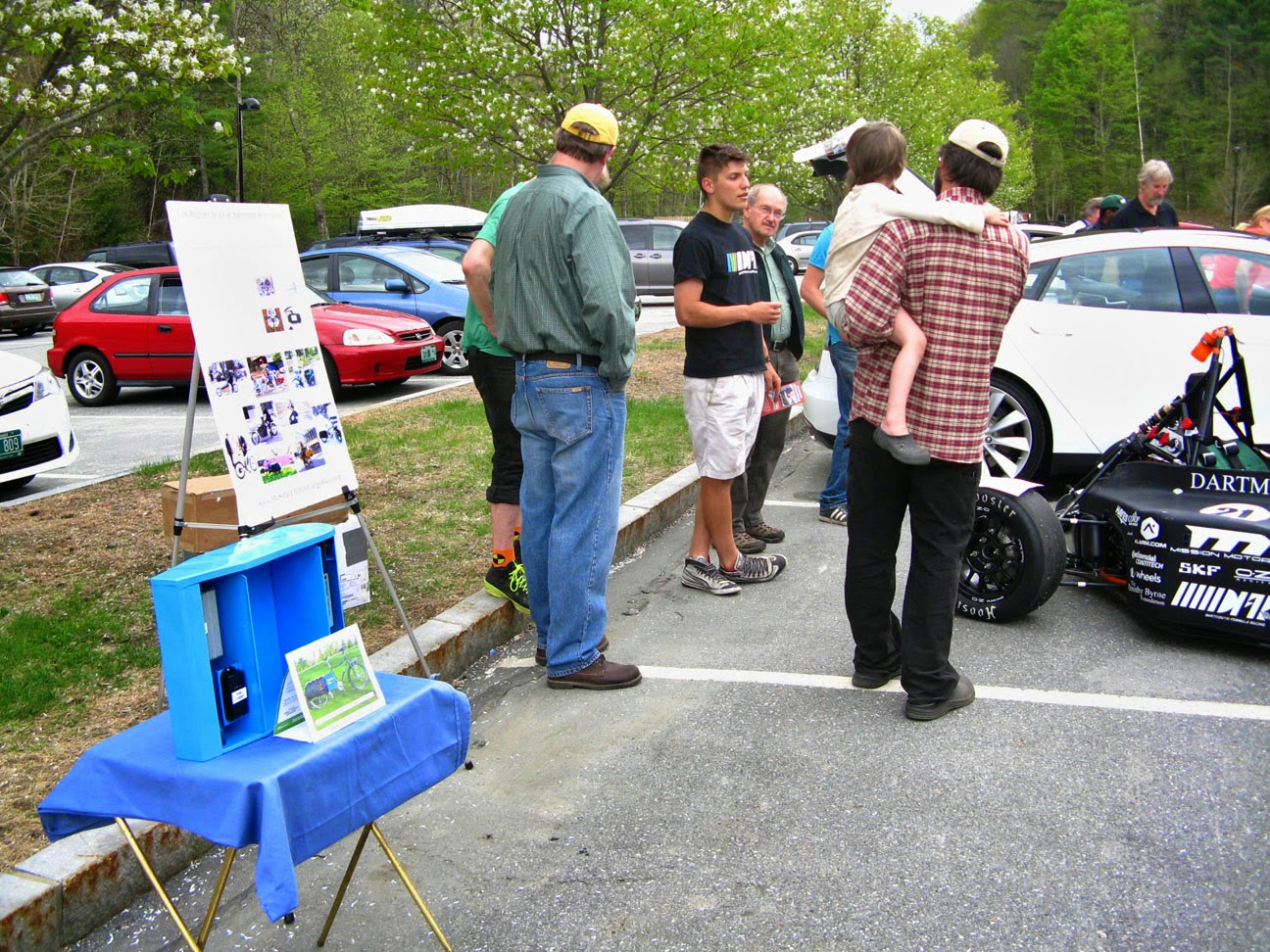 My display was the bike, (which was out for a test ride in this photo), the new battery box for the next bike with an explanation of the modules inside it, and a poster explaining the use of electric Cargo Bikes as a car substitute.  The person in the green shirt is Keith Dewey, who drove his SmartEV up from Londonderry, a one way distance of 65 miles, and had 40% of battery range left. He recharged his car at the King Arthur Flour public charging station before heading back. 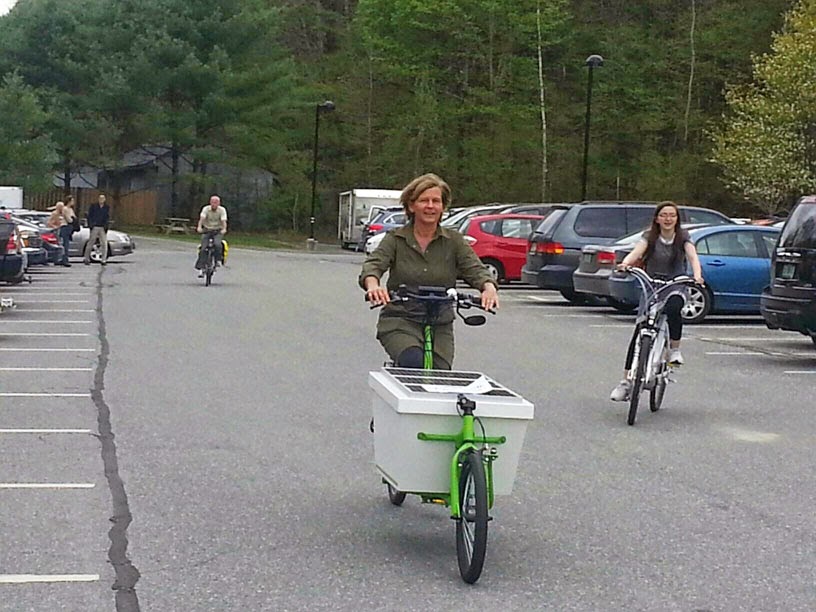 The eBikes were constantly in motion.  In the distant left is a private owner mid motor eBike, the center is my solar electric cargo bike, and on the right is one of the Evelo bikes that Larry Gilbert of Zoombikes (www.zoombikes.net) brought.   At one point I had the chance to ride up the access road hill on the cargo bike side by side with an Evelo, and the cargo bike was much faster.  The 500 watt motor was stronger than the Evelo motor, however it also turned out that many people preferred the Evelo regular frame style for commuting rather than the bakfiets frame with the extra cargo box.  All I could do was point at the battery box and tell them about the upcoming longtail.... 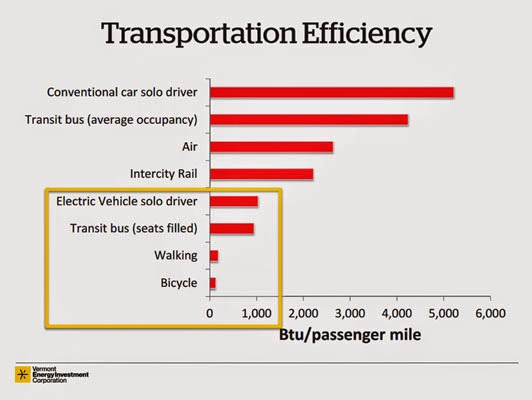 Since this is a blog about bikes, I would like to emphasize a point that I think almost everyone at the event did not fully appreciate.  This graph is the 4'th slide from the evening's presentation- notice the energy use of bikes.  Electric cars are a big improvement over gas cars, but a bike is another order of magnitude better.  This can be seen in my records from last summer's energy use for the solar electric cargo bike of 13.2 watt hours per mile, which is equivalent to 2553 mpg.  Some weather protection and racks can be added to a bike for utility use, and it will still be far better than any other mode of transportation.  We need to question our belief that it is necessary to have 3,000 or 4,000 pounds of metal around us to get us down the road.  Or, to quote Thoreau speaking in a time before there were cars- "How many a poor immortal soul have I met well nigh crushed and smothered under it's load, creeping down the road of life, pushing before it a barn seventy-five feet by forty, it's Augean stables never cleansed, and the labor of one hundred acres of land, tillage, mowing, pasture, and woodlot."  Now the best way to reach Walden pond is by car via a large highway.  Even back in the 1940's my mother used to drive out to the beach there with her teenage friends from South Boston.

There were 12 test rides (bringing the total to about 100) on the bakfiets before heading in for the presentation: 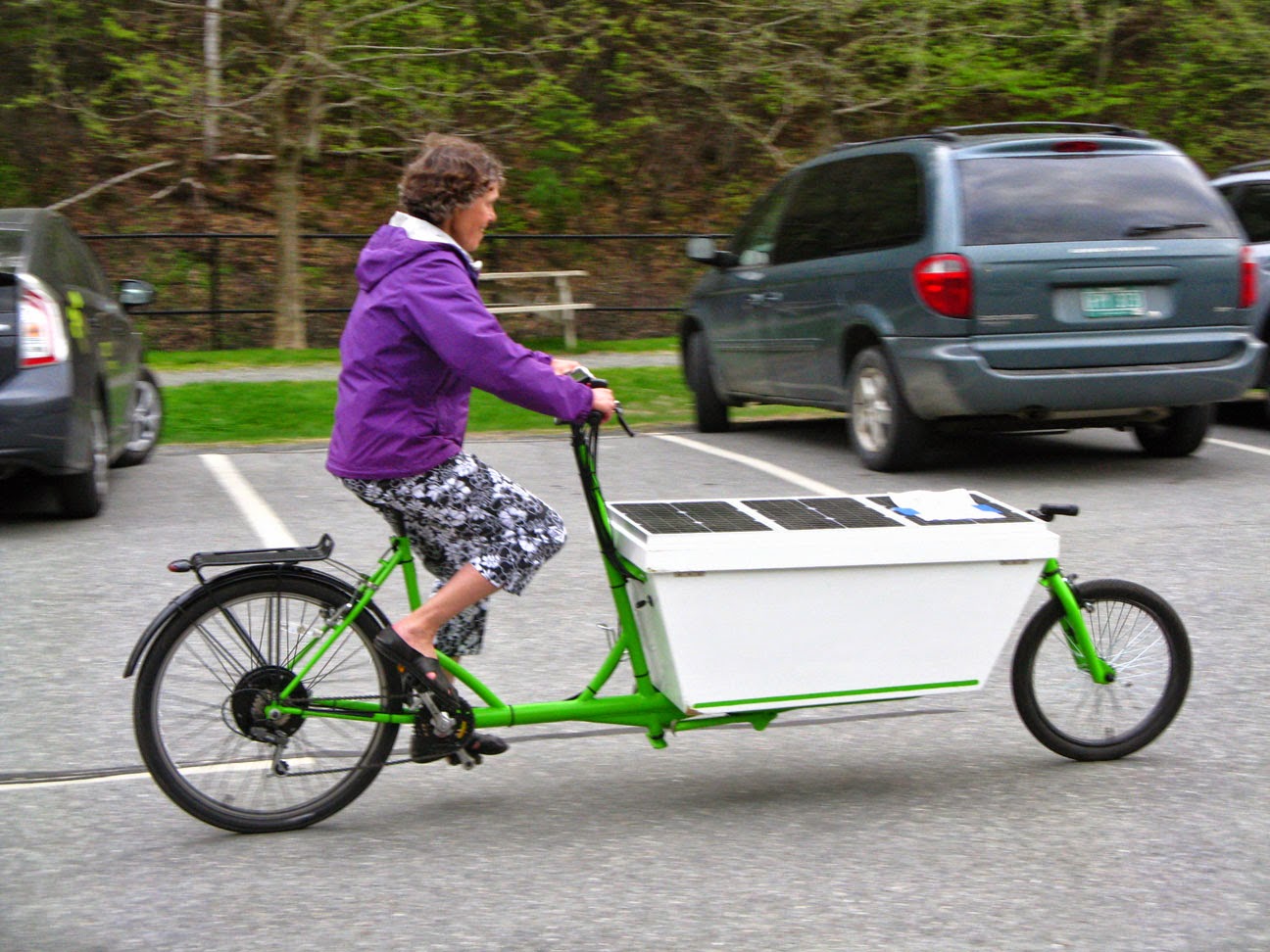 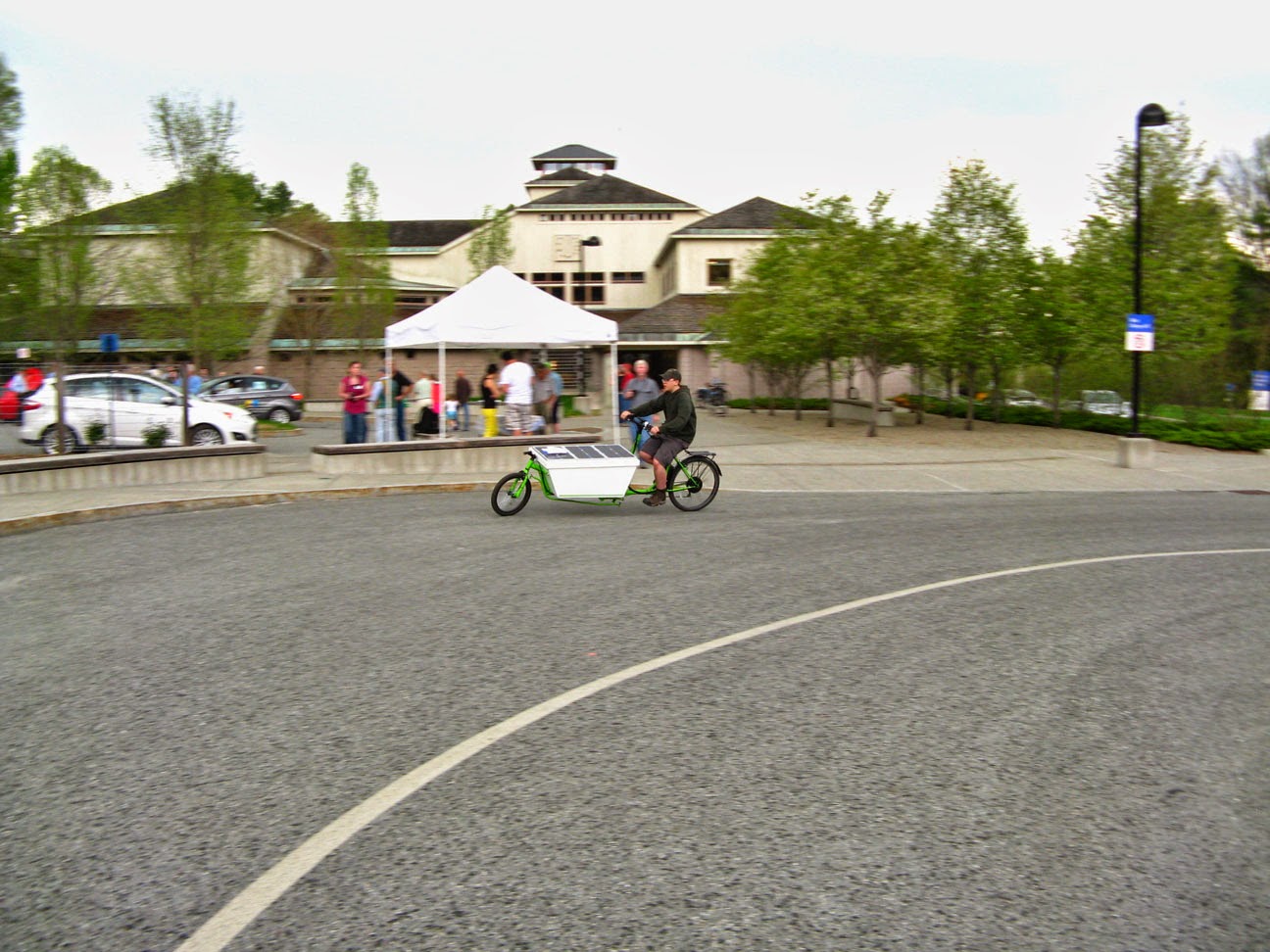 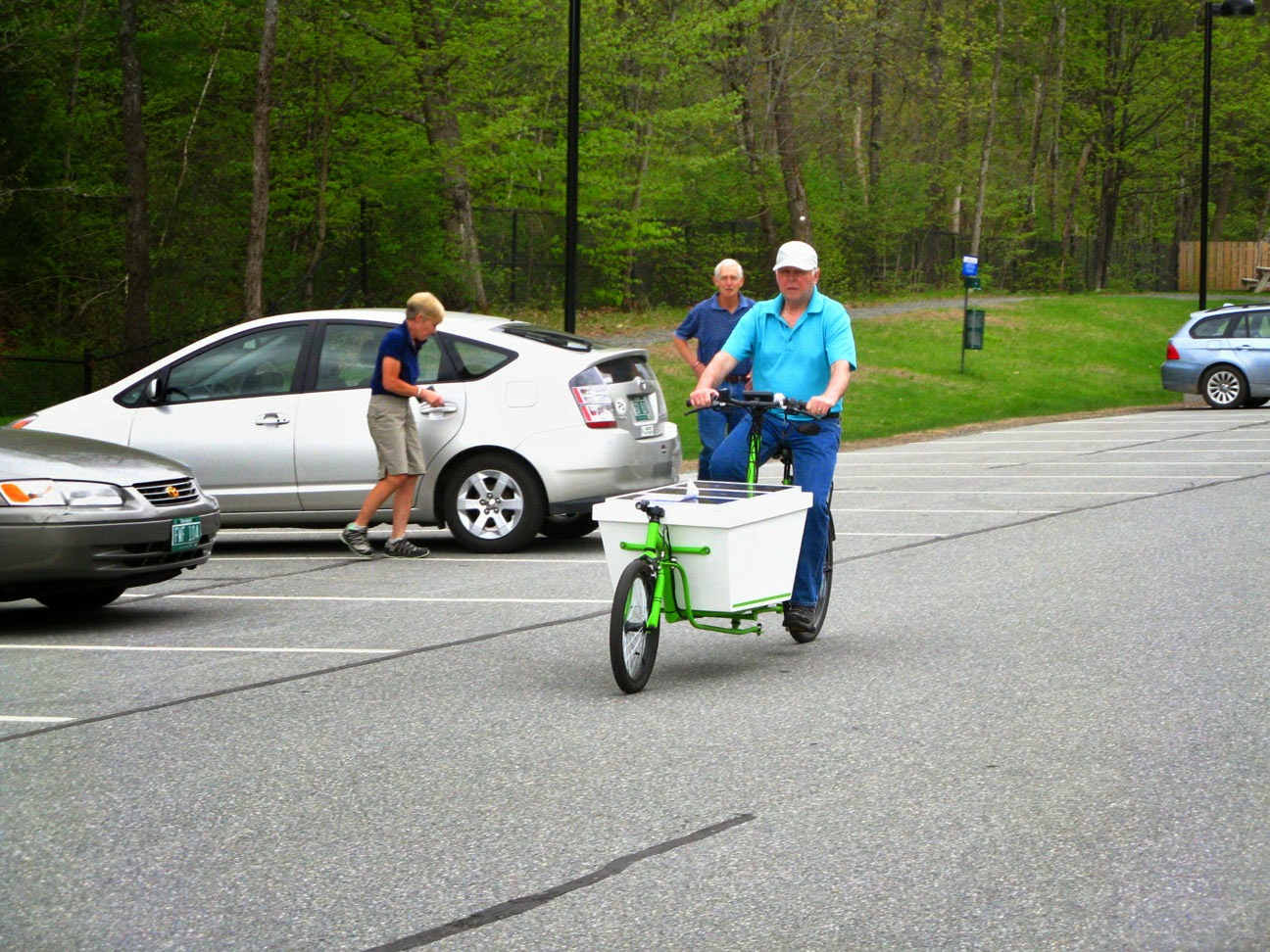 Some people just cruised along.

I have to confess there were two accidents with the bakfiets.  A friend of mine was riding around the curve near the display, and fell down.  After making sure she was OK, I got on the bike to try to figure out what was wrong (because I had never fallen down on it), and I fell down.  It turned out that a brief shower had moistened the pavement, and for several feet on the curve there was something like silicone on the road that became slippery.  After 10 minutes it had dried out enough to be normal traction again.  This was more than strange, as I'd ridden the bakfiets in light to pouring rain before, and even last winter on frozen roads with snow and ice, where the only problem had been spinning the rear tire if I pedaled hard while the motor was on.  (Studded tires could have helped.)  Traction has been superb.  I can now say the mode of falling for a bakfiets is a roll onto the side, and the damage is scuffing up the back corner of the box.  My friend ended up laying on her side, I stopped on my back, and then we both stood up and looked at the bike.

When my sister heard about the falls, she told me that I should build tricycles, and that she would not put her granddaughter Maddy in my bakfiets (even though Maddy would be protected inside the box).  This actually made me feel better about my plans for building the next two bikes as two wheelers, because sometimes when my sister tells me to do something, it's turned out better if I don't.  I've got some educating to do here- I don't think she understands that the severity of a crash is directly related to the speed, and thinks a bicycle crash is the same as a car crash.  However I will say that there are better places to fall than in front of a couple hundred people at an event you organized to show how good electric vehicles are. 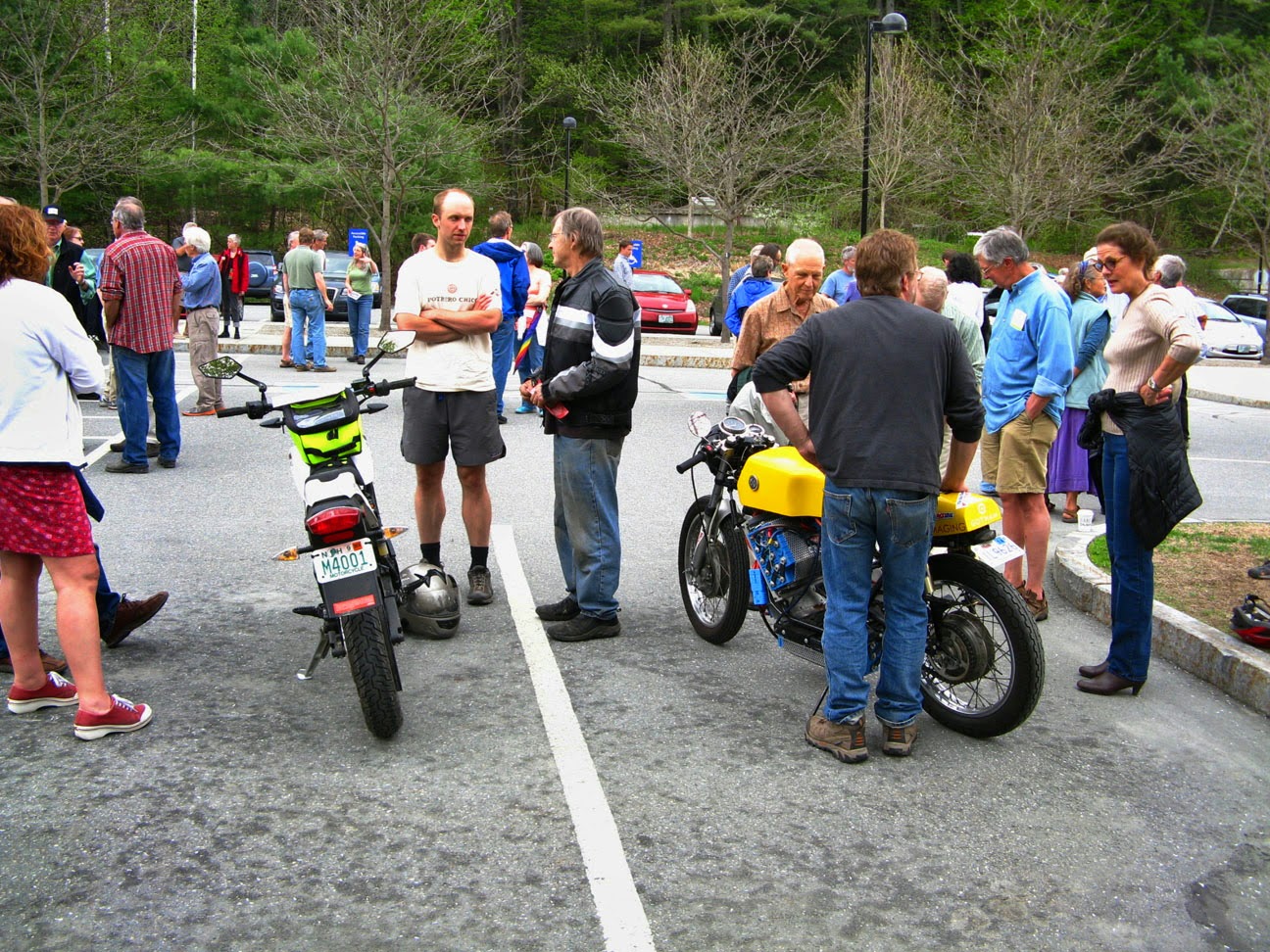 On the left is Bill Cable with his Zero electric motorcycle, and the right is Ted Dillard with his modified Yamaha electric R5.  Ted is the organizer for the Mount Washington ALT Energy Summit, with many types of electric vehicles climbing to the top.  More information on this year's September summit can be found at: http://altenergysummit.org/ 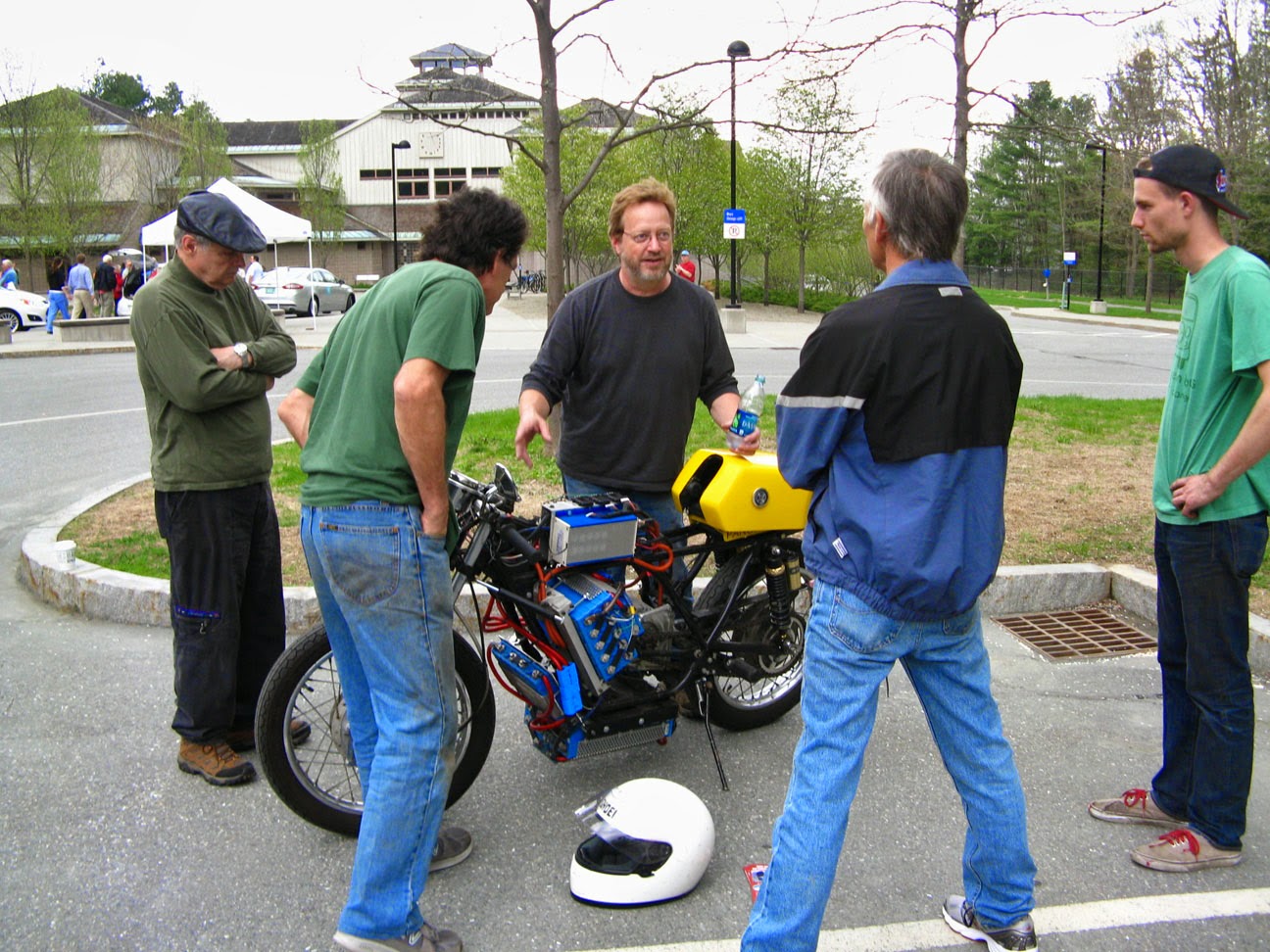 The "gas tank" is a hollow shell covering controllers and batteries. 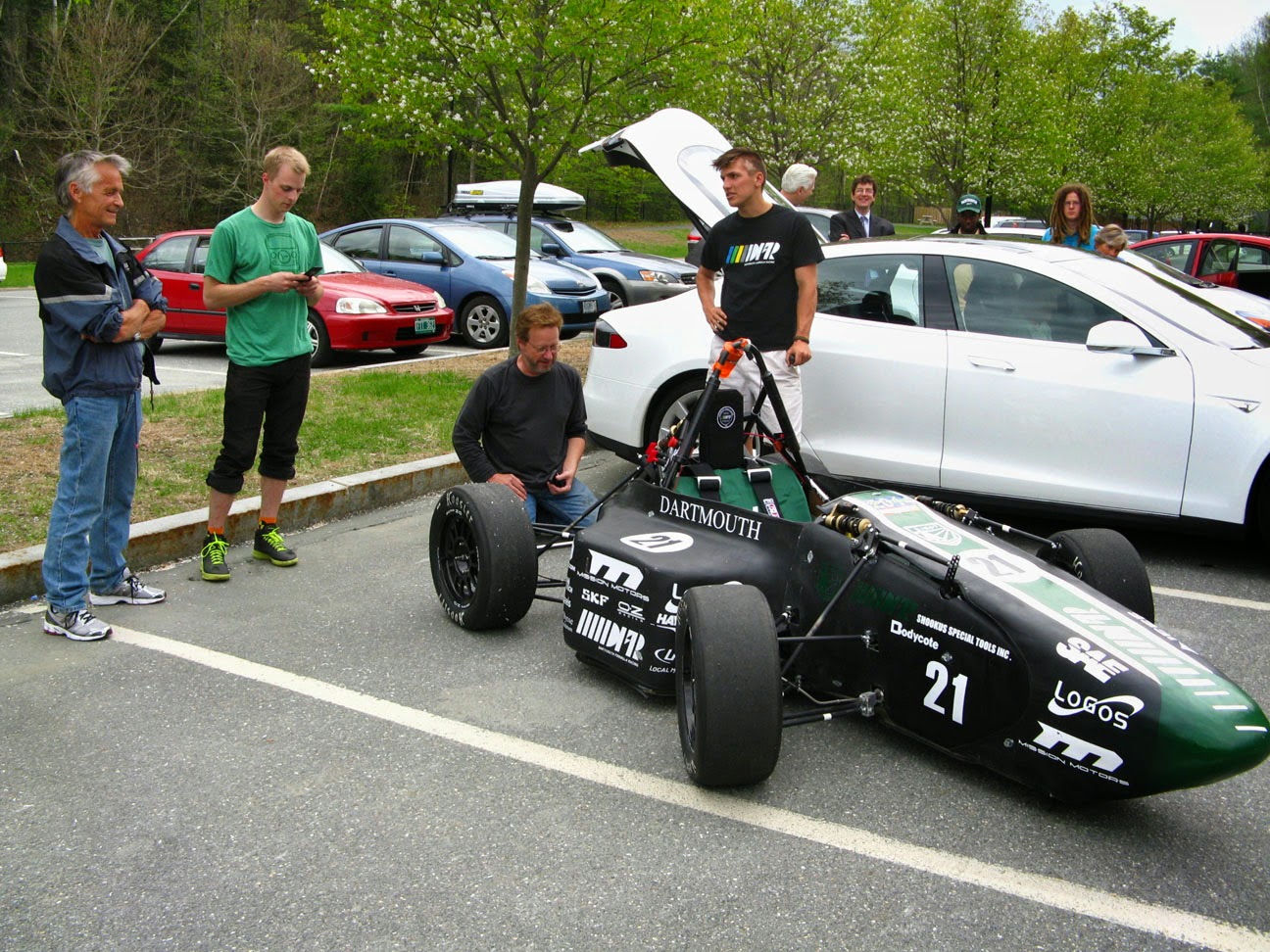 Arthur Bledsoe and Eric Din show the drive system on the Dartmouth Formula Race car to Ted Dillard.  (The white car in the background is a Tesla that drove down from Burlington.)  The students drove the car for 3 parade laps around the parking lot.  Dartmouth has just won the Formula Hybrid Competition held by the Formula Society of Automotive Engineers (FSAE) for the second year in a row, you can find out more at:
www.facebook.com/dartmouthformularacing
www.dartmouth.edu/~dfr 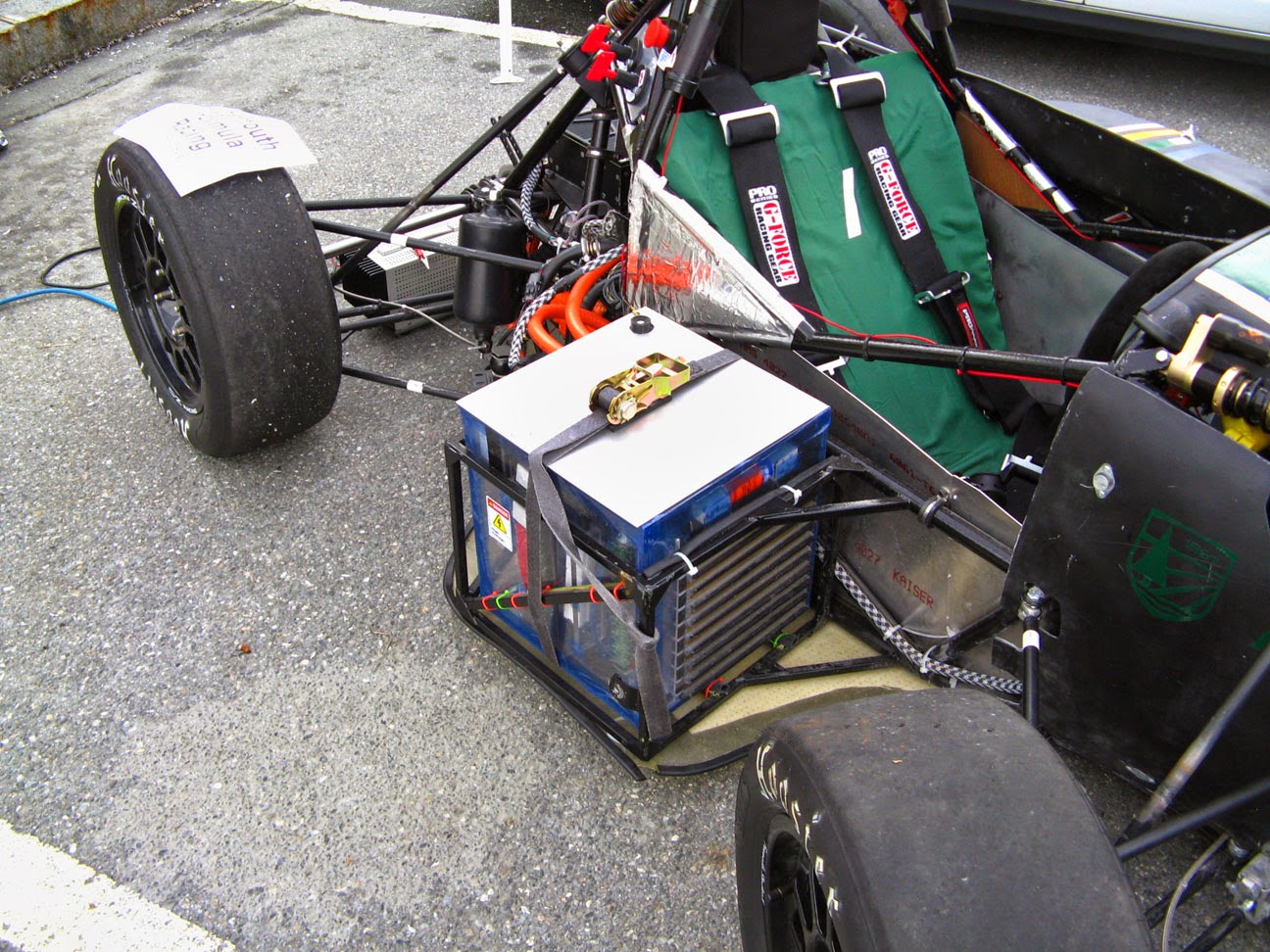 The DFR car was packing a lot more battery than my bike (this is one side). 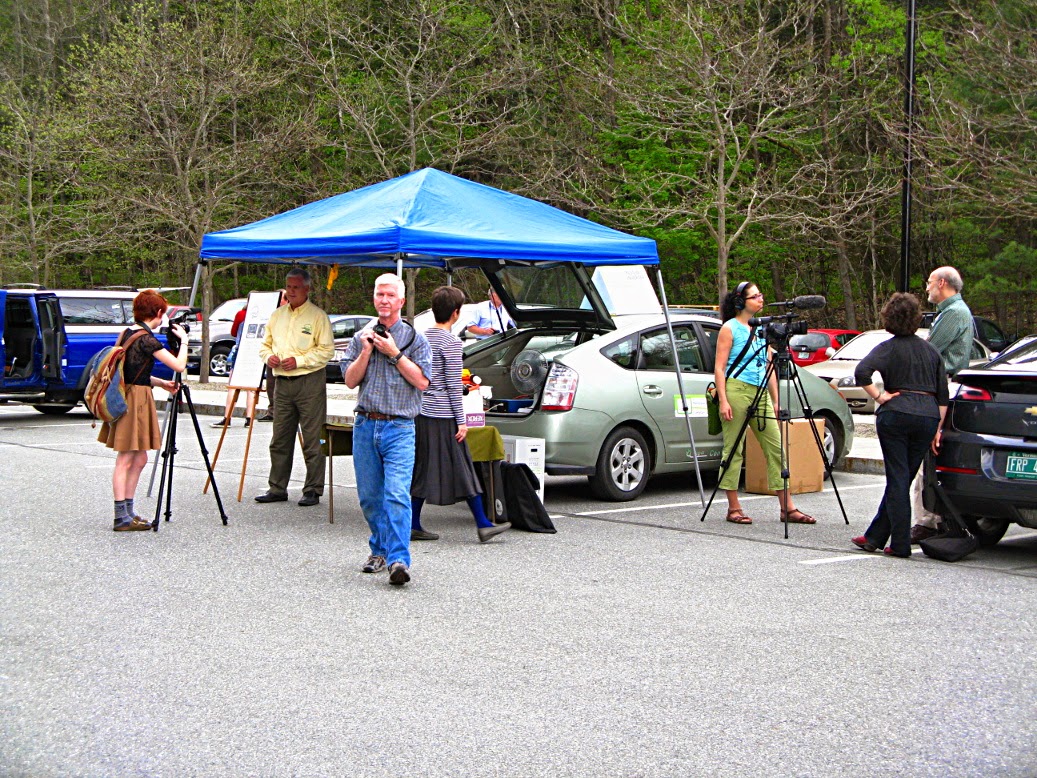 The event was well documented.  Briana Spangler filmed for WRJ CATV (video at http://vimeo.com/98371368), and Eva Sollberger (usually from Seven Days) and Wendy McArdle filmed interviews of car owners for the VT Energy Action Network (http://eanvt.org/).  Several photographers were also taking pictures, including Sarah Priestap and Maggie Cassidy for the Valley News.  You can read their coverage at Event Introduces Area Drivers to Electric Vehicles, and also a supplement they wrote about charging stations and a little about my bike at Ready, Set, Charge: Maps of Electric Vehicle Charging Stations.  In addition, there were interviews on Royalton Radio's GreenZine and Mark Johnson's show on WDEV in Waterbury, and a mention on Vermont Public Radio.  The VPR story is at http://digital.vpr.net/post/electric-cars-draw-attention-and-riders-rally 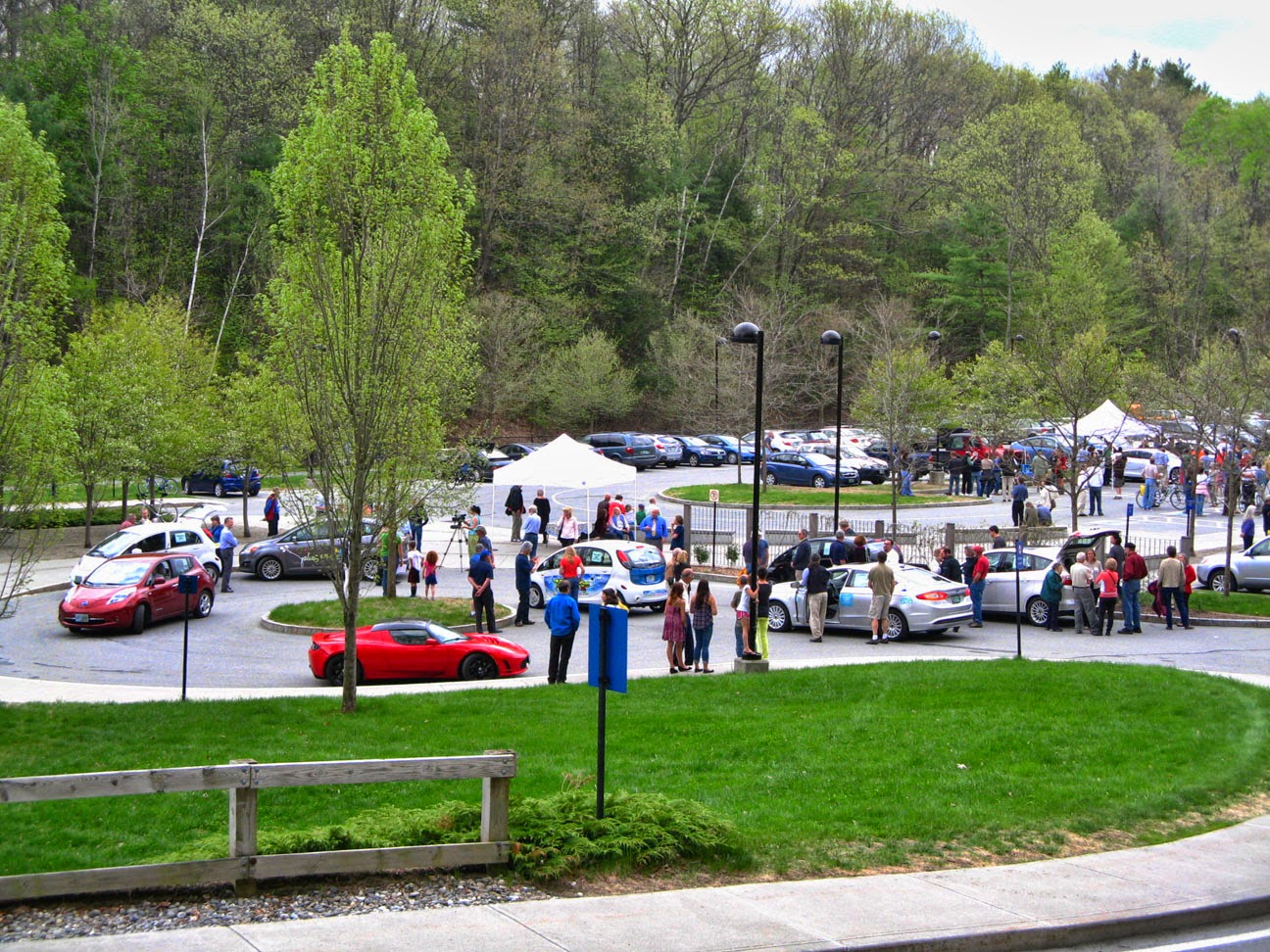 Many more EV's were lined up around the circle at the entrance, with the owners offering rides around  a 3.8 mile loop along the Connecticut river and up into Norwich, or 2.4 miles over to the charging station at King Arthur Flour. 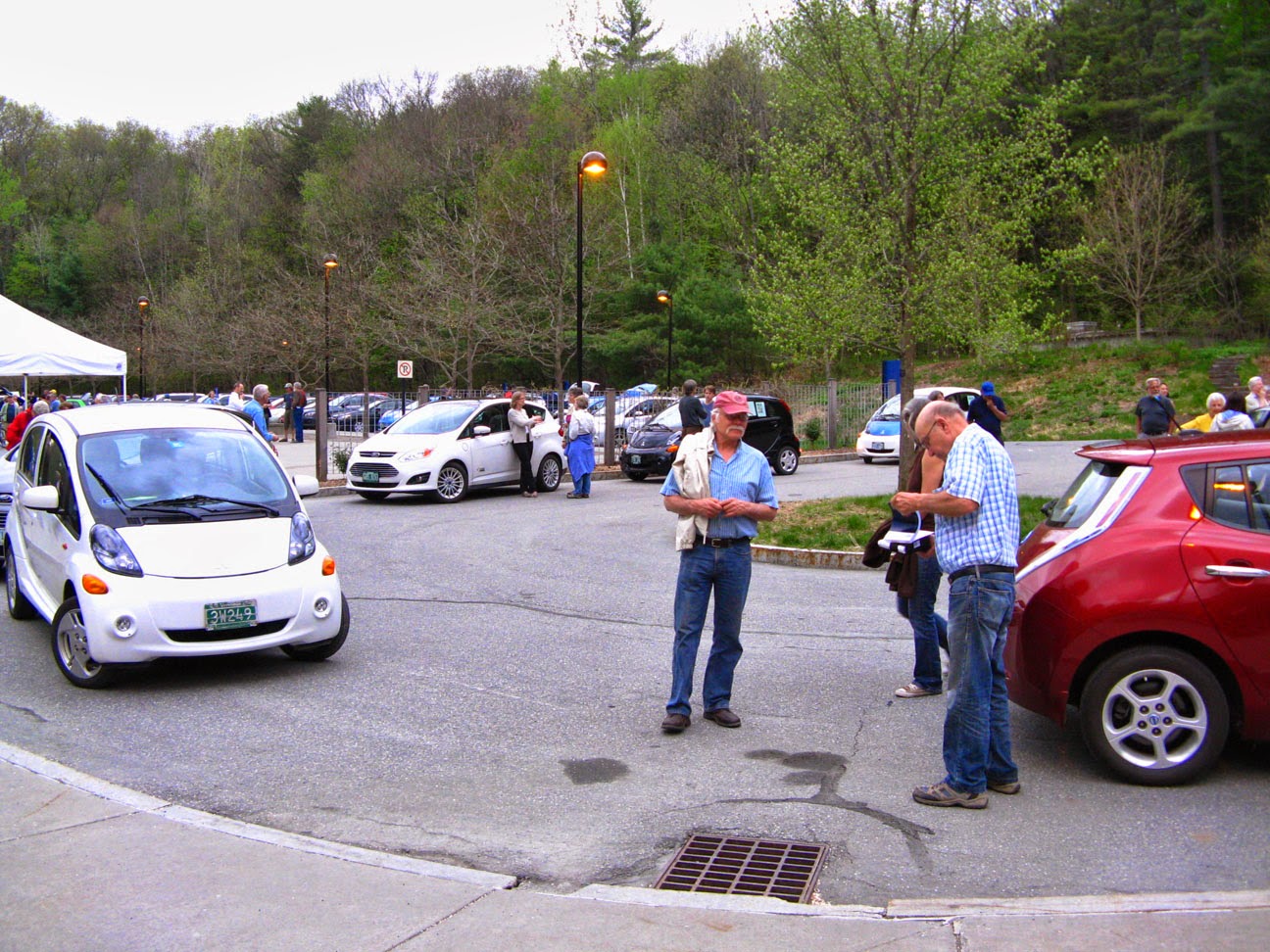 Various Nissan Leafs, Mitsubishi I-MiEVs, Teslas, and Ford Focus and C Max's lined up at the test ride circle.  A frequent comment was how quiet the cars were, as drivers waited for pedestrians to notice there was a car waiting to pull out.  This photo was taken during the presentation, the rides continued on through it, which was not planned. 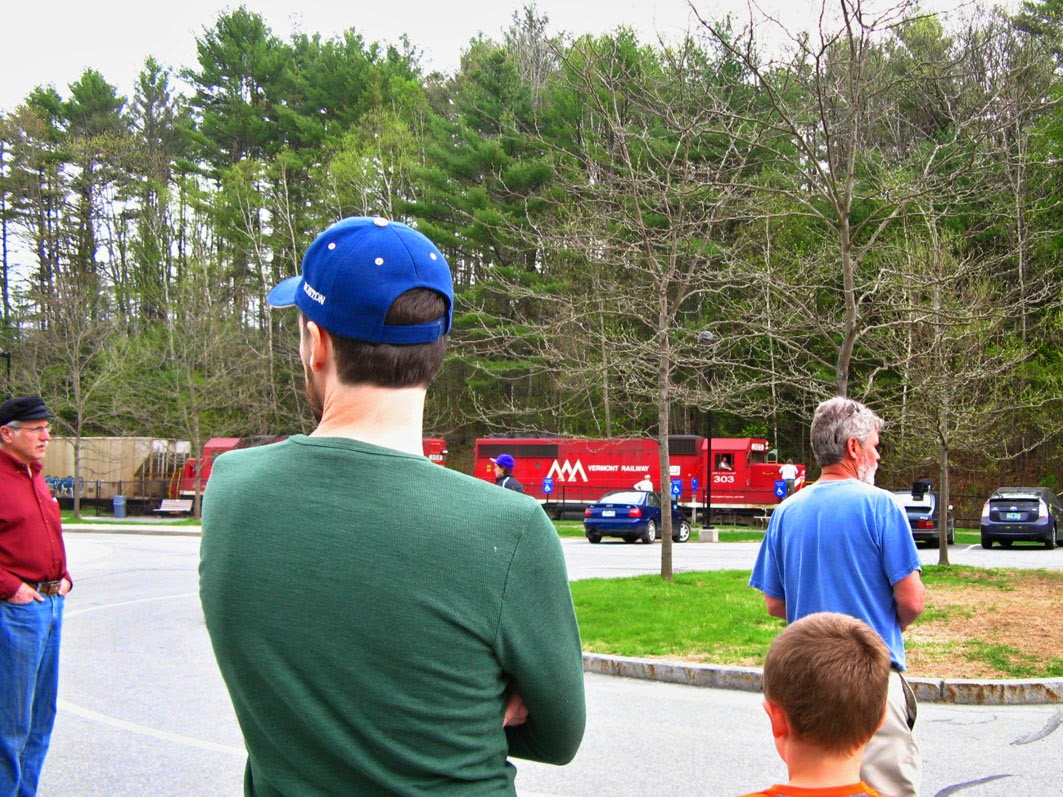 Almost as if it were part of the event, a Vermont Railways train rolled through on the track between the museum and the river.  Larry Gilberts of Zoombikes (http://www.zoombikes.net/) in the blue shirt is watching test riders on some Evelo electric bikes that he brought to the event. 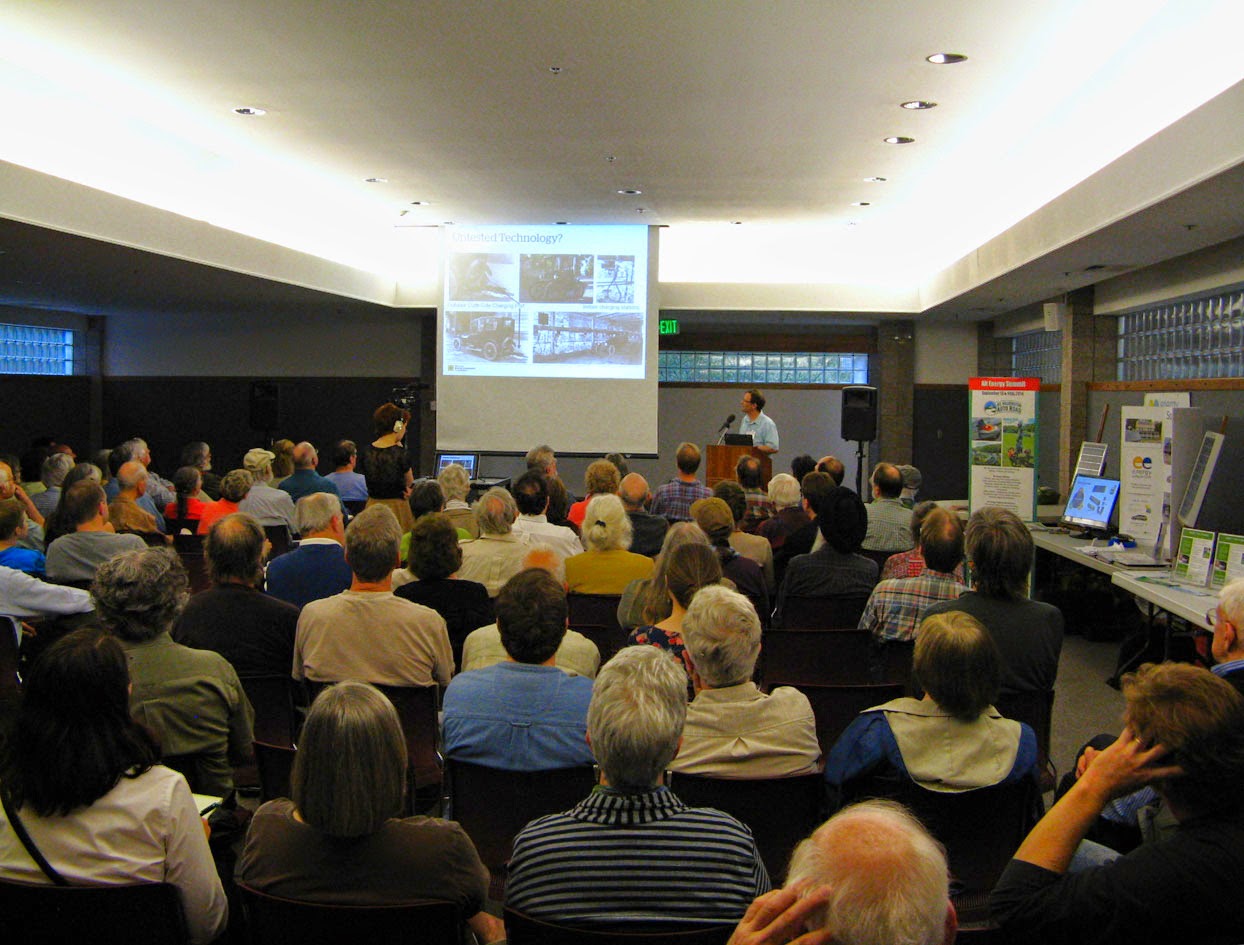 Dave Roberts of Drive Electric Vermont (http://www.driveelectricvt.com/) gave the Forum presentation to about 150 people.  Drive Electric Vermont has been given the task of promoting and coordinating EV development in the state, and they have a lot of resources available on their website- they are the ones to speak with if you are a car owner with questions, or a business who wishes to install a public charging station.  (The slides from Dave's presentation can be downloaded here.)  Along the right side of the room were displays from the Mount Washington ALT Energy Summit, charging your EV with a solar array (from Enfield Energy Emporium), Drive Electric VT info, the other UVEV forum co-organizer Sustainable Energy Resource Group, and on the left were ChargePoint public charging stations and Voltrek (www.voltrek.com), Lamoille Valley and St J. Ford, Solar Fest, and my group- the Upper Valley Sierra Club.  In the last few years the national Sierra Club organization has become more proactive, and now has programs promoting both renewable energy and electric vehicles.  Their EV events organizing info page is at https://driveelectricweek.org/resources.php.

My role in this event was easy, as I had talked to many of the participants last summer while I was out with the solar electric cargo bike and simply needed to pull everyone together for an event.  I'd like to thank Bob Walker of SERG for helping with the logistics, and the Montshire museum for cosponsoring, but the people that I think deserve most of the credit for how well this event turned out are the car owners: 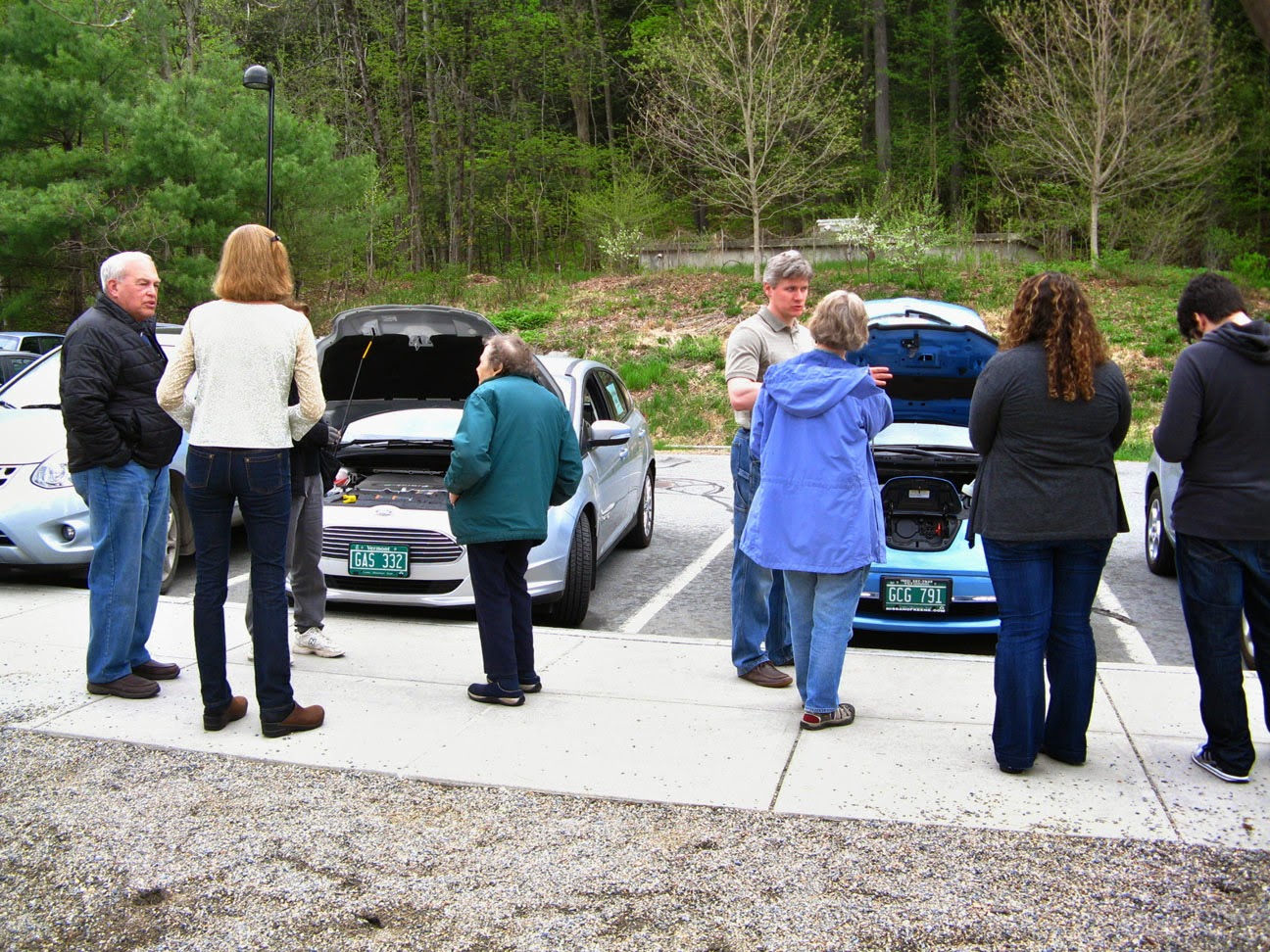 Julie Mullen with her Ford Fusion, and Alan Johnson with his Nissan Leaf,
each talking with several people about their cars.  Multiply this enthusiasm
by a couple dozen owners, and repeat several times during the evening.

One step towards bike infrastructure and Electric Vehicles for a more sustainable transportation system.  I'd like to end with a song that Alan and his kids sing while riding in their Leaf: