Up to about jogging speed, (6 to 8 mph), power loss on a bike is for practical purposes about equal from mechanical, tire, and air drag.  Above that speed air drag rapidly becomes dominant, and since I wish to travel quickly over a longer distance between towns, it becomes a main consideration for the design of the third solar cargo bike.  Having a slippery shape (low Coefficient of drag), and a small frontal area (pushing less air around), are the most practical ways to reduce energy use, increase speed, and extend battery range in the forward direction, and increase stability and safety in crosswinds.  I'm working through the compromises between a very efficient shape, and ease of use.

The most important concept for air drag is the swirling air left after the bicycle passes by: 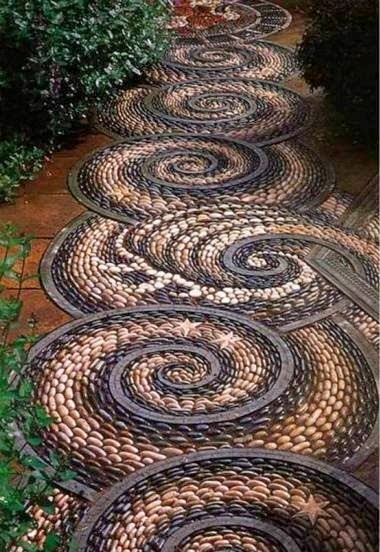 If something is pushed along through the air and the air flows around it smoothly and leaves still air behind it, (imagine a canoe coasting through water), it uses much less energy than if the air flow is broken up and swirling air is left behind (imagine a barge with eddies behind it in the water).

Still water in wake of a canoe, in laminar flow the water doesn't mix around.
Diagram credit: www.Avalanche-Center.org

It takes energy to make the air swirl, and you can think of the swirling eddies as energy left behind and wasted:

I'm going to ignore the Reynolds number concept here, because most bicycle aerodynamics are so lumpy, (like the turbulent example), that you are guaranteed to get eddies.  We don't need to predict them, just to reduce them.  I'm also going to assume this is for solo biking and ignore drafting. 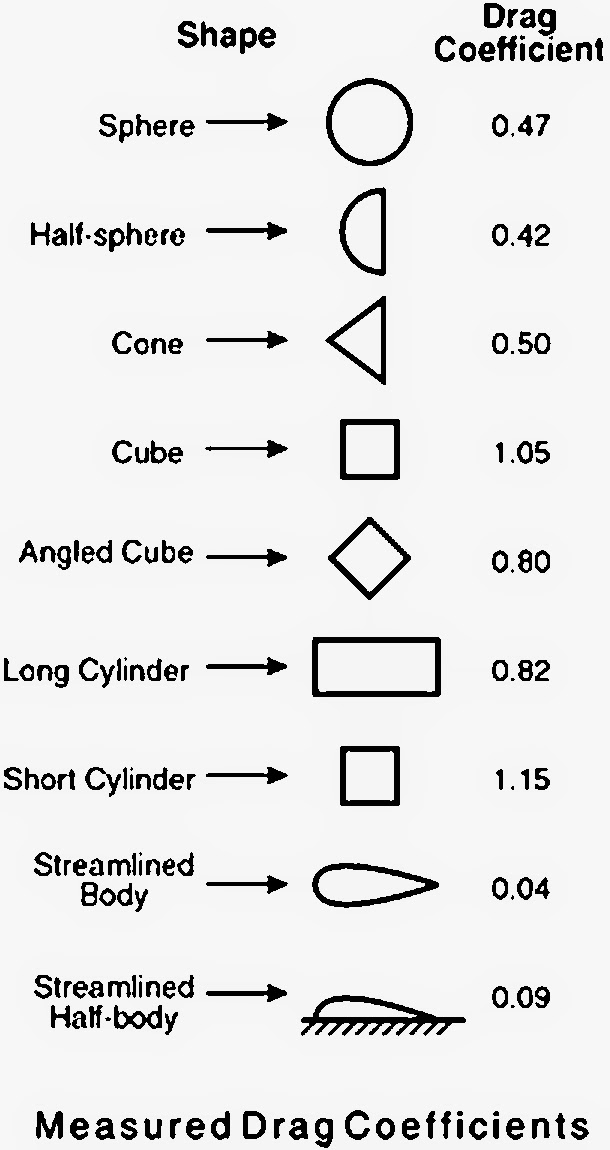 Drag Coefficients for various generic shapes.
Air is flowing at them from the left.  A smaller number is less drag.
Notice the half sphere has less drag than the whole sphere.
Diagram credit:  TheOtherJesse, http://en.wikipedia.org/wiki/Drag_coefficient

A vehicle's frontal area at the leading edge of any bodywork would start at nothing, increase to a maximum to make room for me inside, and then decrease back to zero.  Because the air in the front is under pressure, it is possible to use a variety of smooth rounded shapes and the air flow will stay laminar.  A round sphere works well in front on airplanes and submarines, but on the road you don't want to push air underneath the vehicle (it causes weird handling and extra drag), so the shape ends up looking more like a person's chin (similar to the Streamlined Half-body on the chart above).  The problem location is when the body shape has reached it's maximum area and starts decreasing, causing the air pressure to drop: 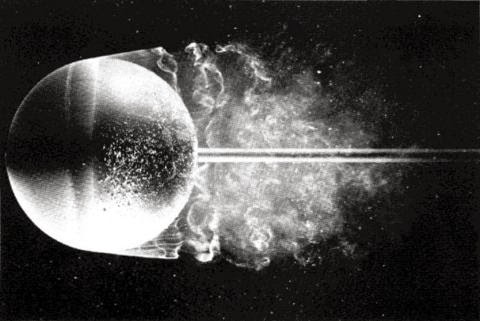 Surrounding air pressure has to press the air flow back against the decreasing body shape for it to stay laminar.  If it doesn't, a vacuum forms, and turbulent air swirls in to fill it.  One way around this is with a long gradual taper- the classic teardrop aerodynamic shape:

Back in 1969 Porsche built a Grand Prix race car for the 24 hours of Le Mans that had a smooth horizontally tapered tail to reduce drag:

Porsche had historically run small engines (their 356 series was related to the Volkswagen Beetle), and they needed aerodynamics and handling to make up for other manufacturer's larger engines. However this particular shape is very much like an airplane wing, and at speed it has a large amount of lift (i.e. starts to fly).  While this is good for tire wear, the drivers did not like not being able to steer, and in fact one driver died in a crash.  This flying problem is present in any vehicle that has a rounded upper body and a flat bottom, making it into the basic shape of a wing.  This lift happens not just with forward movement, but also with crosswinds. Production cars can have a ridge or a reverse camber in the hood, or square cornered fenders to break up the airflow and reduce this effect (but square corners on the front will cause a lot of drag).  Average cars have enough weight per surface area to lessen being pushed around, but a strong gust or crosswind may take a motorcycle or bike with rounded bodywork and unload the front tire (besides the sideways push), resulting in constant steering corrections.  The 917 was immediately modified with rear wings that pushed downwards: 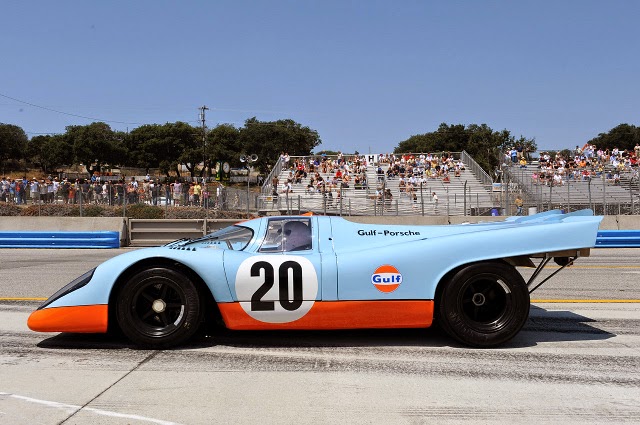 The 917K had more drag and a slower top speed than the longtail, but it illustrates a bodywork trend that was being applied to everyday cars starting about that time- the Kammback.  If you can't have a long tapered tail, the next best thing is an abrupt cutoff.  This is the rear trunk spoiler on modern cars (even minivans)- it doesn't actually push down for traction as much as it separates the air flow for reduced drag.  Air flowing around a body will try to press in towards the surface of the decreasing second half, but if it can't fill the space completely then a vacuum forms.  The vacuum is filled by turbulent air, giving a large increase in drag.  A sharp lip also ruins any hope of maintaining laminar flow, but it reduces further loss by shedding the air flow and reducing the area the suction is working on.  This is why the half sphere in the chart above has less drag than a whole sphere, and is also the same principle at work with the dimples that promote turbulence and detach the air flow on a golf ball, instead of letting it cling for another quarter of an inch. 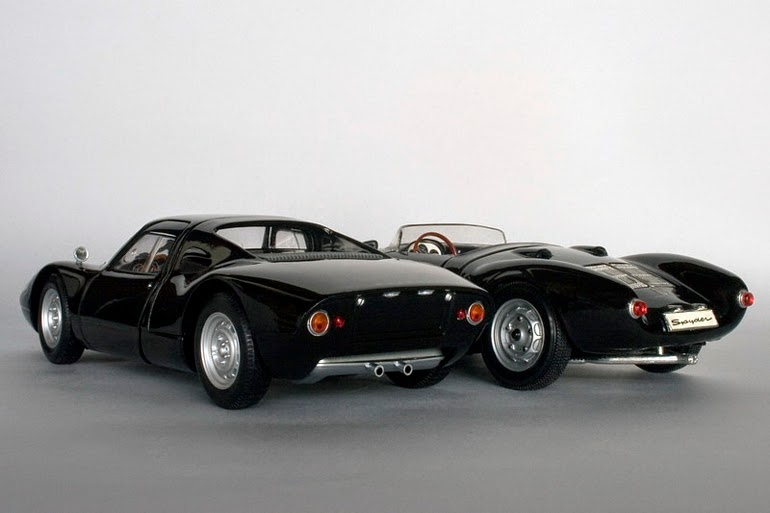 If you took the Half-Sphere in the above chart and turned it around with the flat face forward, the shape would be similar to a parachute, and the drag would be probably be closest to the Short Cylinder further down.  (A parachute has a vent which makes the airflow slightly different and increases drag even more.)   The Coefficient of drag for each generic shape relevant here is:
-Short cylinder               1.15
-Sphere                         0.47
-Half-Sphere                  0.42
-Stream lined half body  0.09
Unfortunately an upright bicycle riding position with arms, legs and head forward is probably closest to the parachute shape, and it is only acceptable because the area is small and the speed is slow.  Using the short cylinder as the worst case, then adding a spherical shape in the front would give about a 0.70 reduction in Cd, and adding a stream lined tail to that reduces Cd another 0.35.  In practice the leading edge is also more important because it is in undisturbed air (unless you are riding in traffic), whereas anything in behind is more likely to be in a turbulent airflow where streamlining is not as effective.   (The front tire aerodynamic rim matters more than the rear.)

A front bike fairing reduces drag by spreading the air flow apart in a laminar fashion over an area large enough to fit the rider in behind, but it can also reduce air drag further by cleanly shedding it's own air flow.  Often times lips are added to the top of a windscreen to aim the air flow above the rider for increased comfort, but adding something to the sides can be just as important for cleanly shedding the airflow.  This can be a small curve or lip, an extra thick section, or even molding glued on.  It is also possible to have secondary vents that feed controlled air to behind the fairing to reduce the strength of the vacuum, (air bleed ports have been tested on the trailing section of airplane wings for reducing drag and found to work, but the air supply system was too complex to be practical). 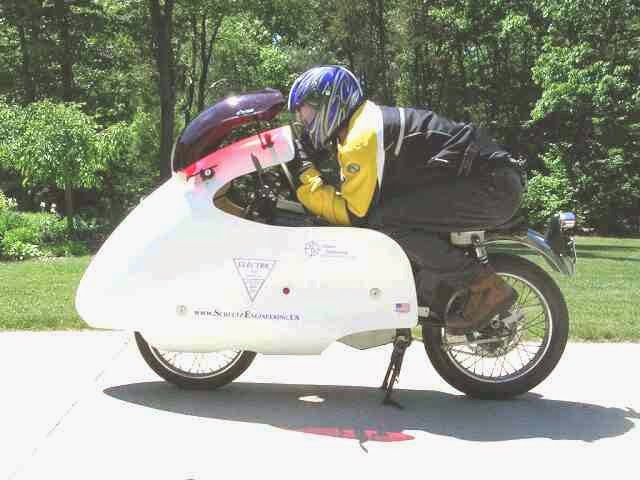 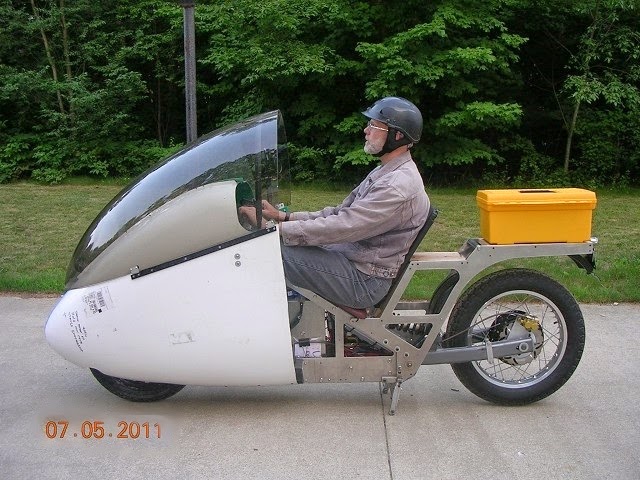 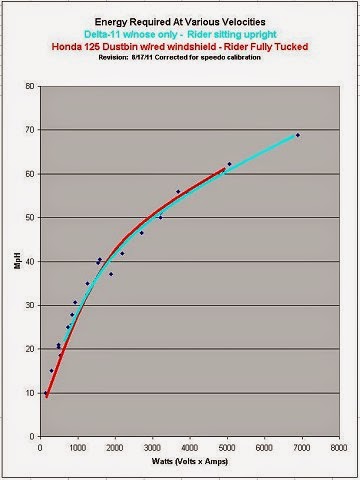 Speed vs power for the two fairings shown above on Kraig's electric motorcycle.
Red line is 2009 Dustbin fairing, Blue is 2011 upright riding position fairing.
Despite the 2011 tail having much more drag, the power use is similar.
Tails in turbulent air matter much less than front fairings.
Graph credit: Kraig Schultz, http://www.schultzengineering.us/aero.htm 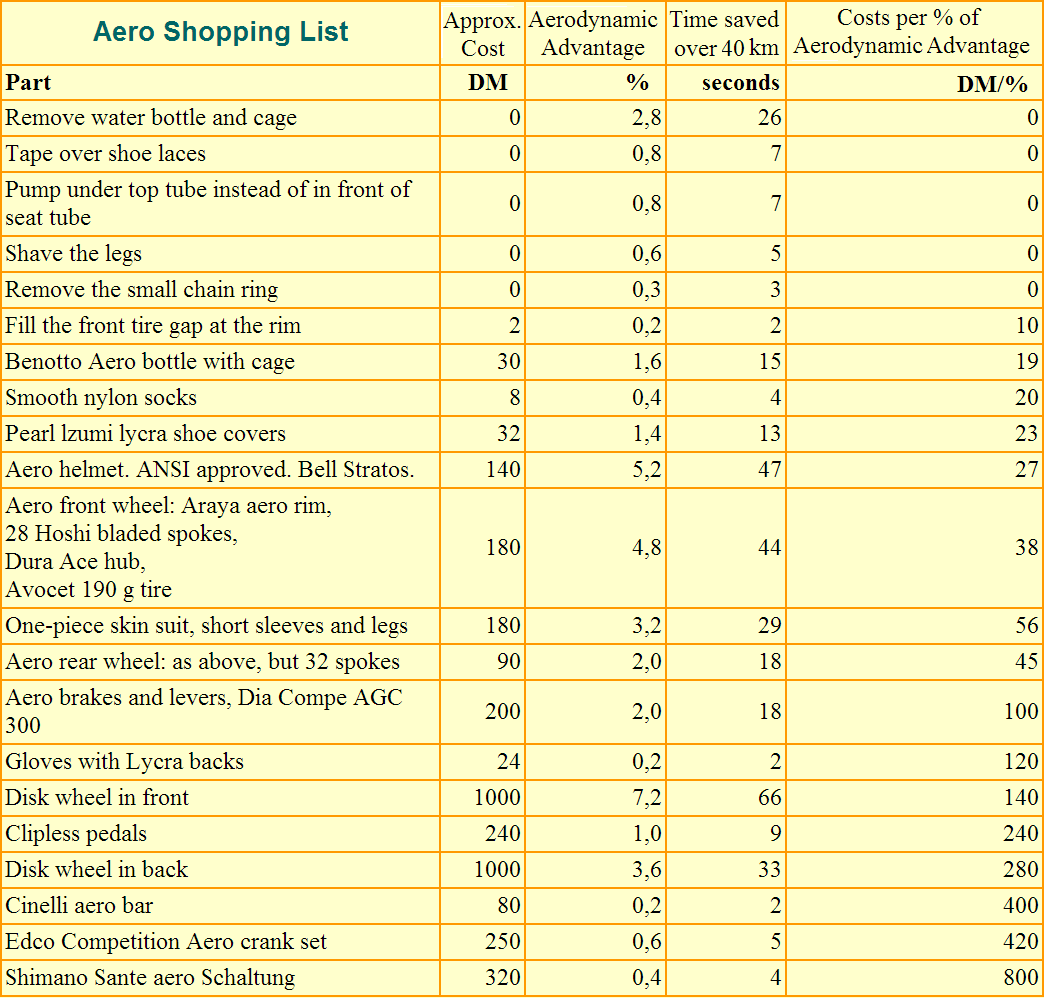 What is aero worth? A shopping list by Rainer Pivit of the improvement
in drag from various modifications. (Cost is in German Deutsch marks.)
Multiply the % advantage by 250 watts to get an average racing watt savings value,
or multiply by 100-200 watts for a slower commuter.
Table credit: http://sheldonbrown.com/rinard/aero/aerodynamics.htm
click on image to enlarge

With a generic Cd reduction of 0.7 for a front sphere, and 0.35 for a rear tail, is it worth trying to come up with a practical bike tail shape?  With a more enclosing bodywork, most of the items in the above chart don't matter, (I can wear street clothes), and the performance takes a large step up.  The human speed record enclosed bikes are traveling at 80 mph, and I've read several reports from velomobile riders of commuting in the 30 to 40 mph range (using human power only).  Weather wouldn't matter very much either.  But it would be difficult to ride through mud, or to do frequent stops and starts.  It would not be as well suited for Vermont roads and I couldn't put my feet down, I would probably have to get out and push it along occasionally.  Would a practical body shape maintain laminar flow all the way to the tail? 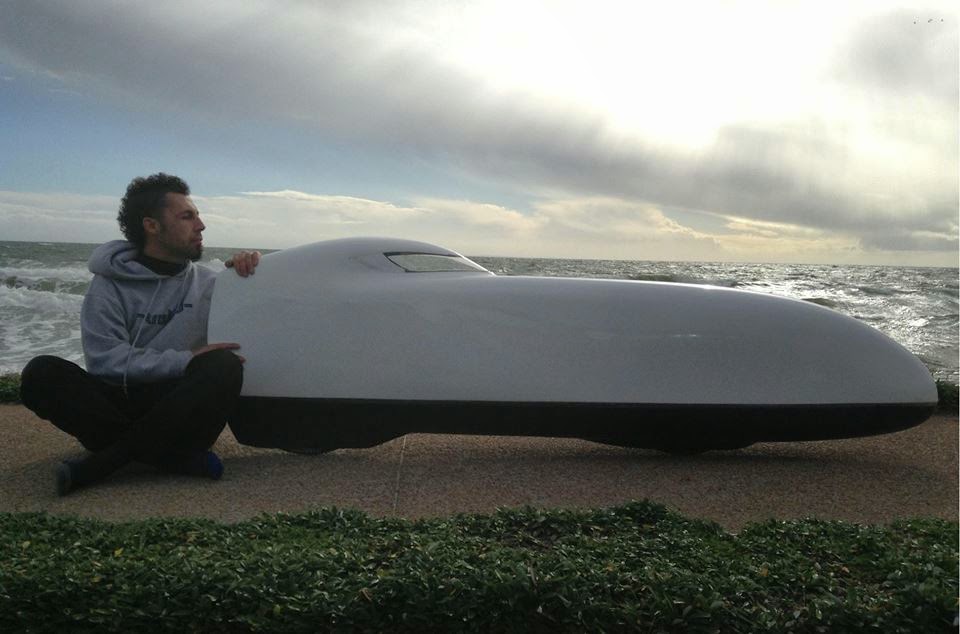 To give you an idea of the frontal area of the speed record bikes-
most of the three wheel velomobiles are about twice this size.
Photo credit: Trisled, Australia

Velomobiles do work quite well in a more paved situation.  I love this video because it gives a good idea of riding in a velomobile and it is also a bit of a travel show, with excellent tourist video of the area around Giessen, Germany.  They are traveling 4 mph up hills, averaging about 18 mph, and hitting 50 mph downhill (without electric motor):
Velomobile meeting Giessen 2010, Video credit: Wilfred Ketelaar

I still seem to be working towards an Ultra Light Vehicle in a way, and it still seems like two wheels is the best compromise for my use in Vermont.  The body compromise might be that the body work only has to be done well in the front, and can have smoothly discontinuous sections in behind, so that I can still put my feet out.  Compare the bulbous shape of the 2014 Le Mans race car below with the 1970 version above.  There are several rounded shapes over the main components that flow into each other, with all sorts of slots and vents in the bodywork to make this work.  It is not very smooth, but undoubtedly has spent a lot of time in the wind tunnel.  The emphasis has been placed on minimizing frontal area, and less on streamlining: 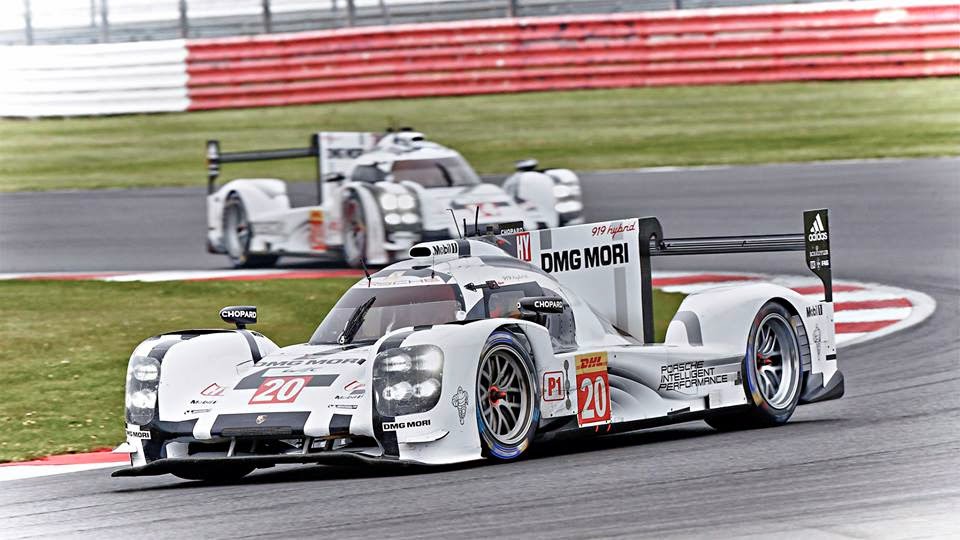 This seems like the most productive way to go for a street errands bike.  Maybe aerodynamic panniers that divert the cold winter air? In many respects this plan is very similar to town energy committee goals for buildings- first reduce the energy needed (i.e. conservation- by a smaller house or less vehicle frontal area), second make the energy you do use more efficient (a better heating system or vehicle aerodynamics), and then third add renewable energy.

The next post in this aero series will look at taxifiets, the ELF, velomobiles, bubbles, some German project bikes, and other things on the road.
Posted by Karl K at 9:54 PM